Group of adults use kids to steal $3,200 from Oakville home renovation store 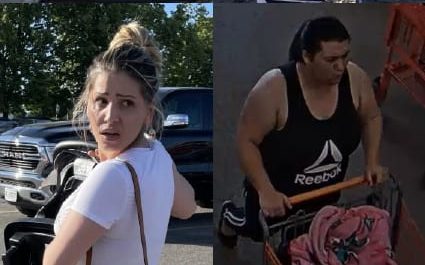 Halton Regional Police are asking for the public's help in identifying four adults who used their kids to conceal stolen items from Home Depot in Oakville. HRPS IMAGES

Halton Regional Police are looking for a man and three women who used four children to help conceal $3,200 of items and then walk out of an Oakville renovation store.

The group walked into the store’s electrical department where the four adults proceeded to load two shopping carts with electrical wire, two fans and two water bottles, valued at over $3,200.

The four adults hid the store items with bags, kids blankets and the kids themselves before leaving the store without making any attempt to pay.

Suspect 1 – Is a male in his 40s and is approximately five-foot-10 with a large/heavy build. He has short black hair, and a trimmed beard/moustache and was wearing a blue/white/grey striped golf shirt, blue shorts, red sneakers and had a tattoo on his right forearm.

Suspect 2 – Is a female in her 40s and is around four-foot-10 with a heavy build and brown hair in a bun. She was wearing a blue/white striped t-shirt with camouflage tights, sandals and a brown shoulder strap purse.

Suspect 3 – Is a female in her 30s and is approximately five-foot-10 with an average build and long dirty blonde hair. She was wearing a white t-shirt with Reebok across front, a knee length jean skirt, blue slip on shoes and a white shoulder strap purse with a flower pattern.

Suspect 4 – Is a female in her 30s who is approximately five-foot-seven with a heavy build and long black hair. She was wearing a black tank top with Reebok written on the front in white along with the company’s symbol. She also had on black pants with two white stripes down the sides and black slip on shoes.

The four suspects are said to be driving a 2007 gold/brown colour Pontiac minivan with the Ontario Licence plate – CVKS224.

Anyone with information regarding this investigation is asked to contact Halton Regional Police Service at 905-825-4777, ext. 2216.