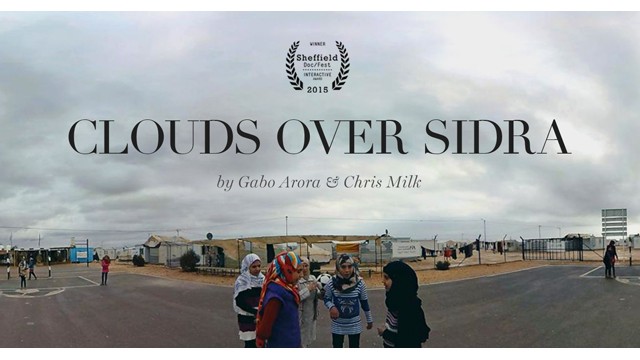 When news broke that Canada would be welcoming Syrian refugees to the country, reactions were mixed and while some expressed delight at the news that Canada would extend a helping hand to people in need, others protested the benevolent (and, many would argue, necessary) move.

While refugees–Syrian and otherwise–have been a part of the evolving fabric of Canadian society for some time, a new film is screening in the city that will immerse viewers in the story of a young refugee girl living in a camp in Jordan.

The Sidra Project, which is being presented by the city’s Culture Division, is a collaboration between the United Nations and Artscape (a Toronto-based not-for-profit organization that works with developers to create hubs for local artists).

Through the use of virtual reality technology, viewers will be able to watch the short film Clouds Over Sidra, a film that depicts life inside a Jordanian refugee camp through the eyes of a 12-year-old girl named Sidra. The project aims to immerse viewers in the experience by placing them in the centre of the camp through a 360-degree experience.

If you’re interested in experiencing the film, you can do so on Wednesday, Dec. 14 in the Great Hall of City Hall at 6:00 p.m.