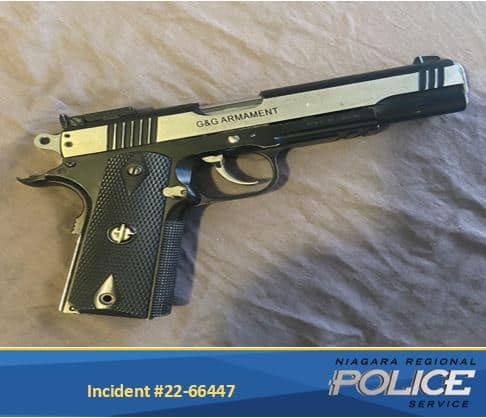 A man from Grimsby was in custody after an hours long standoff with police inside his condo.

Around 8:30 a.m. on June 20 Niagara Regional Police responded to a condo near North Service Rd and Winston Rd for reports of an armed person.

Investigators came to believe a man was strutting about the lobby while armed with a pistol. Witnesses told the police the man “retreated” inside the building to his apartment.

Uniformed cops held the man inside his condo until the Emergency Task Unit, K-9 police dogs, detectives and negotiators arrived.

The negotiators talked the man down for four hours until they finally secured a peaceful surrender. No one; not cops, civilians; neighbours or the man himself, was harmed in the standoff.

The detectives later got a search warrant for the condo and found a fake black and silver pistol in the home. Under Canadian law replica firearms are treated as though they were real if used in the commission of a crime.

David McDonnell, 29 of Grimsby, is charged with possession of a weapon for a dangerous purpose.

McDonnell remained in custody until a bail hearing on June 19 at the Robert S.K. Welch Courthouse in St. Catharines.Following the hearing McDonnell was released, but must appear again on July 19.