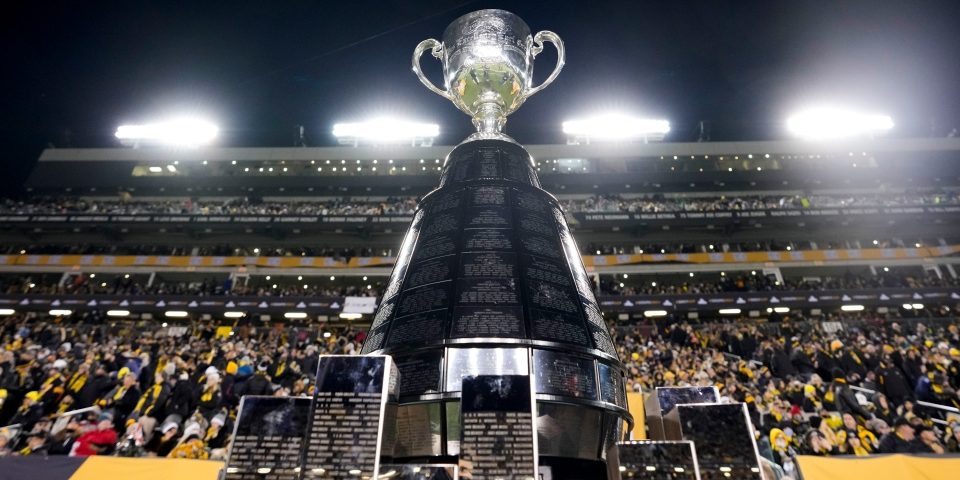 The Grey Cup is displayed prior to the 108th CFL Grey Cup between the Hamilton Tiger-Cats and the Winnipeg Blue Bombers in Hamilton, Ont., on Sunday, December 12, 2021. (THE CANADIAN PRESS/Nathan Denette)

The result on the field wasn’t what the Hamilton community had hoped for but the 50/50 draw off the field at the 2021 Grey Cup resulted in a huge victory.

Last December, the annual Canadian Football League championship game hosted at Tim Hortons Field saw the hometown Tiger-Cats lose 33-25 in overtime against the Winnipeg Bluebombers. Despite the heartbreak, more than $200,000 was raised through 50/50 ticket sales.

We would like to extend a huge thank you to all of the Ticats and @CFL fans who helped make this happen!

“The 108th Grey Cup was a tremendous success largely because of the engagement of Ticats and CFL Fans from coast-to-coast who came to Hamilton and supported all facets of the event, including the remarkable 50/50 result being celebrated today,” said Matt Afinec, President of Hamilton Sports Group, which owns the Tiger-Cats.

“These funds represent a great legacy for the 2021 Grey Cup as they will make a real difference in our community and specifically in supporting youth across the City including in our home neighbourhood that surrounds Tim Hortons Field.”

Bernie Custis Secondary School, which is located across the street from the stadium, will receive over $65,000 to help fund its sports programs. It is the only public secondary school in Hamilton’s inner-city and the Ticats say “this funding will help ensure students have safe and up-to-date equipment, access to playing surfaces and transportation to and from practices.”

The Hamilton Bulldogs Foundation will receive over $65,000 to help further its youth nutrition program. For more than a decade, the charitable arm of the Hamilton Bulldogs Hockey Club has delivered breakfast to 21 schools in the city considered “high needs.”

“We are proud to be alongside both of these deserving initiatives,” said Peggy Chapman, Executive Director of the Hamilton Bulldogs Foundation. “This will help us continue to deliver nutritious breakfasts to local area schools through our Nutrition Program while also being able to give Bernie Custis Secondary’s sports programs a boost, all of which furthers our efforts to enhance the lives of youth in Hamilton.”

“This is a great example of how our community benefits from our partnership with the Tiger-Cats,” she added.

The Grey Cup will return to Hamilton in 2023 with expectedly higher attendance and intrigue compared to last year’s event, assuming there will not be any restrictions. Tim Hortons Field wasn’t expanded to 40,000 seats last year like it is capable of due to COVID-19-related setbacks. The overall festivities were also scaled down during Grey Cup week.