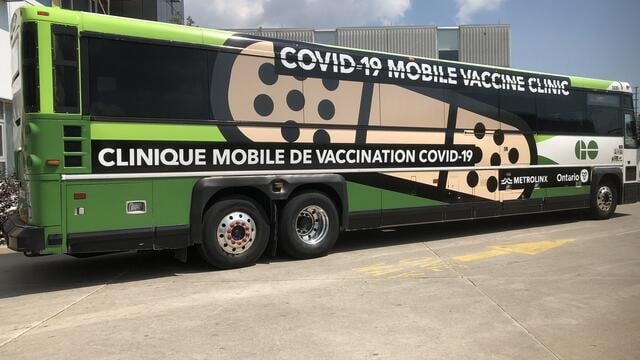 The GO-VAXX bus will be going around and ’round to three sites in Hamilton later this week.

Two GO Transit buses have been converted into mobile vaccine clinics as part of the province’s ‘last mile’ strategy to reach those who have yet to receive a first or second dose of COVID-19 vaccine. Anyone aged 12 and over can get their first or second dose on a walk-in basis, while supplies last. The buses are fully accessible.

A GO-VAXX bus came to Hamilton last weekend for clinics at Eastwood Park, which is in the L8L neighbourhood that has the eighth-highest positivity rate in Ontario at 8.21 per cent.

This week, a GO-VAXX bus will be stopping in the following Hamilton-area locations:

Anyone interested in being vaccinated should bring either a health card, or another form of government-issued photo identification such as a driver’s license, passport, status card, or birth certificate.

Dressing for the weather in case of a lineup and also wearing clothing that allows for easy access to your upper arm, such as a loose-fitting top or a t-shirt, is recommended. One should also wear a mask that covers the chin, mouth and nose.