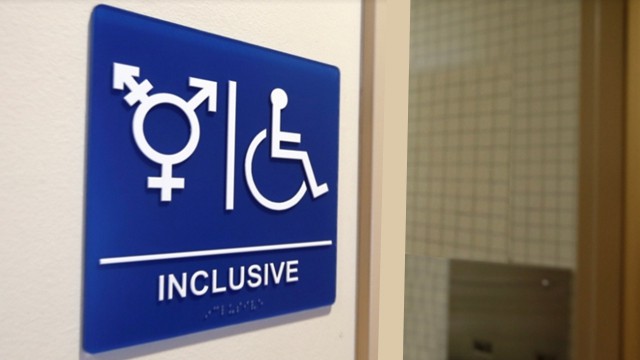 If there is one institution in our society that is demonstrating a concrete example of the state putting its proverbial foot down on how kids should behave, treat others or even dress, the Peel District School Board certainly has earned that distinction.

According to CityNews, new directives coming for this new school year under the theme of “We Inspire Hope,” include, amongst other things, something that has generated enormous controversy in the United States: the addition of gender-neutral bathrooms.

Instead of just having the standard boy’s and girl’s washrooms, apparently a third type of bathroom will simply be called the “Inclusive Washroom.” It will be available for those who self-identify as a different gender than the one they were assigned at birth and will reflect inclusion for the transgender community.

I understand where this is coming from, and it’s not surprising. We’ve seen an upgraded sex-ed curriculum to reflect the existence of gender identity. Gay-straight alliances are popping up in schools all over to talk about it, so it’s a reality that people have to adjust to. I just hope they don’t use that silly little pictogram of a figure that has a little man on one half and a little woman on the other half, showing one side wearing a dress and the other pants (you can find such examples here). That actually, to me, seems quite condescending (the picture at the top of this article is more appropriate, I think).

It’s important to think about how individual self-identification is going to become more prevalent in all facets of our lives over the next few years. The Ontario government is already looking at eliminating gender as a part of identification on government issued IDs.

I was at a meeting on the weekend covering a political party consultation meeting, and they were saying that the inclusion of gender identification for party members would become a thing of the past. Whether you’re open minded about people eschewing traditional gender labels or a traditionalist who is appalled by what is happening, one thing that is certain is that we are changing our approach to gender identity. It’ll take time for some to adjust, but the momentum isn’t stopping.

While there is a gray area in terms of how one might feel about this new era of inclusion, I find another one of the new directives from the PDSB to be too politically correct. The board, as of September, is looking to change the dress codes in order to ban logos that may be offensive to certain indigenous communities, such as the logos for the Chicago Blackhawks, Atlanta Braves, Cleveland Indians and Washington Redskins.

Isn’t it more effective for public pressure to be put on those specific teams to change their logos? If you’re looking to improve the dress code to root out forms of discrimination, you might as well implement school uniforms across the board in all Peel schools to prevent logos of any nature from appearing on school grounds, lest they offend even one person.

As an aside, if the Chicago Blackhawks were looking to change their logo, how about this one? It’s an actual hawk, it looks way cooler, and the feather patterns can be passed off as the feathers on the hawk, not as part of a Native American headdress.

Finally, it used to be that if you were in the education field, being an educator was pretty much your life. You were expected to be invested in the kids you were teaching or the school you worked at because a school was more than a workplace, it was part of the community. The new directives take a shot at changing that too. As of September 6, teachers and administrative staff are prohibited from sending work emails between Friday at 6 p.m. and Monday at 7 a.m. Basically, they’re looking to reduce the stress levels of teachers and school administrators by locking them out of doing work (since we all use email to work now) on the weekends. While some really dedicated teaching professionals and staff may recoil at this horror, I think it’s an acknowledgement that they’re people too, and like all of us they need some weekend downtime to disconnect and recharge their batteries for the coming week.

What do you think of these new directives from the Peel District School Board? Love ‘em or hate ‘em?