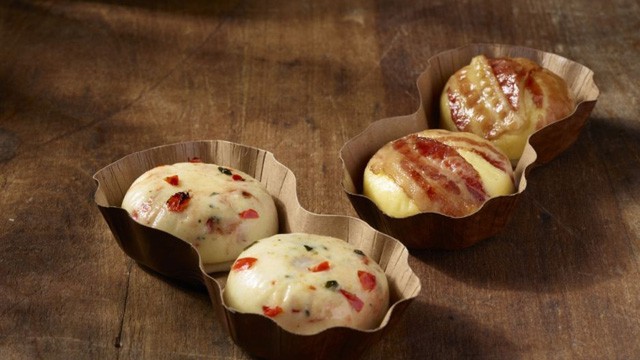 If you like to stop in at Starbucks for your morning coffee, you might be happy to hear that a strange, low-carb breakfast snack might be making its way into your local store soon.

Starting next week, the Seattle-born coffee giant will be releasing its new Sous Vide Egg Bites, morning snacks described as “perfectly cooked eggs with wholesome ingredients,” in the U.S. A Starbucks representative told insauga.com that the snack should be launching in Canada at a later date.

The breakfast dish, though slightly unusual, is apparently the product of research that revealed customers were looking for something with less bread and more protein.

“Time and time again, we learned that customers were ordering our breakfast sandwiches without the bread or requesting more vegetarian options,” said Eveline Chao-Rivera, Starbucks brand manager, in a news release. “We knew that we had a very specific need to satisfy.”

According to Starbucks, the brand created the dish in conjunction with Cuisine Solutions, a company with expertise in sous vide cooking (a technique where vacuum-sealed food is submerged in water and cooked at a precise and consistent temperature).

“Sous-vide cooking offers an unbelievable texture to food unlike anything else,” Chao-Rivera said. “It makes eggs velvety and creamy – almost like you’re eating something indulgent, but you’re not.”

So, what do you think, Mississauga? Will you beat a path to your nearest Starbucks to sample these low-carb breakfast bites?