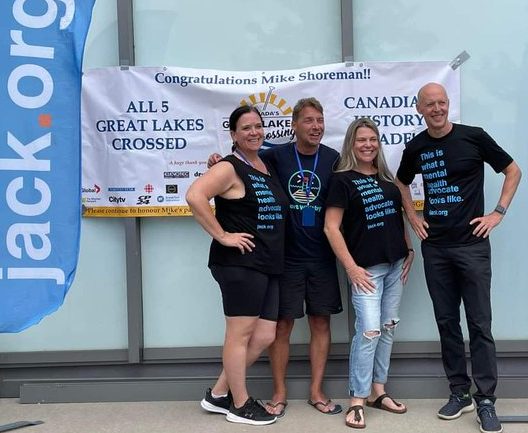 Has life changed for Mike Shoreman since he completed his epic great lakes adventure?

“It’s been tough catching my breath,” said Shoreman, who has been interviewed by news outlets on both sides of the border since he finished his summer-long crossing of all five of the Great Lakes by paddleboard last month. “It’s been a lot all at once.”

Not that the Whitby man is complaining.

“It’s all about awareness. People have found out about mental health and the mental health crisis and ways they can help through this. I’m very thankful.”

Shoreman has been able to raise about $70,000 so far for Jack.org, a group dedicated to helping kids facing mental health issues, an issue near and dear to Shoreman, who had to face his own demons after being diagnosed with Ramsay-Hunt Syndrome in 2018.

The disease, a chronic condition that caused his face to collapse on the right side and resulted in hearing impairments, speech problems and a loss of balance meant the end of his career as a paddleboard coach, the loss of his business and his social life and put him in a spiral of depression that resulted in him trying to take his own life six months later.

The next day he started his path back.

Shoreman remembered how he felt then – scared and alone – and did not want others to feel that away, especially children. “Mental health is the leading cause of health related death for young Canadians and a big part of that is that is because we still aren’t where we need to be in terms of stigma and shame,” he said. “I think Canadians look at their own kids and think ‘my kids are okay, so everyone’s kids are okay.’ Unfortunately, that’s not the case and mental health organizations are struggling to keep up with increases in access to services they provide.”

Since the lake crossings Shoreman has enjoyed many interactions with young people facing depression, including “a lot of beautiful hand-written notes from kids.”

“It’s been amazing to see kids respond the way they have,” he said. “Mental health struggles and depression sets in with many people when we’re about 11, 12 year old. It’s very hard for kids to deal with at that age.”

Shoreman was speaking at the Abilities Centre in Whitby Sunday, who hosted a Mental Health & Wellness Fair which also served as a fundraiser for Jack.org, a charity that has been raising awareness and operating programs for young people facing mental health issues since 2013.

Jack.org founder Eric Windeler, who was at the fundraiser Sunday, said the catalyst for starting the organization was the death by suicide of his son Jack in 2010.

He and his wife started a three-year pilot program to see what kind of help they could provide and also made a significant contribution to Kids Help Phone. The pilot program, which ran for three school years, led to the forming of Jack.org.

“There were a lot of suicides the previous years and we felt young people were not being included in much of the research.”

Jack.org currently raises about $10 million per year, which goes to programs, peer-to-peer education and youth-led conferences as the group trains and empowers young leaders to revolutionize how mental health is viewed and treated.

Shoreman chose the charity for his fundraising campaign last year when he attempted (unsuccessfully) to cross Lake Ontario. Armed with a year’s worth of fitness and knowledge and a team of some 40 drivers, navigators, nutritionists, etc. to help, he “doubled down” and decided to tackle all five lakes in 2022 to raise money and awareness for mental health, particularly as it applies to children.

On August 20, after 21 hours on the water paddling the 52 kilometres from Youngstown, New York to Toronto’s Harbourfront Centre, his mission was completed.

“I hope that kids and young people continue to dream big and work hard to achieve those dreams,” Shoreman said. “And I hope they work to achieve things that important to their own mental health.”

His fundraising campaign for Jack.org will remain open for the rest of the year with Shoreman hopeful he can reach his goal of $100,000.