From Brownfields to Bustling Waterfront: How Developers are Preparing Inspiration Port Credit 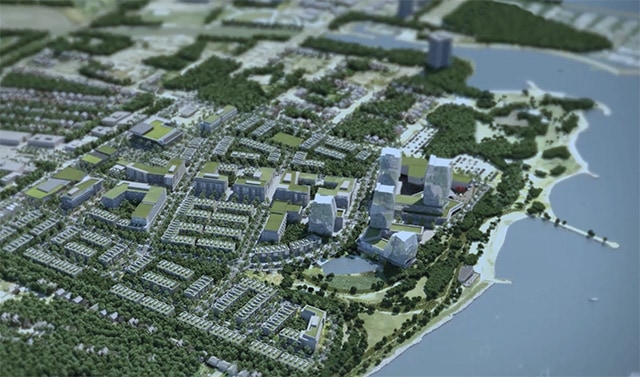 Inspiration Port Credit is one step closer from dream to reality.

With the deal closed and the draft plan in order, the next step for development consortium West Village Partners (WVP) is to make sure the land will be suitable for residents.

The 73-acre site stretches from Lakeshore Rd. W. to the lakefront and Pine Ave. to Mississauga Rd. It was the former site of a brickworks until 1932, and an oil refinery owned by Texaco until the mid-1980s before being bought by Imperial Oil. The land sat idle for years and residents wondered what would be done with it.

The City of Mississauga reached out to residents for ideas and in 2015 released Inspiration Port Credit, a report which called for the site to be revitalized as “a lakefront urban neighbourhood of landscapes, meeting places, living, working, and drawing people to the water’s edge to play.” Living, of course, means the plan includes residential buildings. The plan, we now know in concrete terms, includes about 2,500 housing units ranging from townhomes to mid- and high-rises. But it’s not just a simple matter of building the homes.

Environmental remediation, paid for by WVP, is being carried out in order to make the site a safe place to live.

The Ministry of Environment is heavily involved in the remediation process, which occurs in two key phases.

In phase one, qualified environmental consultants prepare a record of site condition. In layman’s terms, the first step is to examine the development site and make note of any potential contaminating activity or other environmental concern that requires moving on to phase two.

In phase two, the qualified consultants find where the contaminants are and take action to reduce them to standard levels or those set by a risk assessment. A risk assessment looks at potential health risks to people and the overall environment of developing a given area. When redeveloping a former industrial site for more sensitive uses such as a residential area, this phase is mandatory.

One of the companies within the WVP consortium is Kilmer Group, a company which invests in and leads environmental risk management and development projects, including brownfield cleanup.

Brownfield is defined as “vacant or underutilized places where past industrial or commercial activities may have left contamination (chemical pollution) behind.”

David Harper, president of Kilmer-Brownfield and a leader in the Canadian Brownfield Network (CBN), is responsible for environmental risk management with Kilmer Group. He is a specialist in remediation and risk management who has consulted on over 200 brownfield projects.

Harper says it’s important to understand that the project is still in early stages, with the draft plan just submitted Monday. There’s a long road ahead. Kilmer Group will be in touch with stakeholders as that work moves forward, he said.

“We’ll be working with the Ministry of Environment, as well as the City of Mississauga, as well as the community on various steps during . . . the remediation. There’s a lot of third-party involvement.”

Imperial Oil, as the former owner of the site, has also provided crucial information.

“In the negotiation for the land, the former owners did exhaustive . . . environmental assessments. That information was provided to us in the purchase process for the property,” Harper said.

The information is extensive, including groundwater and soil quality. The primary concern, confirmed by information from the previous owner of the site, is petroleum hydrocarbons, which Harper expected to find on the site of a decommissioned oil refinery.

A statement by Imperial Oil in 2014 said, after a year-long environmental assessment:

The [assessment] concluded that there are no physical site conditions which would prohibit redevelopment for commercial, medium and/or high density residential, and open space uses, but at a higher cost than a similar greenfield property.

Imperial Oil found no groundwater contamination that would pose a risk to surrounding lands or Lake Ontario.

Environmental consultants sorted through the information for Kilmer Group and designed a remedial approach for the site. That approach, though, will still be getting input from city officials and residents in Mississauga. “It by no means is final right now,” Harper said.

“What it identified [is] most of the impact on the site related to petroleum hydrocarbons was in the near-surface environment . . . the upper three metres of the site. Much of our development plan will take place in that upper three meters. There’s significant overlap between the materials that need to be moved for development and those that are impacted by the former use.”

In other words, remediation and redevelopment overlap, but remediation comes first. “There are areas of the site that were more impacted than others [by] former operations. That’s the focus of the remediation. Other [areas] will be dealt with through construction.”

The itinerary for now is to focus on that site assessment and remediation.

“We’ve been doing this now for more than 10 years. We use different technologies for different approaches. We haven’t yet determined all the technical components of our remediation approach at this time. ”

The development itself, he said, could take 10 years.

“We have been in the community talking about this stuff. There will be more engagement to come as we get into the site over the coming months with planning approvals.”

The Town of Port Credit plans to hold an open town hall meeting concerning this site, as well as the Harbour Marina Lands, on May 23 at Clarke Memorial Hall. WVP expects to have an application prepared for the planning and development committee in June.