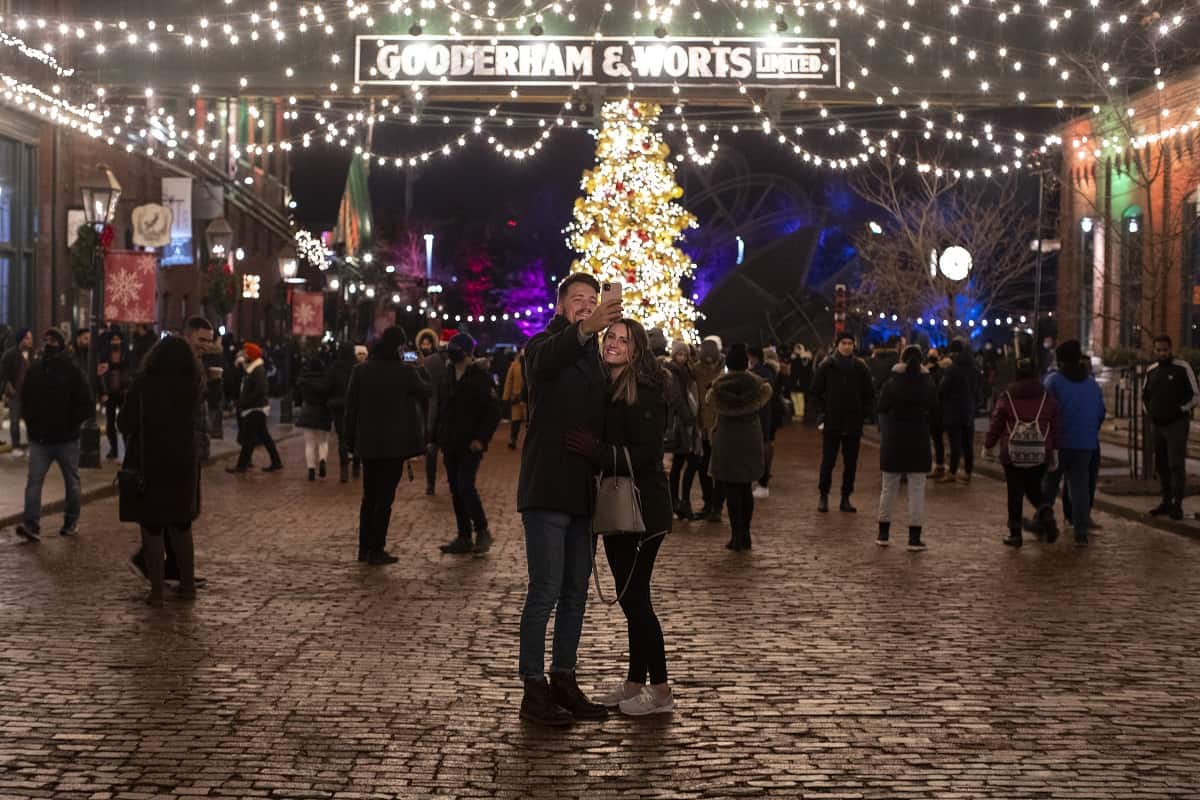 Visitors take photos in Toronto's Distillery District, on Saturday, December 19, 2020. Almost half of Canadians plan to abandon social distancing during holiday gatherings and hug, kiss and shake hands with friends and family, a poll shows. THE CANADIAN PRESS/Chris Young

OTTAWA — Almost half of Canadians plan to abandon social distancing during holiday gatherings and hug, kiss and shake hands with friends and family, a new poll shows.

The poll by Leger in collaboration with The Canadian Press found that 45 per cent of Canadians say they will “greet others with a handshake, hug or kiss” at Christmas parties and other holiday gatherings.

In Ontario, the number prepared to ditch social distancing over the winter vacation rose to 50 per cent, compared to only 37 per cent in B.C.

Among 18- to 34-year-olds, the proportion comfortable with hugging friends and relatives over the holidays rose to 52 per cent.

Christian Bourque, Leger’s executive vice-president, said the finding suggested that Canadians may be becoming complacent about the risk of COVID-19 because they are vaccinated.

Forty-nine per cent of Canadians confessed they were not afraid of catching the virus.

He said he found the findings surprising because, while “taking chances is cultural in the U.S.,” Canadians tend to be more cautious. He said the bold attitude may be due to “COVID fatigue” or because many Canadians now think: “All of us are vaccinated in our house, what’s the problem?”

At the same time, 81 per cent of Canadians asserted that they would respect all “remaining” safety measures during the holiday season.

The poll of 1,547 Canadians between Friday and Sunday cannot be assigned a margin of error because internet-based polls are not considered truly random samples.

Forty-seven per cent of Canadians say they would ask people if they are vaccinated before inviting them to a holiday party.

And only 35 per cent said they would invite someone who is not fully vaccinated into their home.

More than a third plan to celebrate with more friends and family, though not at pre-COVID-19 levels.

Canadians continue to tighten their belts with 46 per cent saying they had no plans to spend more money over the holidays than last year. Only seven per cent said they were planning to spend “a lot more.”

Little more than a third of Canadians said they were planning to do their shopping at the mall, like they used to, with 42 per cent saying they would stick with shopping online.

Sixty per cent of Canadians would shop around for the best price, and only 22 per cent said they would be prepared to spend “a little more” to support local retailers.

The poll suggests that Canadians are not flocking to fly to sunny spots during the peak holiday period, despite the introduction of vaccine passports.

Only 18 per cent plan to get on a plane to see friends and family during the vacation and nine per cent have plans to fly to a vacation spot during the holiday.

While the federal government’s handling of COVID-19 receives a cautious thumbs-up from the Canadian public, confidence in some provincial premiers remains weak.

This compares with 77 per cent of Quebec residents who think Premier François Legault has done a good job fighting COVID-19.

Sixty-three per cent of Canadians say they are satisfied with action taken by Prime Minister Justin Trudeau’s government to fight COVID-19.

A third are dissatisfied with the government’s handling of the crisis.

The poll found that only 51 per cent of Canadians think that the worst of the pandemic is over.