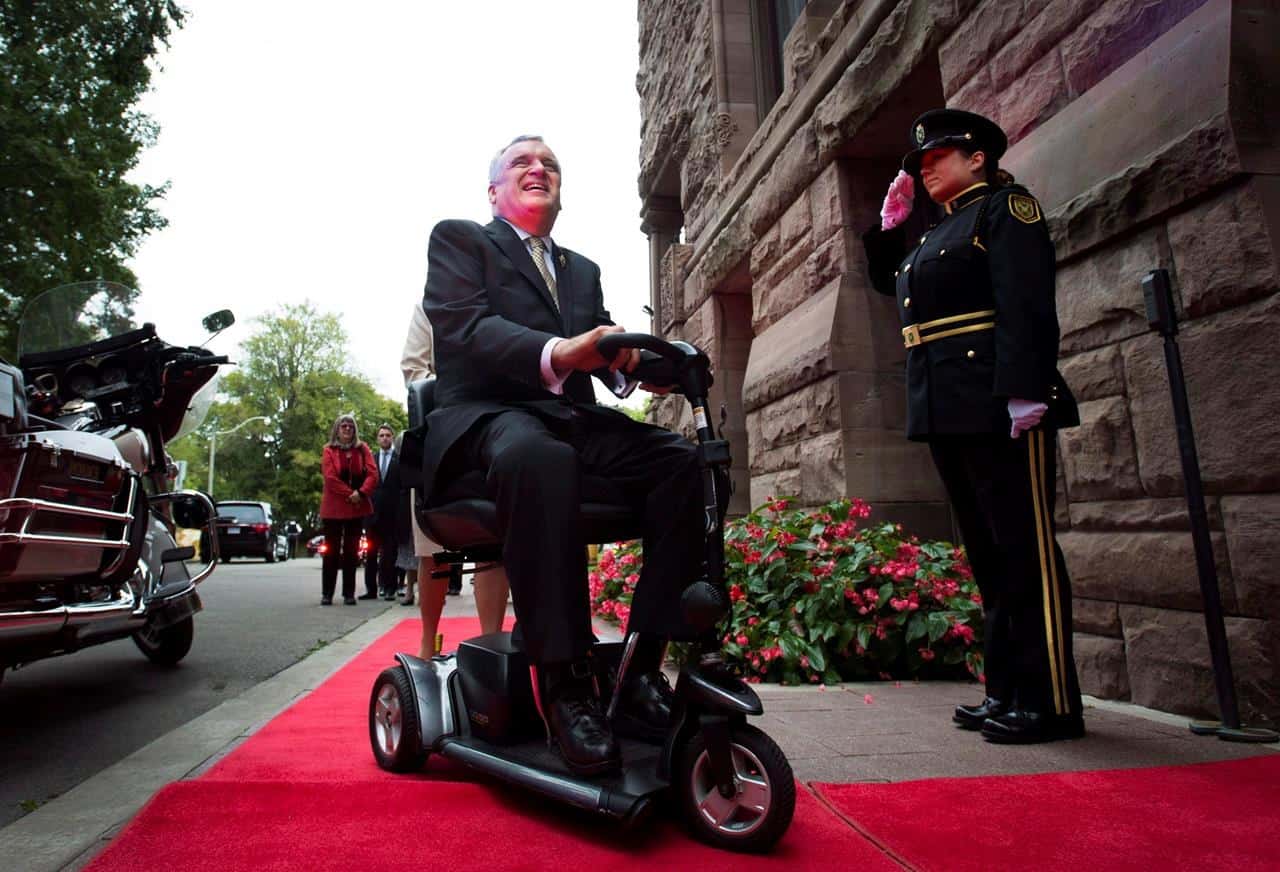 David Onley, who emerged as a champion of disability rights both during and after his stint as Ontario’s 28th lieutenant-governor and former newscaster and journalist, has died. He was 72.

Word of his death came in a Saturday evening statement from Lt.-Gov. Elizabeth Dowdeswell, the current holder of Ontario’s viceregal office and Onley’s successor in the role.

She provided no details about the timing or cause of his death but said he is survived by his wife Ruth Ann and three sons.

Dowdeswell, who described her predecessor as a “valued friend and colleague,” said Onley used his status as the province’s first lieutenant-governor with a physical disability to raise awareness of and help break down barriers facing other disabled residents.

“Whenever Mr. Onley entered a room, those present saw beyond physical limitations. They saw a person they liked and admired,” Dowdeswell said in the statement. “So when his trusted voice defined accessibility as that ‘which enables people to achieve their full potential’ by allowing them to participate meaningfully in social, cultural, and economic life, Ontarians not only heard the words. They saw the essential truth in the embodiment of the person who said them.”

Onley was appointed Ontario’s lieutenant-governor in 2007 and remained in the position for seven years.

Dowdeswell said he worked to expand existing literacy and education programs for Indigenous Peoples and emphasized the importance of reconciliation efforts, but said accessibility issues remained the “overarching theme of his mandate.”

Onley used a motorized scooter throughout his life after contracting polio as a child and frequently drew on his lived experience when highlighting existing accessibility barriers in all facets of society.

Dowdeswell said his efforts to draw attention to such issues predated his time in government and could be traced back to his years as a television reporter.

“Early in his media career, camera shots often focused only on his upper body, but Mr. Onley insisted that he be shown in his mobility device,” she said. “Not content to simply lead by example, he was an active advocate on disability issues, particularly in the area of making the economic case for improved access to employment for people with disabilities.”

Dowdeswell said he continued to serve as a special adviser on accessibility within the provincial government after leaving office.

But perhaps his most prominent advocacy work came in March 2019 when he completed an independent review of Ontario’s accessibility law, the first of its kind tabled in Canada.

Onley’s scathing report on the Accessibility for Ontarians with Disabilities Act offered a withering indictment of nearly all aspects of the law and concluded the province was nowhere near its stated goal of ensuring universal accessibility by 2025.

At the time the report was released, he told The Canadian Press that disabled residents were barred from full inclusion in the province at nearly every turn, likening some of the barriers they face to long-abolished Jim Crow laws that perpetuated racial discrimination in the United States.

“This is a matter of civil rights, and people with disabilities are being discriminated against on a daily basis in multiple ways,” he said. “We don’t like to use the word discrimination because it gets tossed around, but what other word describes the situation? It is discrimination.”

Kathleen Wynne, who served as Ontario’s premier during much of Onley’s term, shared condolences on Twitter.

“Inexpressibly sad to hear that our world has lost David Onley,” she wrote. “A gentle, intelligent, compassionate man. Much love to his family and friends.”

This report by The Canadian Press was first published Jan. 14, 2023.