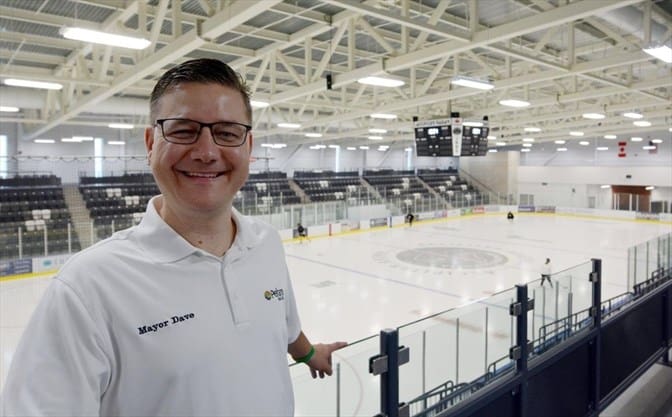 At the moment, the NDP have three-quarters of Niagara Region’s provincial ridings painted orange. Now they want a clean sweep.

Outside the Pelham Public Library Maple Acre branch in Fenwick, Horwath was joined the other NDP MPPs – Niagara Centre’s Jeff Burch, St. Catharines’ Jennie Stevens and Niagara Falls’ Wayne Gates (in his first public appearance since a serious car accident two weekends ago) – to livestream the announcement. (It can be seen on Jeff Burch’s Facebook page.)

Pelham served as Pelham’s Mayor and Niagara Regional Councillor from 2006 to 2018 until the municipal election saw a clean sweep of everyone on the Pelham Council, including the mayor.

Since that time, he has served as the Development Director for the Niagara Family and Children’s Services Foundation.

A graduate of Notre Dame College School in Welland, Augustyn, who will be acclaimed as the candidate at the end of November, is probably best known in Pelham for his efforts behind the construction of the Meridian Community Centre.

In announcing him, Horwath said, “The NDP’s Niagara MPPs and I are thrilled to welcome Dave Augustyn to the team. Dave loves Niagara – he is a community champion who is determined to make this region the best place in the world to live, work, raise a family, and retire.”

During his turn at the mic, Augustyn explained the importance of the location by the Maple Acres Library, remembering all too well the community efforts to rebuild the ailing building, as well as add an expansion.

He segued that into his word, noting one of the first things the Doug Ford government did when it came into power in 2018 was cut library services.

“They didn’t understand the public good of libraries,” said Augustyn, “and I’m still not sure they understand it.”

“Sadly, the current government’s cuts of services for the common good before the pandemic are now back. And they are going back to cutting now.”