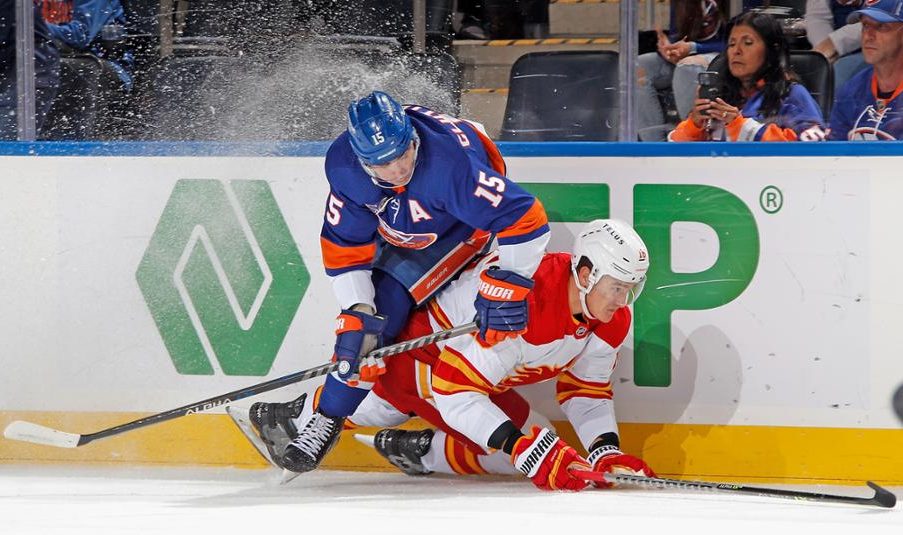 Call Clutterbuck, the former Oshawa General and now veteran New York Islander and the man with the coolest name in pro sports, is now the NHL career hits leader after recording bodycheck number 3,633 in Monday night’s game against the Toronto Maple Leafs.

Clutterbuck, who hails from Welland and spent a couple of seasons patrolling the wing on young superstar John Tavares’ line with the Generals, passed recently retired Los Angeles Kings captain Dustin Brown for the record.

When asked after the game the secret to being an all-time hits record-holder, Clutterbuck shrugged and chalked the record up to being around the league a “long time.”

“It’s what I do,” said the man who has accumulated all that punishment on opposing players while averaging just five minor penalties a year over the past three seasons. “It’s validation, I guess.”

Teammate (and former Leaf) Matt Martin holds the single season hits record (and four of the top five spots on the list) with 382. Clutterbuck, who is approaching 1,000 career games, has the 6, 8, 9 and 10 places on the single season list. Martin is third all-time, followed by future goal scoring king Alex Ovechkin in fourth.

The Islanders beat the Leafs 3-2 in overtime.

Cal Clutterbuck has the new NHL record for hits!

(the statistic has been kept since the 2005-06 season) pic.twitter.com/UOTkKfp1ha