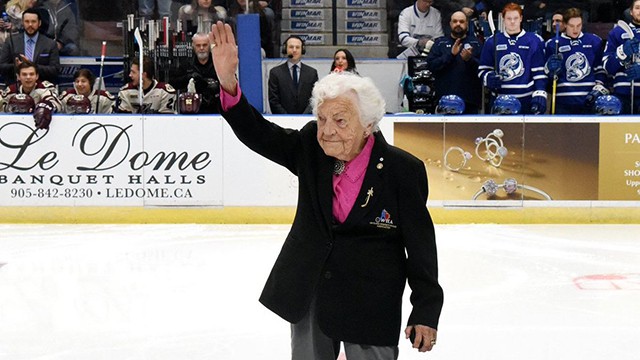 The province says the Order of Ontario honours individuals whose exceptional achievements have left a lasting legacy in the province and beyond.

McCallion, who served as mayor of Mississauga from 1978 until her retirement in 2014, will turn 100-years-old on Feb. 14, 2021 (which also just happens to be Hazel McCallion Day across Ontario).

The appointment to the Order of Ontario is just one honour that the former mayor will enjoy in 2021.

This year, the city will be marking McCallion’s milestone birthday by officially renaming the Central Library the Hazel McCallion Central Library. According to the motion that was passed regarding the renaming of the library, McCallion served the people of Mississauga for 53 years, as she held office as reeve and mayor of Streetsville prior to amalgamation and also served as a councillor before being elected mayor.

McCallion currently serves as the Chancellor of Sheridan College—the college’s Mississauga campus is named after her—and acts as an advisor to the government of Ontario on municipal matters.

The University of Toronto—Mississauga (UTM) campus also pays homage to the former mayor, as it’s home to the Hazel McCallion Academic Learning Centre.

In late 2020, McCallion–who has always championed health care in the city–announced that she partnered with Trillium Health Partners Foundation (THPF) to release a commemorative photo book chronicling her life and achievements as Mississauga’s longest-serving mayor.

McCallion, who led the drive to build THP’s Credit Valley Hospital site in 1976, said she will dedicate the proceeds from the sale of her 100th Birthday Book to the redevelopment of THP’s Mississauga Hospital site.

“The announcement on January 1 is special. New Year’s Day is a day for reflection, rejuvenation, and re-setting of goals and priorities. We have seen the best of Ontarians this year, and many of these new appointees are being honoured for a lifetime of service to this province, laying the groundwork of resilience and community that each one of us was called to act upon in this historic global pandemic. Let these appointees inspire you and encourage you to honour those around you by nominating them to be recognized by the province. We have much to be proud of.”

The Lieutenant Governor will bestow the honour upon the newest appointees during an investiture ceremony at Queen’s Park when it is safe to do so.

According to the province, 798 people have been appointed to the Order of Ontario since its establishment in 1986.

Appointments to the Order are made on the recommendation of an independent advisory council based on merit of accomplishments of nominees put forward by the public.