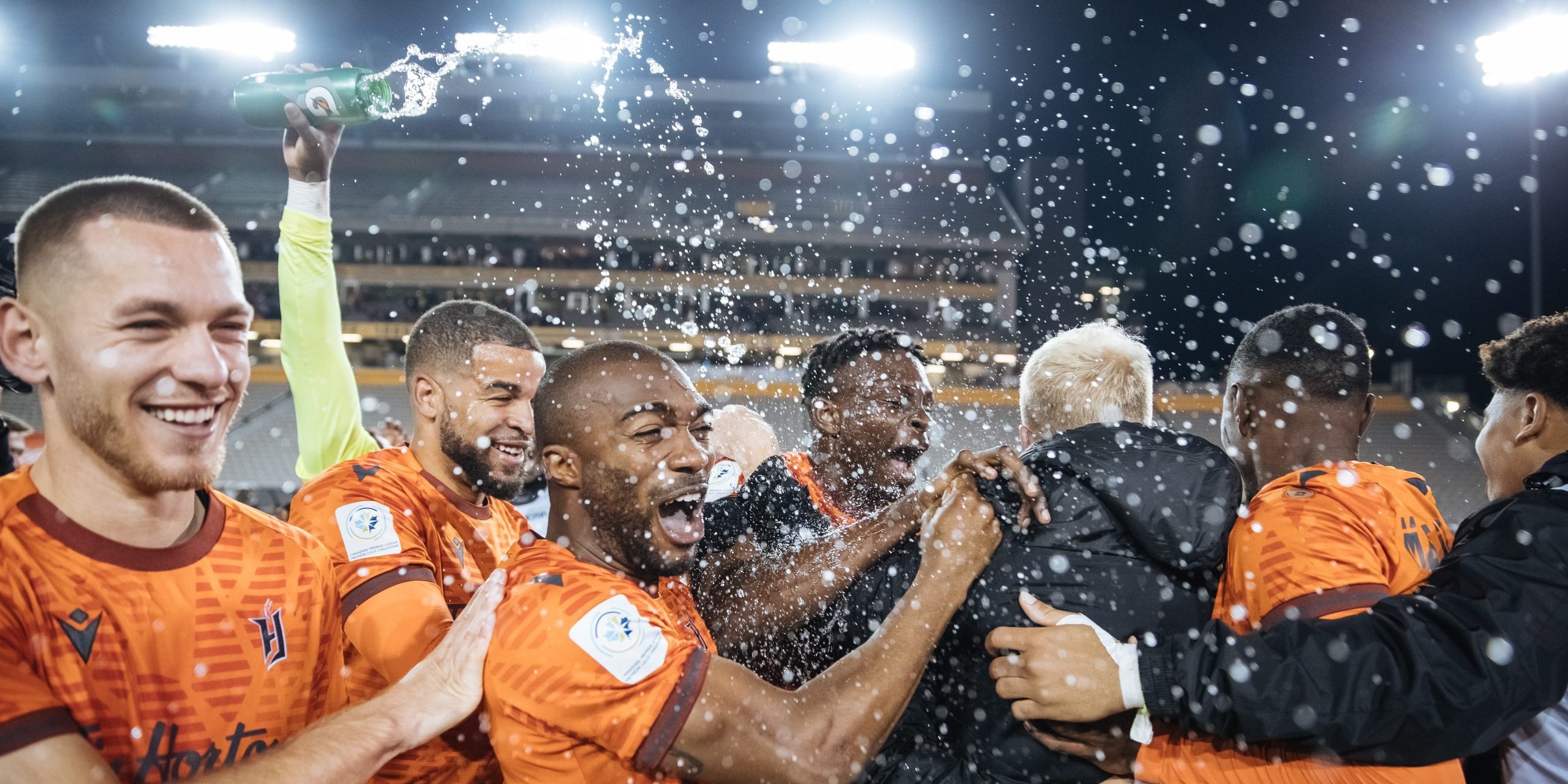 Forge FC scored twice in the final 45 minutes to beat Cavalry FC 2-1 (3-2 on aggregate) on Sunday and punch their ticket to a fourth consecutive Canadian Premier League Final — in just the fourth year of the league's existence. (Jojo Qian/Forge Football Club Hamilton)

Forge FC and Calvary FC played with a man down in the second half after each team had a player sent off, leaving even more space on the wide Tim Hortons Field pitch for Forge’s trademark attack.

The Hamilton-based club scored twice in the final 45 minutes to beat Cavalry 2-1 (3-2 on aggregate) on Sunday and punch their ticket to a fourth consecutive Canadian Premier League Final — in just the fourth year of the league’s existence.

Nearly 7,000 fans packed the lower bowl of the east side of Tim Hortons Field, although the rambunctious crowd made it feel like 20,000 — chanting from start to finish and letting the officials have it after Forge captain Kyle Bekker was shown a straight red card when he got his boot up in the 43rd-minute.

Forge wouldn’t be short-handed for long. Cavalry defender David Norman Jr. received his second yellow of the half after extending his arms and getting his hands up near the face of Forge midfielder Alessandro Hojabrpour.

When Forge has needed a big goal in a big moment over the years, forward David Choiniere has delivered, and the second leg of this CPL Semi-Final was no exception. The Montreal native sprinted down the right flank and tucked a right-footed shot into the far side of the goal, beating Marco Carducci in the 69th minute.

Six minutes later, attacker Tristan Borges dribbled his way through a Cavalry defender before being hauled down in the area. Striker Woobens Pacius would finish the play on the penalty kick, putting Forge up 2-0.

Myer Bevan cut Forge’s lead in half in the 78th minute, but The Hammers hung on to secure the victory.

Forge will now head to our nation’s capital to play for their third North Star Shield against Atletico Ottawa. The league’s best club in the regular season defeated last year’s champions, Pacific FC, 3-1 on aggregate.

The CPL Final is scheduled for 6 p.m. on Sunday at TD Place Stadium.

Achinioti-Jönsson, 26, was central to Forge conceding a league-fewest 25 during the regular season. Achinioti-Jönsson showed off his versatility transitioning from defensive midfielder to the heart of the backline thanks to his distribution skills, passing accuracy and aerial presence. He celebrated making his 100th appearance for Forge this season and led the league with 1,996 passes. His nine blocks, 29 interceptions, 49 clearances and 31 aerial duals won were the most by any Forge player during the regular season. Achinioti-Jönsson has also been nominated for player of the year and defender of the year.

Bekker, 32, had his talents on full display for Forge FC tallying two goals and five assists, and commanding the midfield with his 1,366 passes, 17 interceptions, and 17 tackles during the regular season. The Oakville native became the first player in the CPL to reach 100 games for his club after four dedicated seasons (2019-2022) as captain for Forge FC. Bekker was included in the CPL’s Team of the Week on five occasions in 2022.

Pacius, 21, turned heads in his first full season with Forge FC. The native of Terrebonne, Que., scored a team-leading 10 goals for Forge, finishing fourth among CPL goal scorers. His 39 shots were also a team-high. Pacius was named CPL player of the month for July, a month in which he scored six of his 10 goals and helped Forge to go unbeaten in five matches. Pacius was included in the CPL’s Team of the Week on three occasions in 2022, winning Player of the Week for Week 15 and has also been nominated for Best Canadian U-21 Player