When Doug Ford and his Ontario PC party took office, one of the key promises they made was to ‘put more money back in people’s pockets’ by cancelling the cap and trade program brought in by the previous Liberal government.

Ford, who mistakenly referred to the program as a ‘cap and trade carbon tax,’ revoked the tax regulation and prohibited all trading of emission allowances effective July 3. All programs currently funded through cap and trade were then cancelled, including the immediate wind down of the Green Ontario Fund.

While short term benefits such as a dip in gas prices were noticeable, although that was seen as a regular occurrence as gas stations switched blends, cancelling the program may end up costing the province more than realized.

The Financial Accountability Office of Ontario, an independent watchdog which reports to the Ontario Legislature on the province’s finances, tabled a report on the financial impacts of cancelling the cap and trade program.

The main takeaway? The cancellation of cap and trade would add an extra $3 billion to the deficit over the next four years: 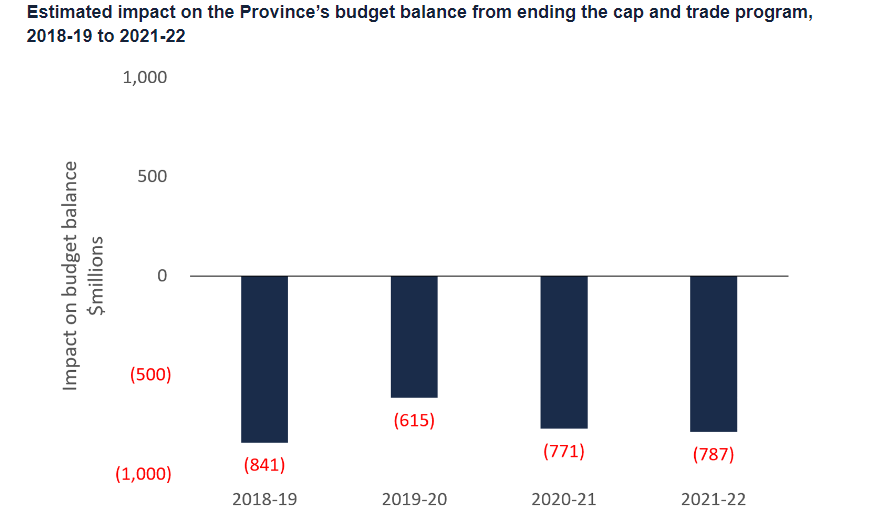 “This deterioration in the government’s budget balance occurs because the loss of cap and trade revenues will exceed the savings from cancelling the related spending programs” says Peter Weltman, Ontario’s Financial Accountability Officer, adding that a number of the cancelled spending programs funded infrastructure projects that will not provide immediate savings to the Province’s budget balance.

Not all of the cap and trade spending programs was cancelled by the province, Weltman continued, saying that remaining program spending account for about $500 million in the fiscal year of 2018-19.

By ending the cap and trade program, and barring a successful legal challenge, Ontario will become subject to the federal carbon pricing backstop (aka the carbon tax) beginning in 2019.

How the federal revenues are recycled will determine the net impact of the federal plan on Ontario households, which can be shown in this graphic in the FAO’s report: 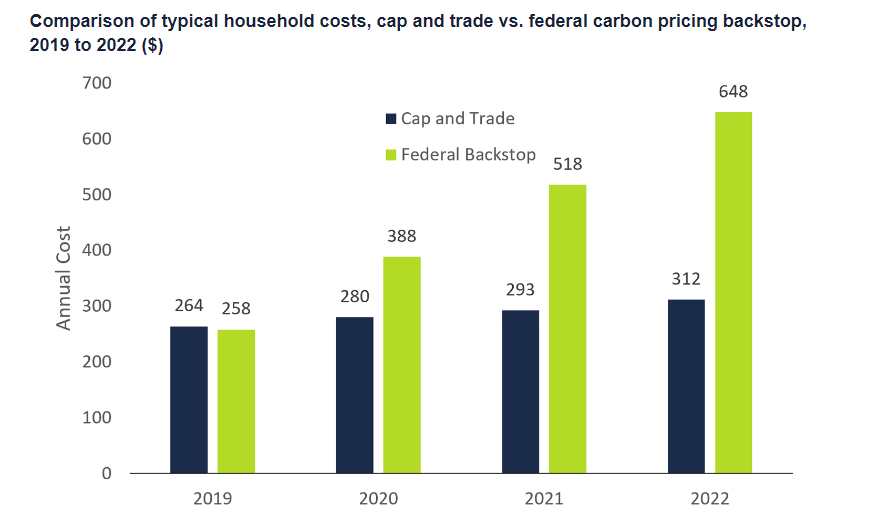 However, should the federal carbon tax system follow through on rebating money back to taxpayers, the FAO estimated some 80 per cent of households in Ontario would get their money back.

You can read the entire report from the FAO here.

Naturally, this didn’t sit well with the Ontario NDP, who put out this scathing press release in response to the FAO report.

“The direct result of Ford’s favour to big polluters will be $3 billion in costs piled onto the backs of the people of Ontario. That means ripping $3 billion right out of folks’ bank accounts, or cutting $3 billion from things like health care.”

“By choosing a federal carbon tax instead of an Ontario cap and trade deal, Ford is forcing Ontario households to pay more. Ford’s plan to have no plan fails Ontario three times over - with higher deficits, higher costs to every household in the province, and damage to our environment today, and for our children and grandchildren,” Tabuns continued.

Some four months into their mandate, the PC government does not seem to have a clear, concise plan that they have articulated to the people with regards to addressing climate change.

Now it seems, their actions will end up costing Ontario taxpayers more money than they realized.