FOR SALE: Site of Hickory Drive Explosion in Mississauga 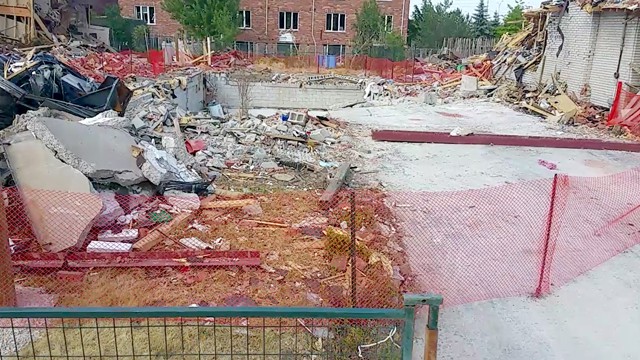 Well, here’s some strange news to start the weekend.

According to MLS, the site of the recent — and at this point, somewhat mysterious — Hickory Drive explosion appears to be up for sale.

While a house no longer exists, you can purchase the land where 4201 Hickory Drive once stood for the relatively fair price of $675,000. It’s certainly not a bottom dollar rate, but in an area where a home surely could have netted close to $1 million (or maybe even a little more), it’s not terribly pricey (although building a whole new house on it would most certainly add to the modest price tag).

The remarks on the listing state, “Vacant Land For Sale At One Of The Best Location In Mississauga. Good Size Lot With 150′ Depth. Buye R And His Agent To Verify All The Details, Taxes And Any Measurements. The Seller And Listing Agent Makes No Rep And Warranties. Please Make Sure To Put The Offer On Attached Agreement Of Purchase & Sale.

Extras:Vacant Land For Sale At One Of The Best Location In Mississauga . Good Size Lot With 150′ Deep .

Brkage Remks:Buyer & His Agent To Verify All Taxes,Measurements & Any Rental Equipment & Fees .Seller Will Not Respond To Offers Before 09/08 ,Allow 72 Hrs Irrevocable. Seller Standard Schedules To Accompany All Offers. Plz Do Not Walk On The Property Without Permission.”

It appears that the home is being sold by National Holdings Ltd. and was listed by Save Max Real Estate Inc. somewhat recently.

The explosion has dominated the news cycle in and around the GTA for some time, mostly because its cause has yet to be officially determined (the Ontario Fire Marshal’s report, which has yet to be released, should shed some light on what, exactly, caused the massive blast).

Although the explosion only took the lives of the homeowners, it affected the entire community and destroyed surrounding homes. While many people have been able to return home, a few are still displaced. Back in August, Mississauga Fire Chief Tim Beckett told Newstalk 1010 that 37 addresses still cannot be occupied for safety reasons.

As of now, three buildings (including the home that exploded) have been demolished and one more may have to be destroyed.

Homeowners Robert Nadler and Diane Page were both killed in the explosion and questions remain as to whether or not the blast was set intentionally. Police recovered strange notes outside the blast site and Nadler’s brother, Frank Nadler, told the Toronto Star that he “couldn’t shake the speculation that the explosion was the result of his brother trying to commit suicide.”

Frank Nadler told The Star that his brother, who was convicted of murder in 1982, had financial issues, severe social anxiety and suffered from paranoia.

The grounds might not be terribly expensive, but they’ve certainly been through a lot. It’ll be interesting to see who — if anyone — purchases the vacant lot and attempts to re-make a home on it.