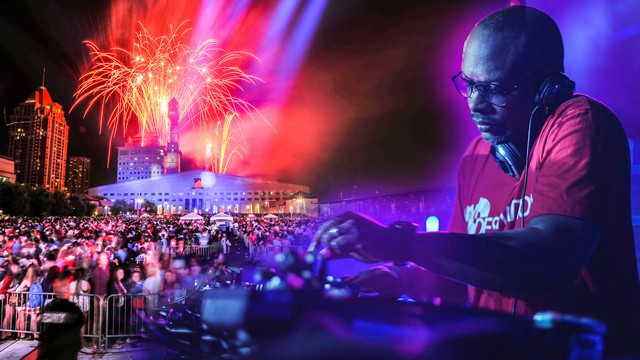 While summer is drawing to a close (boo!), it’s going out with a bang in Mississauga.

The biggest draw of the third annual SoundBites event is DJ Jazzy Jeff , an artist best known for his time on the insanely popular 90s TV show Fresh Prince of Bel-Air and musical work with Will Smith. The AMA and Grammy-nominated DJ is an internationally recognized DJ and producer who has a DMC Championship under his belt.

“SoundBites is all about incredible music and great food. Having DJ Jazzy Jeff perform brings a ‘Fresh’ vibe to the event.” says Nidhi Khanna, Manager, Mississauga Celebration Square. “Building on the success of De La Soul and July Talk, SoundBites is an event that draws international recording artists to our city and makes a statement about the great cultural scene that’s emerging in Mississauga.”

Celebration Square will also be hosting the long-delayed Canada Day fireworks that they had to cancel on July 1 due to high winds.

The event will start at 5 p.m with DJ DVS on the turntables, so be sure to head over early to grab a sweet spot and select your favourite food trucks.

Join insauga.com’s Khaled Iwamura and Jackie Perez as they host a pre-show from 6:35 to 7:30 pm. The one-hour show will feature an interview with James Cunningham (who will be hosting the AwesTRUCK Food Truck Awards) and a DJ battle between DJ D-Smooth and DJ Intrinity, featuring violinists from the Mississauga Symphony Youth Orchestra.

Actually, the Mississauga Symphony Youth Orchestra — comprised of incredibly talented musicians who are sometimes as young as 8-years-old — is very interesting and you should learn more about it here.

At 6 p.m., the AWEStruck Awards will commence when Cunningham presents the Best Concept award. At 7:30 p.m., trucks will be given awards for Best Graphics and Best Menu Item. At 9:45, some lucky trucks will win the Best New Truck and People’s Choice awards.

As for food trucks, participating mobile restos include:

The event will also feature hip-hop karaoke from 7:45 to 9:45 p.m. DJ Jazzy Jeff will start spinning at 10 p.m. and the much-anticipated fireworks will kick off at 11 p.m.

We hope to see you there!