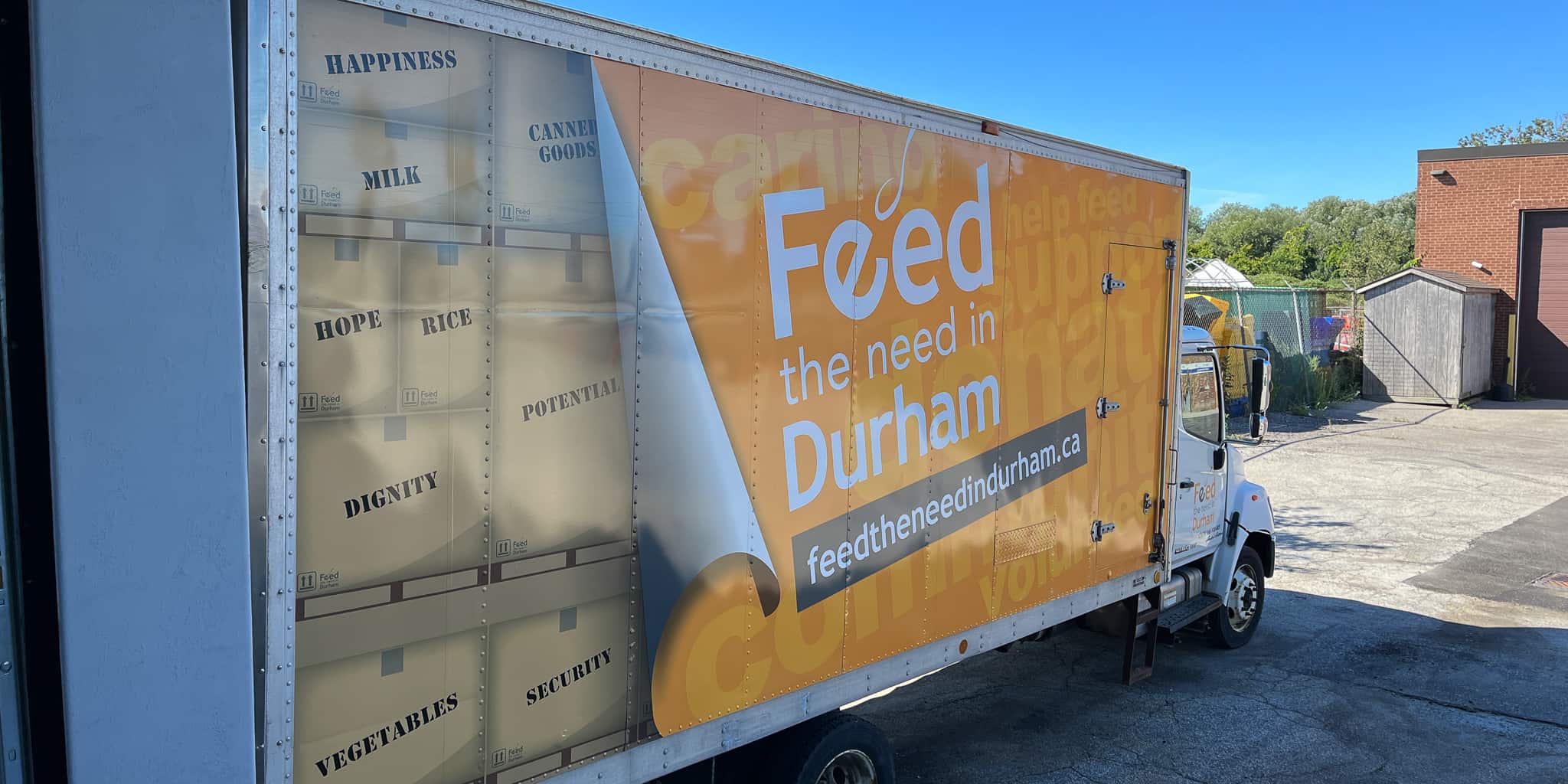 Feed the Need in Durham loads donations at a warehouse. - via the Town of Whitby

Oshawa-based Feed the Need in Durham, the community’s Regional Distribution Hub for emergency food providers, has released a new Hunger Report that shows a 42 per cent jump in food bank use since 2019 across the province.

The report comes from Feed Ontario, shows that 600,000 Ontarians accessed food banks over the last year, a 15 per cent jump from 2019. Those people using food banks visited them 4.2 million times, which represents the 42 per cent usage increase.

Feed the Need in Durham noted that this is the sixth straight year to see increases in food bank use. They recognized that inflation, which reached record highs over the pandemic before falling in recent months, was a substantial factor in the food bank jump.

However, they also stressed that the issues have been present long before the pandemic and “points to decades of insufficient investments in quality jobs, the provincial social safety net, and affordable housing as the primary drivers of this growth.”

“As the regional emergency food hub for Durham, we are continuing to see a rise in the use and need for food security programs across our networks,” said Feed the Need in Durham CEO Ben Earle.

Earle reports there has been a 58 percent jump in visits to food banks in Durham Region specifically, resulting in 23,660 unique visitors across 134,000 total visits. A quarter of these visits were people using the food bank for the first time, a 14 percent increase since 2019.

Nearly 40 per cent of visitors to Durham food banks were youth under 18 who lived in food insecure homes. Most of those kids, roughly 40 per cent, were between six and 11 years old. Nearly 900 visitors were college and university students.

More than 60 per cent of visitors cited the rising costs of food. The average grocery bill has grown more than eight per cent over the last year as grocery store profits swelled to a five-year high.

Another 20 per cent of credited the rise of housing cost and utilities as a major reason behind their visits. Average rents have risen 12 per cent over the last year to more than $1,700 for a one bedroom apartment in Oshawa. The average rent Durham-wide is currently $1,777 for a one bedroom. It is highest in Whitby at $2,100 and lowest in Clarington at $1,475.

While the average cost of a house has fallen from it’s February peak of $1.07 million, the current average of $781,000 remains out of reach for many.

As rents reached record highs over the last year, Feed the Need reported that 65 per cent of their visitors were renters compared to 5 per cent homeowners. Of all visitors Feed the Need found 40 per cent were on social assistance or the Ontario Disability Support Payment (ODSP).

“These factors reflect the growing challenges faced by members of our community who pay an increasing proportion of their income on rent and who struggle to make ends meet with meger, and shrinking social assistance and ODSP income,” they said.

The ODSP payment of a single person currently sits at $1,228 per month, more than $500 short of the average rent bill in Durham Region.

While the preceding Liberal government had planned several increases from 2019-2022, the incoming Progressive Conservative killed this plan shortly after their 2018 election. In 2022, following their re-election the returned PCs upped ODSP by 5 per cent, or about $50 a month.

While visits to food banks from people with homes to call their own have risen sharply, the jump is dwarfed by the amount of people without them using emergency meal programs.

The number of visits to emergency meals programs has risen 91 per cent of the last year to nearly 350,000 unique visits. More than 80 per cent of these visitors were either homeless or under housed.

Anyone who wishes to donate to Feed the Need in Durham can do so online. Anyone in need of food can find the closest food bank online as well.