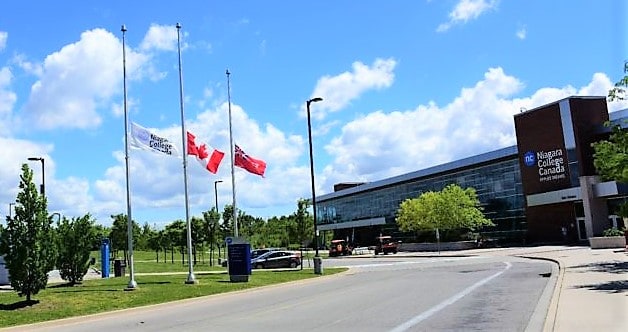 The flags at Niagara College were dropped to half-mast this morning (August 9) to honour former Ontario Premier Bill Davis.

Flags at both the Welland Campus and the Daniel J. Patterson Campus in Niagara-on-the-Lake were lowered in remembrance of not only a prominent political leader but also a “visionary leader who established Ontario’s community college system during his time as the Minister of Education.”

Born on July 30, 1929, Davis served as the 18th Premier of Ontario from 1971 to 1985. Davis was first elected as the MPP for Peel in the 1959 provincial election where he was a backbencher in Premier Leslie Frost’s government.

Under Premier John Robarts, he was Minister of Education. He succeeded Robarts as Premier of Ontario and held the position until resigning in 1985.

In a 2012 edition, the Institute for Research on Public Policy’s magazine, “Policy Options”, named Davis the second-best Canadian premier of the last forty years, beaten only by former Alberta Premier Peter Lougheed, who passed away in 1985.