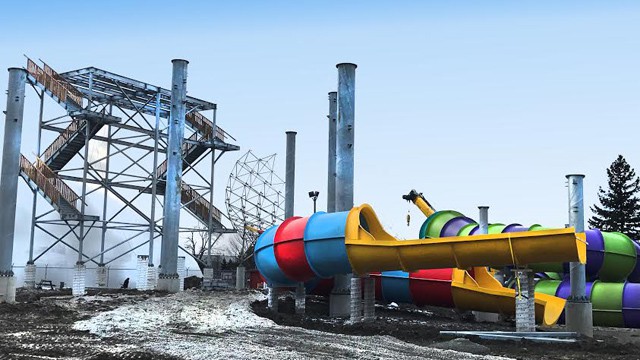 A few weeks ago, we found out that the defunct Wild Water Kingdom was being rebooted under a new


A few weeks ago, we found out that the defunct Wild Water Kingdom was being rebooted under a new name. Now, it’s time to start booking those weekends off — a family raft ride and a huge treehouse are among the new attractions as Wet’n’Wild opens its first Canadian waterpark in Brampton.

“The park will host a variety of thrills for the entire family, including five new major slide attractions, wave pool, lazy river and a large Wet’n’Wild junior play structure for the little ones,” said Wet’n’Wild Toronto spokeswoman Susan Kruizinga.

It’s scheduled to open in May at 7855 Finch Ave. W. under new a new name, ownership, and management, after Brampton’s iconic water park, Wild Water Kingdom (which opened in 1986) suddenly closed for the 2015 season.

Then there are the longest and tallest drop slides in Canada (and the world).

“The park will also offer opportunities for a more relaxed and personal experience with private cabanas and wait staff,” said Kruizinga.

With $25 million dollars in upgrades and renovations, the park sits on a 100-acre lot next to the Clairville Reservoir, Clairville Conservation Area and the Humber River.

It’s operated by Premier Parks, which runs sites across the U.S. in cities such as Hawaii, Palm Springs, Phoenix and Houston.