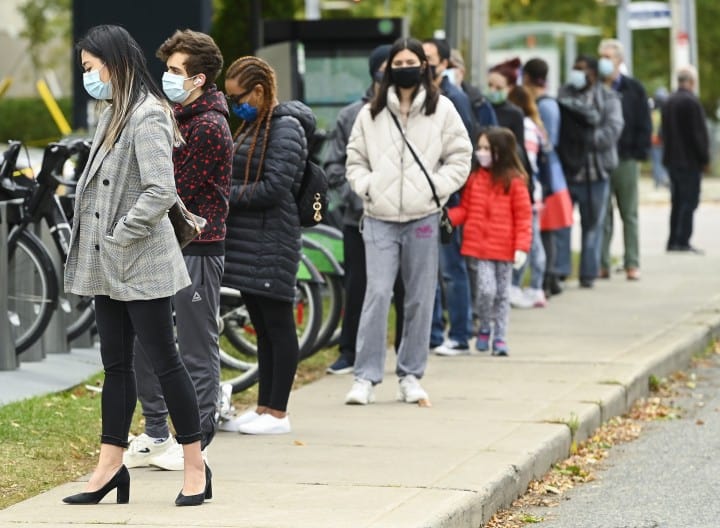 OTTAWA — In light of the COVID-19 pandemic, The Canadian Press interviewed a group of leading Canadian experts in disease control and epidemiology and asked them what should be done to reduce the harms the next time a germ with similar destructive potential emerges. Here are the five most important lessons they offered.

Socio-economic and health inequities have made some people more vulnerable

COVID-19 has exposed fault lines in the Canadian society by showing how long-standing inequities contributed to higher rates of infections and mortality, said Steffanie Strathdee, a Toronto-born epidemiologist at the University of California in San Diego.

“The people who are, by and large, getting COVID are people who are poor, or of-colour, or living in poor socio-economic conditions,” Strathdee said.

Strathdee said people in many areas in Canada have limited health services.

“In my sister and mother’s region of Stouffville (a suburb of Toronto), it’s very, very difficult to get a doctor,” she said.

“What we need to do is invest in our public health and health care infrastructure, because this isn’t going to be the last pandemic we see.”

University of British Columbia professor Erica Frank, a doctor and population-health expert, said almost all those who have died because of COVID-19 had pre-existing risk factors, including age.

“Not paying enough attention to reduction of chronic-disease risk has greatly increased the cohort of susceptible people to COVID,” she said.

She said there is a need to spend money on public health systems and on social determinants of health, such as housing, to decrease sickness and death.

The disconnect between federal and provincial or territorial actions to fight the pandemic is getting in the way of an effective response, said Donald Sheppard. He’s the chair of the department of microbiology and immunology in the faculty of medicine at McGill University and a member of Canada’s COVID-19 therapeutics task force.

For instance, Sheppard said, after Eli Lilly’s COVID-19 antibody treatment was approved by Health Canada, bought by the federal government and greenlit by the federal therapeutics task force, British Columbia health authorities decided to reject the federal approval of the medication.

He said there many more examples, including the handling of long-term care homes.

“Quebec is screaming they want money but they’re refusing to sign on to the minimum standards of long-term care,” he said.

He said there have been poor communication and a lot of territorialism since the beginning of the pandemic.

“There should be a time when it’s all hands on deck and we don’t play games,” he said. “That didn’t happen. We saw these fragmentations between the provinces and the feds leading to, frankly, people dying.”

Sheppard said the Canadian health care system can’t be nimble because federal and provincial governments have seized control of decisions on how to handle the pandemic.

“During a new disease like a pandemic, when we’re learning about things, the people on the ground actually are learning a lot faster than the people sitting in Ottawa, Quebec City or Toronto,” he said.

He said Canadian businesses and universities have been struggling to get approval for testing strategies that use rapid tests to reopen safely.

“The way that the ministries of health are set up, they actually make it incredibly difficult to set those type of things up, because they hold on to all the power with a stranglehold.”

“The dogma from the ministries of health are simple: What we’re doing is right. There is no other better way to do anything … therefore we will not help anybody do anything different than what we’re doing. And anything other than that is a threat to our authority,” he said. “That’s the mentality, and it’s just killed innovation in the health-care setting.”

The COVID-19 pandemic has shown how crucial research is to inform health decisions, said François Lamontagne, a clinician-scientist at the University of Sherbrooke.

He said Canadian scientists have played prominent roles scientifically during the pandemic but recruiting patients to participate in clinical trials has been a challenge due to lack of coordination.

“There have been a lot of studies launched. A lot of those studies overlapped,” he said.

He said having too many studies at the same time has resulted in shortages of suitable patients who are willing to be subjects in clinical trials.

“This, essentially, dilutes all of the studies and you end up enrolling very few people in too many studies.”

Lamontagne said the United Kingdom has been the locomotive of the world in enrolling patients in clinical trials because research is an integral part of the country’s national health system.

“It’s not something that happens in a silo. It’s part of the (National Health Service),” he said. “This led them to build the infrastructure … And then there’s an effort to co-ordinate and prioritize studies so they do one study and they do it well and they get the answers very quickly.”

He said creating better research infrastructure and coordination should be a priority for Canada.

“This is a criticism directed at me as well. I am part of ‘us’ — researchers. We have to get our act together and there has to be an effort of coordination.”

Lamontagne said health research in Canada is largely funded by the federal government whereas health care is a provincial jurisdiction and both levels need to co-operate.

“The stakes are so important for not only how we respond to pandemics now and in the future, but also for the sustainability of a public health-care system,” he said.

Strathdee said good science communication with the public is important to address misinformation regarding the novel coronaviruses and its vaccines.

“We need for people to understand that science and medicine don’t have all the answers all the time, that we’re learning just like everybody else,” she said.

Strathdee said guidelines will be updated as more data become available and that’s what happened when more data showed that face masks reduced the risk of COVID-19 transmission.

She said government officials should be trained in health literacy.

“We got to figure out how to improve communication and improve confidence,” he said.

Strathdee said it’s critical for politicians and public health officials to be honest with the public by “making people aware that, you know, it could get worse before it gets better, and that they need to stay the course.”

She also said people need to understand that if segments of the population are left behind in vaccination, like prisoners and homeless people, that will put everyone at risk.

She said Canada did a good job in detecting COVID-19 cases because it was hit hard by SARS.

“We have to make sure that we don’t unlearn those lessons going forward and that we build upon what we’ve learned from COVID and prepare for the next pandemic.”