There were some recent revelations regarding the status of the land currently occupied by Wally's Restaurant, at the intersection of Hurontario and Central Parkway. As insauga recently documented, the land is slated to be replaced by a 40 storey condominium building, complete with a five-storey podium and ground level retail commercial space. There's been no word since we last checked that Wally's will continue in some form under the new condominium's commercial space—if at all.

But according to Ward 7 Councillor Nando Iannicca, the next step was to hold an informal public meeting to allow the planners representing the developers to present their proposal. In the future, there will be the statutory public meeting before City Council. Iannicca said this upcoming meeting will be held during the Oct. 30 Planning and Development Committee (PDC) meeting.

However, attending the informal meeting in the committee room adjacent to council chambers this past week, sometimes you wonder why they bother going through the motions.

Iannicca got up before the planners made their presentation to say he was against this project for a number of reasons, the primary one being that the building being proposed is too large to be crammed into this specific site, amongst other reasons. But because it is standard procedure, the councillor let the planners present their proposal to residents anyway (all the while saying he's opposed). Iannicca also explained that the planners also have the right to the Ontario Municipal Board (OMB) appeals process should council turn it down.

One of the planners who works for the City of Mississauga, when I asked how the new changes to the OMB would affect that appeal, said that those changes will not be in effect if/when the planners choose to appeal. The changes that were announced only applied to the City of Toronto and Committee of Adjustment variances.

As for the planners' presentation, the following were pictures of that drawings they presented. This is the preliminary drawing of the building being proposed. 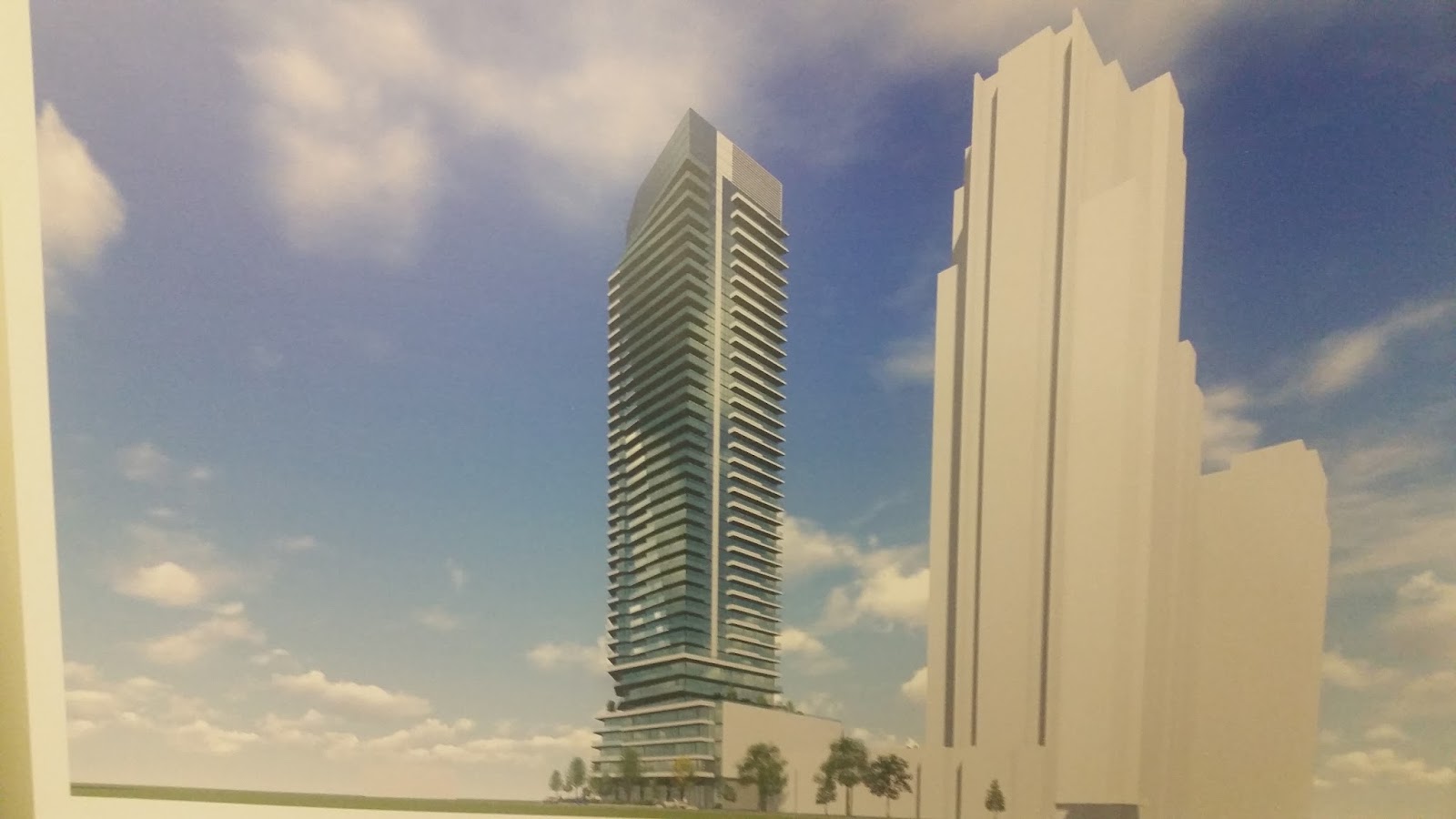 The below picture shows the building in proportion to the intersection of Hurontario and Central Parkway, facing northbound heading towards Square One. 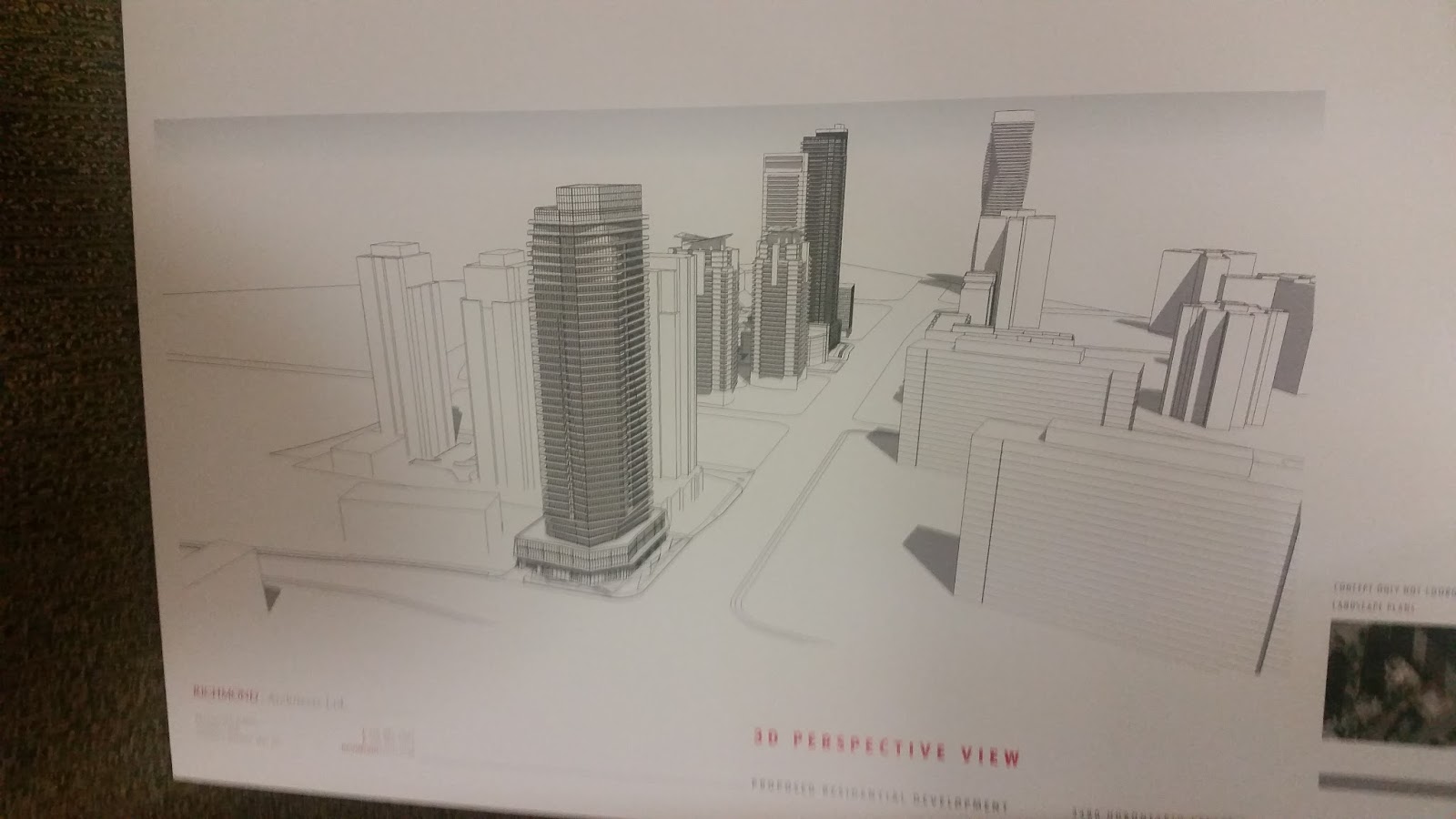 These artistic renderings might disappoint those who wished to get a better sense of how this will affect the surrounding area. So here is a photograph of the actual proposed location. The two buildings in the foreground are the two white buildings on either side of the building in the above drawing. The new proposed condo will be in the foreground between the two existing structures.

The below drawing is a comparison of the height of the proposed building with existing buildings along the north of Hurontario towards Burnhamthorpe. It won't be the tallest one, but it's going to be one of the taller designs. 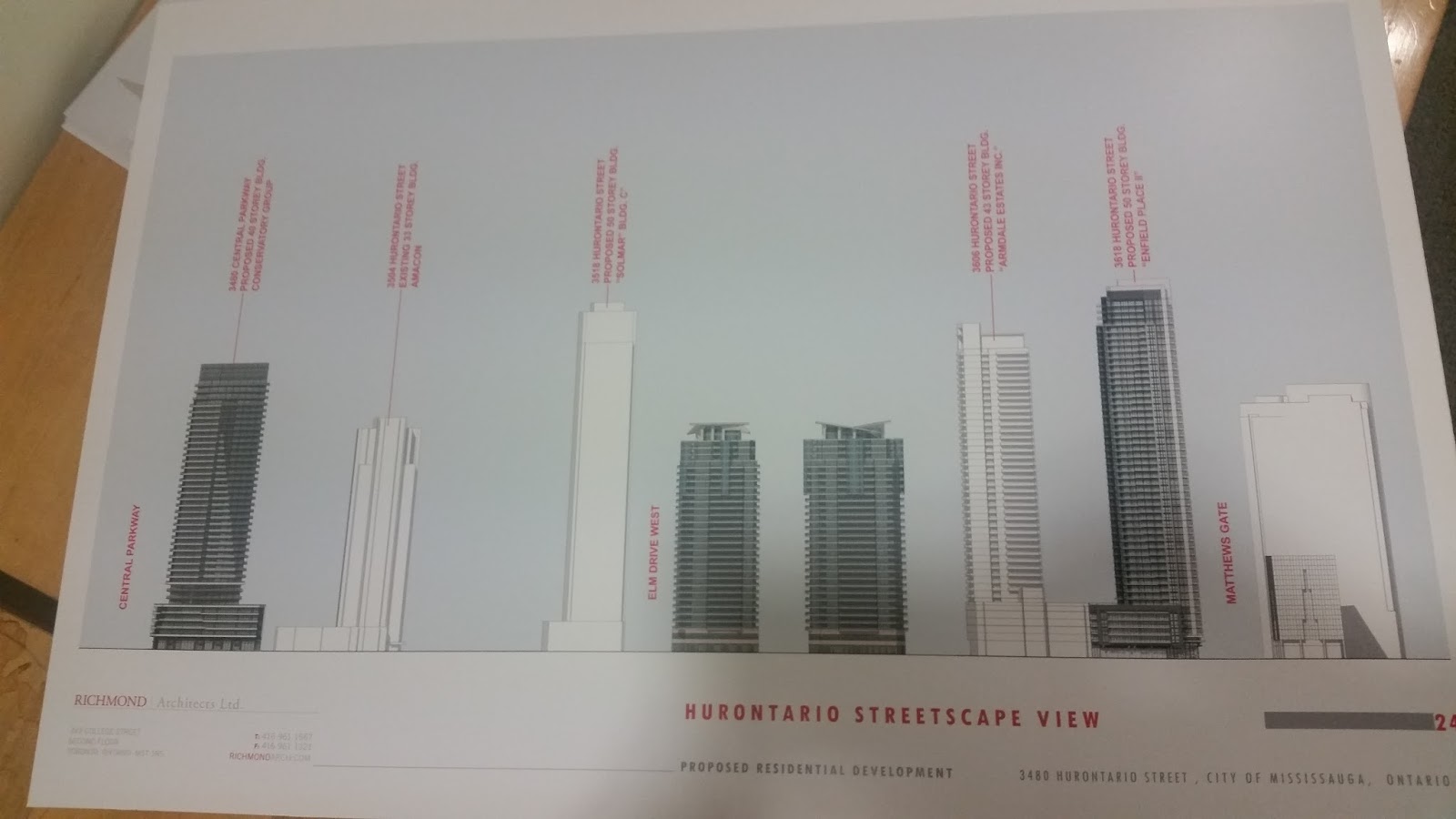 Below is the proposed site plan. 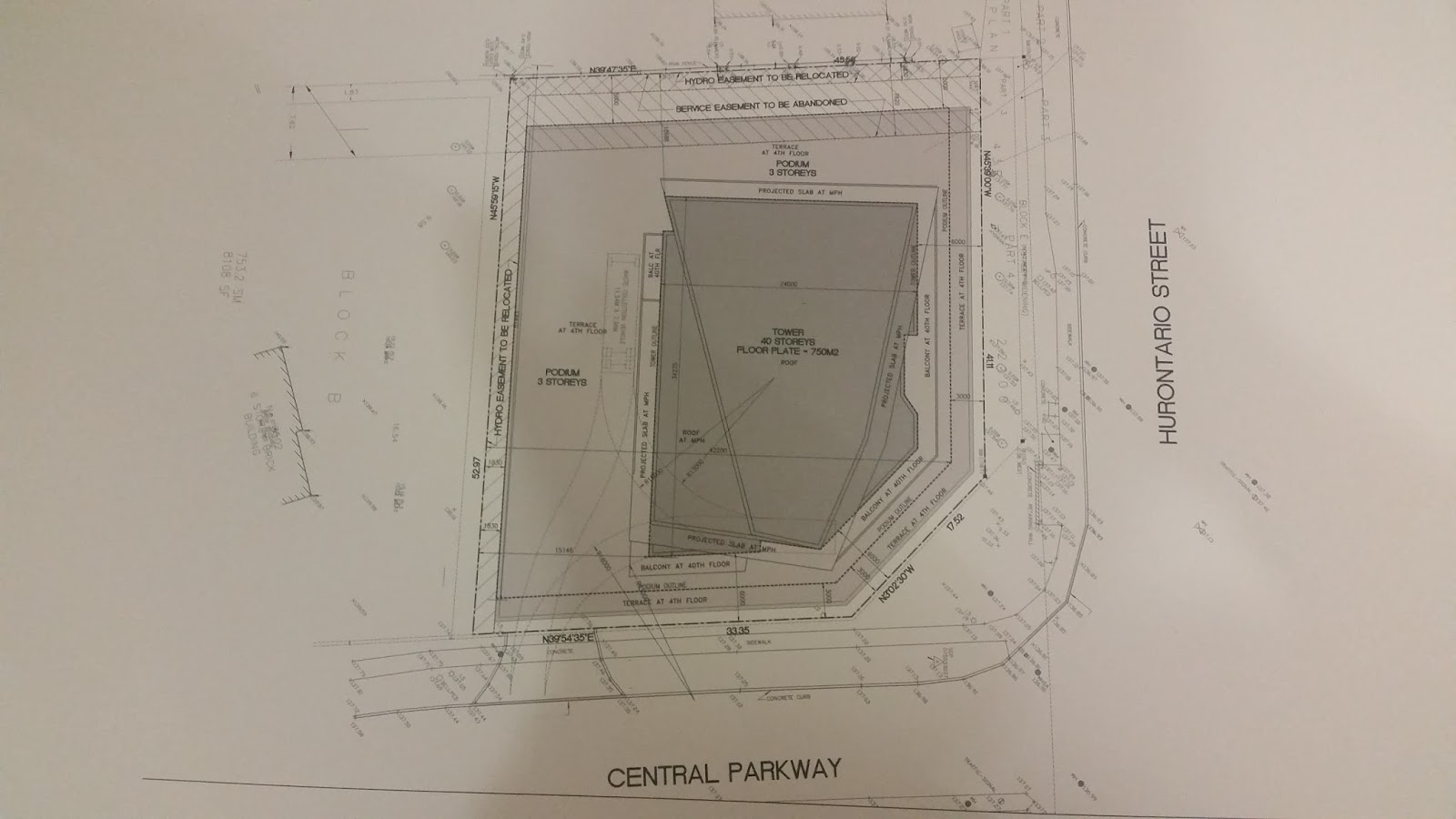 Here is the proposed ground level. Commercial retail space facing the streets with the lobby (in yellow) between them. 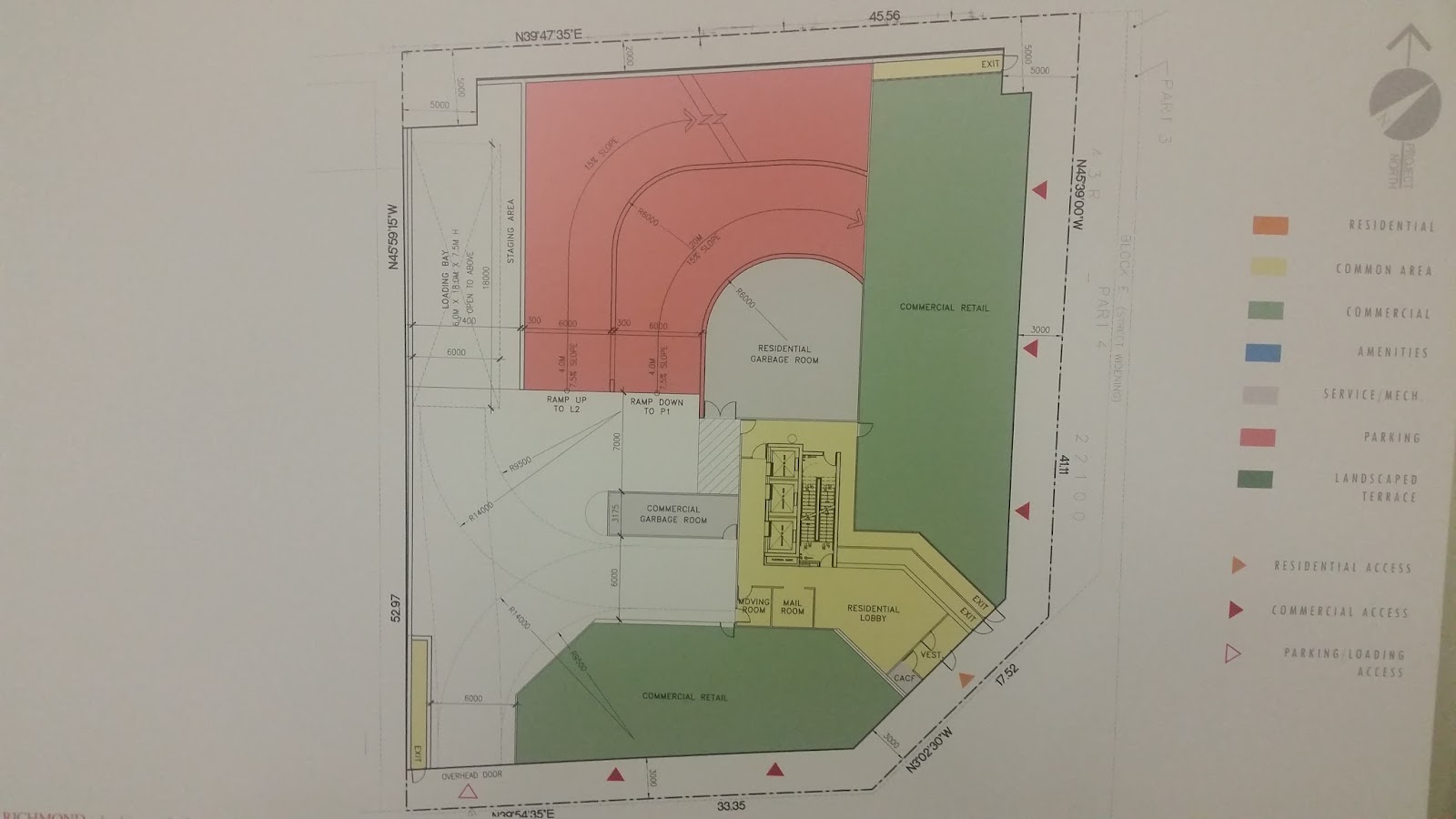 And the proposed rooftop terrace... 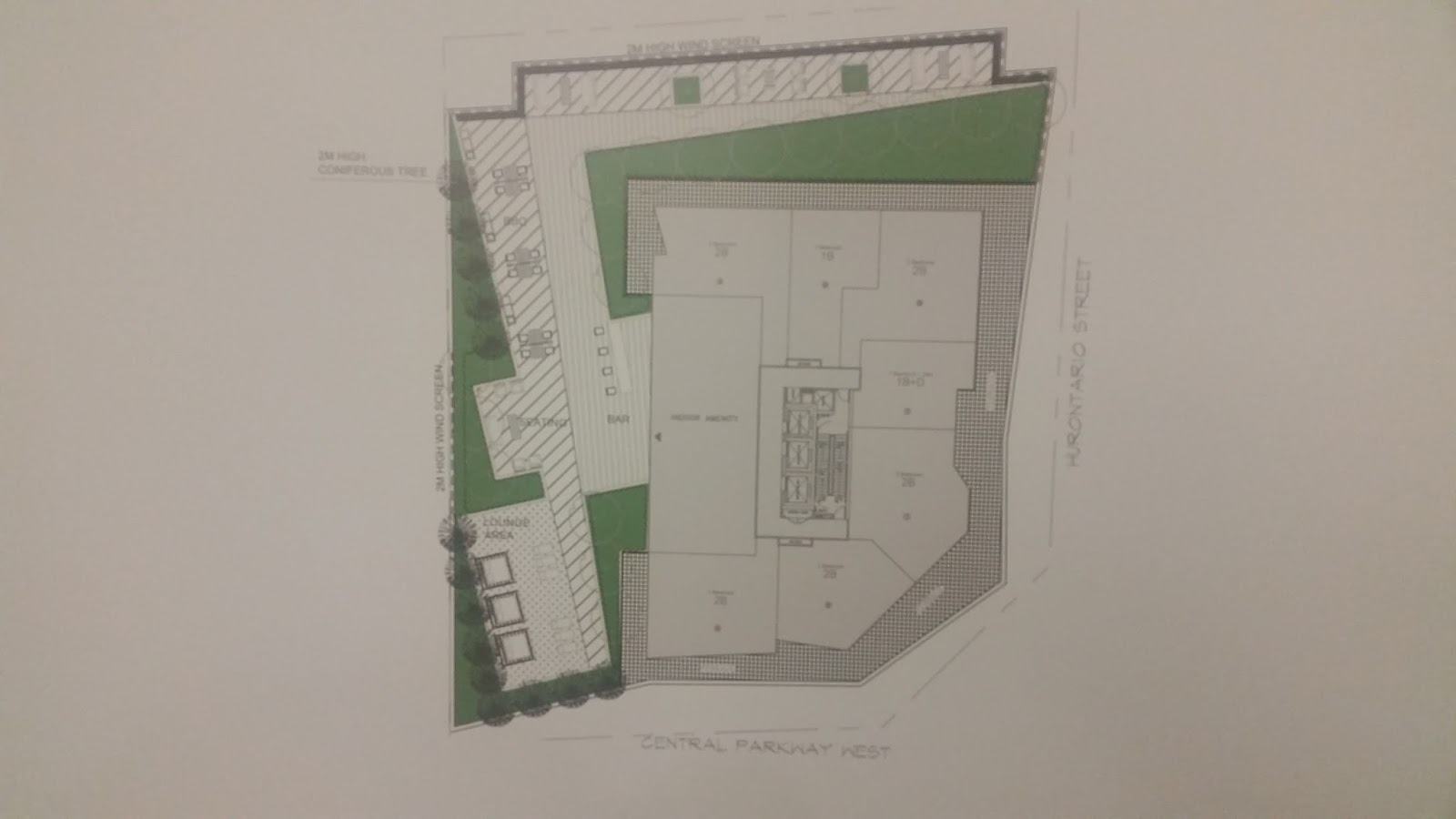 Here are some of my observations from this informal public meeting:

One of the telling points that the planner for the developers said that, from his experience doing similar developments in downtown Toronto, the Wally's site was actually quite a large site by comparison, so he disputed the notion from the councillor that the building is being crammed into a small space. But as it has been said many times before, Toronto is not Mississauga so this observation is rather moot.

The planner also gave the typical boilerplate reasons for selecting this location: it's within the urban growth area of downtown Mississauga (specifically Fairview), it's next to an incoming LRT station and serviced by MiWay transit routes, it's within an evolving area of a high density street and is in keeping with meeting urban design objectives. The planner also mentioned that he sees this as currently being an underutilized site.

There were other questions from residents at the meeting about the setback from the street, shadowing, the space between adjacent buildings and impact to traffic in the area (which the planners didn't have information on yet as a traffic study has yet to be done). One woman was concerned about the space between this new building and her own view from her window. The City of Mississauga's own guidelines for separation between condos as 30 metres; this proposal will allow 50 metres, but the woman said that was nothing and her privacy will be gone.

The Councillor also reassured the residents that any proposed development, not just this one, has to meet certain basic criteria in terms of services, such as accessibility by emergency fire, ambulances and police services, water and sewer infrastructure as well as conservation authority guidelines. It was mentioned that this land actually sits on solid bedrock, so it was a good foundation for condominiums, judging from the existing condos already in the area.

The final observations that I noticed were that, yes the landowner has every right to do what he sees fit on this land, and whether he feels the need to consult the neighbours is his prerogative. Overall, people were saying, and I found this passing strange, was that this proposed building was "ugly." Iannicca said he found no physical redeeming features on it, and neither did residents. I don't see (from the drawings, at least) what they meant by ugly; I've seen enough of these condominiums going up in Mississauga and know they follow a similar design of concrete, steel and glass. If their perception of ugliness is that it looks too much the same as what has been coming before, I would categorize that as blandness rather than unattractiveness.

I personally feel that the area needs more commercial office towers rather than more residential condos, as this section of Hurontario is already filled with them. This land is already zoned as commercial at present time; in order to allow a residential condo here council would need to rezone the land. Why not put in something that would incentivize job growth? Perhaps you'd need to have jobs in the first place that would demand such accommodation, but I digress.

While Canada's sixth largest city indeed continues to grow and intensify along corridors such as Hurontario, now that we have reached the end of the built out phase of development, with light rail transit coming in, there will be sacrifices along the way and existing residents who feel some discomfort about the changes.

But if you feel strongly enough about this proposal, Mississauga residents in the area are encouraged to attend the Planning and Development committee meeting in Mississauga council chambers on October 30, at 7:00 p.m.