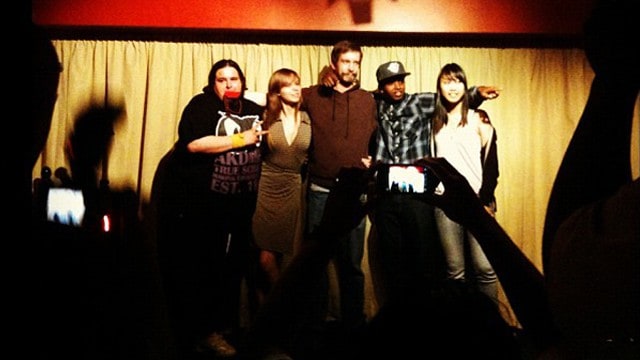 They say the pen is mightier than the sword. In last night’s Mississauga Poetry Slam Finals, however, the pen was the sword, as eight poets dueled it out for a chance to be on the first ever Mississauga Slam Team.

Over the past four months poets from across Mississauga, Burlington, Brampton and Toronto have gathered at Naughty Nadz to battle it out and share their words with eager audiences. In the end 15 poets made their mark by gaining points at the various competitions.

In Tuesday’s finals, eight versifiers returned to the stage to snag one of five spots on the team and a chance to represent Mississauga at the Canadian Festival of Spoken Word, which is Canada’s largest poetry festival for the first time ever.

Beginning in 2004 in Ottawa this event, which was initially dubbed Canadian Spoken Wordlympics, has grown from six teams to 20. The intent of the festival was to provide a national showcase for spoken word talent, but has expanded to include an array of panels, showcases, workshops and other daytime events in addition to the Canadian National Poetry Slam, which occurs in the evenings. Being hosted across the country, this year’s affair takes place in Saskatoon during the month of October.

In addition to competing in this event, the team will compete in the first Ontario provincial slam aptly named SLAMtario this coming July. Later in the year the team will duke it out with teams along the Queen Elizabeth Way at the QEW Slam. This competition will be a treat as half the battle is done in Canada while the other half in the US.

Before making it to these battle royals the eight finalists, which included: Yogi, Knowledge Gonzalez, Ritallin, Ambrosia, Kareem Abdul Jabar, Brent Peers, Elizabeth Chim and co-founder Lip Balm, had to impress the five audience judges and a huge crowd that was on hand.

After two heart pounding rounds the night’s winners were announced. Tying for 4thand 5thposition on the team was Ambrosia and two-time winner Yogi. In third was Brent Peers, while second went to Kareem Abdul Jabar. Rounding out first was Greg ‘Ritallin’ Frankson, who kindly stepped aside as he is already part of a team and because he, “would like to see more of the youth being able to participate.”

Also declining the honour was season point winner Yogi, as his wife is due with their second child during slamming season. His presence will still be felt, however, as he will take on the roll as team coach. He is sure that with their talent and some of his pointers, “this team will do you guys proud.”

“I just want to see them do lots of team pieces, and for everybody find their voice even more and just elevate themselves,” said Yogi.

What is so great about this team is the uniqueness of each member.

“I think we all have really different voices and different writing styles and I think it’s going to be really awesome,” said Ambrosia.

Each member wants to bring different things to the table from energy to depth.

To help achieve that and take the places of the two fallen brethrens that have declined the team are Knowledge Gonzalez and Elizabeth Chim.

As for co-founder Lip Balm a.k.a Matt Miller don’t fret, as he has made Burlington’s Slam Team. He is proud, however, to see his dream of his hometown competing in the Canadian Festival of Spoken Word and to have new people join this unique world.

What a community Miller has created. Despite being competitors for the last four months the Mississauga Slam Team feels like a brotherhood already.

As Peers’ said, “we are all from different places, different walks of life, that kind of thing, but we’ve come together in Mississauga for this community. Put it all together this is a new foundation, new keystone, whatever it is, but it’s something that is going to tie us together that we can build on top of.”

Here is to skyscraper heights for Mississauga and poetry slamming.