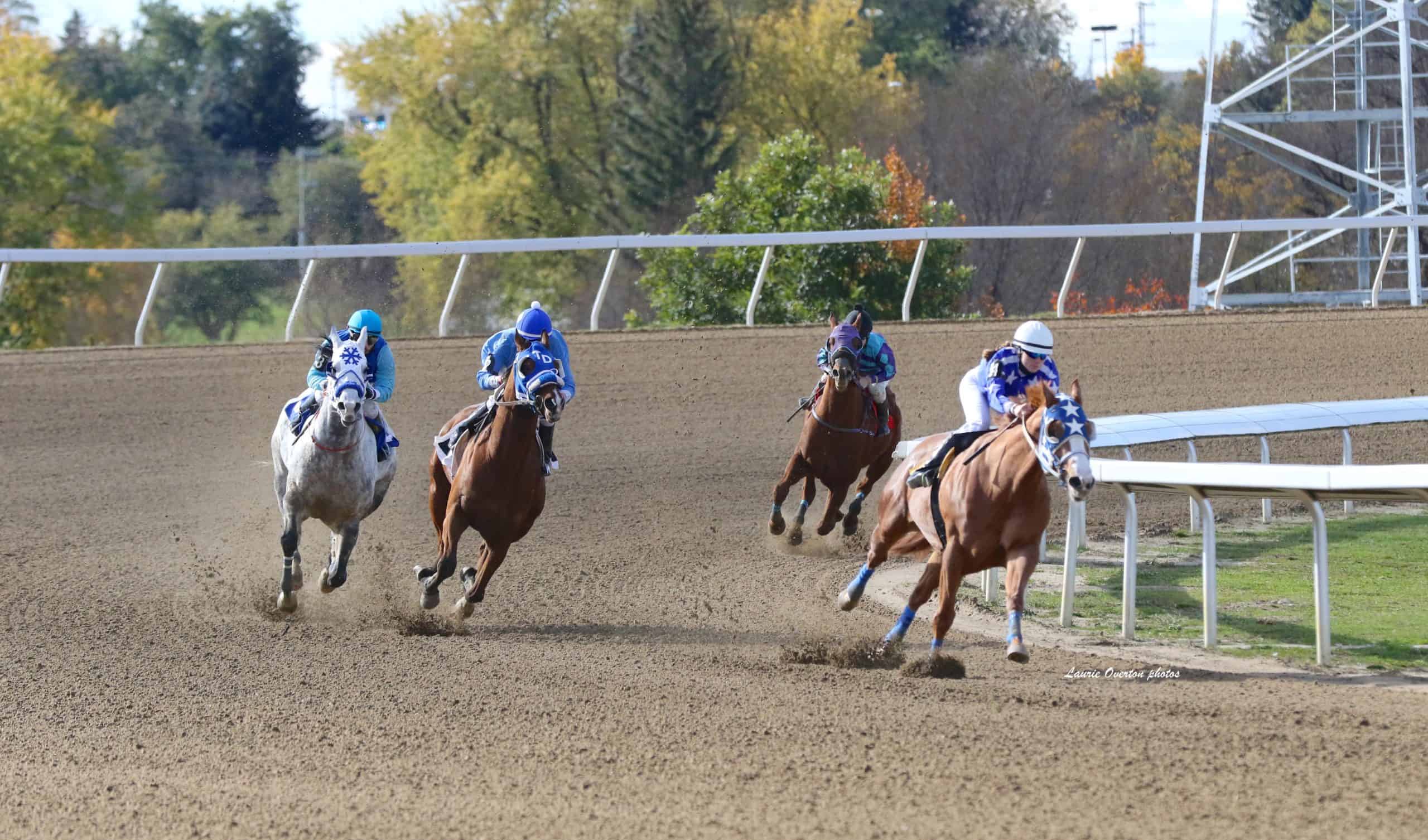 To the hoots and hollers of Ajax Downs spectators and horse people alike, the 5-year-old mare JESS A DEAL and her jockey Cassandra Jeschke raced into the record books by winning the track’s first ever ‘hook’ race, a longer Quarter Horse race around a turn.

Jess a Deal and Jeschke broke sharply from post position three in the 770-yard (about 3 1/2 furlongs), non-wagering event, and chased early leader Jess Carolinas Award briefly before zipping to the lead into the turn and clearing away to win by 2 1/4 lengths in a time of 42.022. Bob Broadstock trains Jess a Deal for Marie Broadstock and Picov Cattle Co.

“You want to still be up there early in the race,’ said Jeschke about getting Jess a Deal out of the gate quickly while still reserving her mount for the longer distance. “I was a little worried because the turn comes up a bit quickly for a big mare like her and we were wide, but she just had so much to give. We were both a little tired at the end.”

Broadstock, who is also president of the Quarter Racing Owners of Ontario, said adding some longer Quarter Horse races to the Ajax Downs program is important for the growth of the sport in Ontario.

“Getting the new (camera) tower built and opening up our races to more than just strictly races on a straightaway has been a goal for several years. I hope it sends a message to everyone out there that we are going to run these races on a regular basis and make it a part of our program. We want to offer more excitement for our fans.”

Ajax Downs enjoyed an increase in wagering from a year ago, despite not being able to open to the public in July. 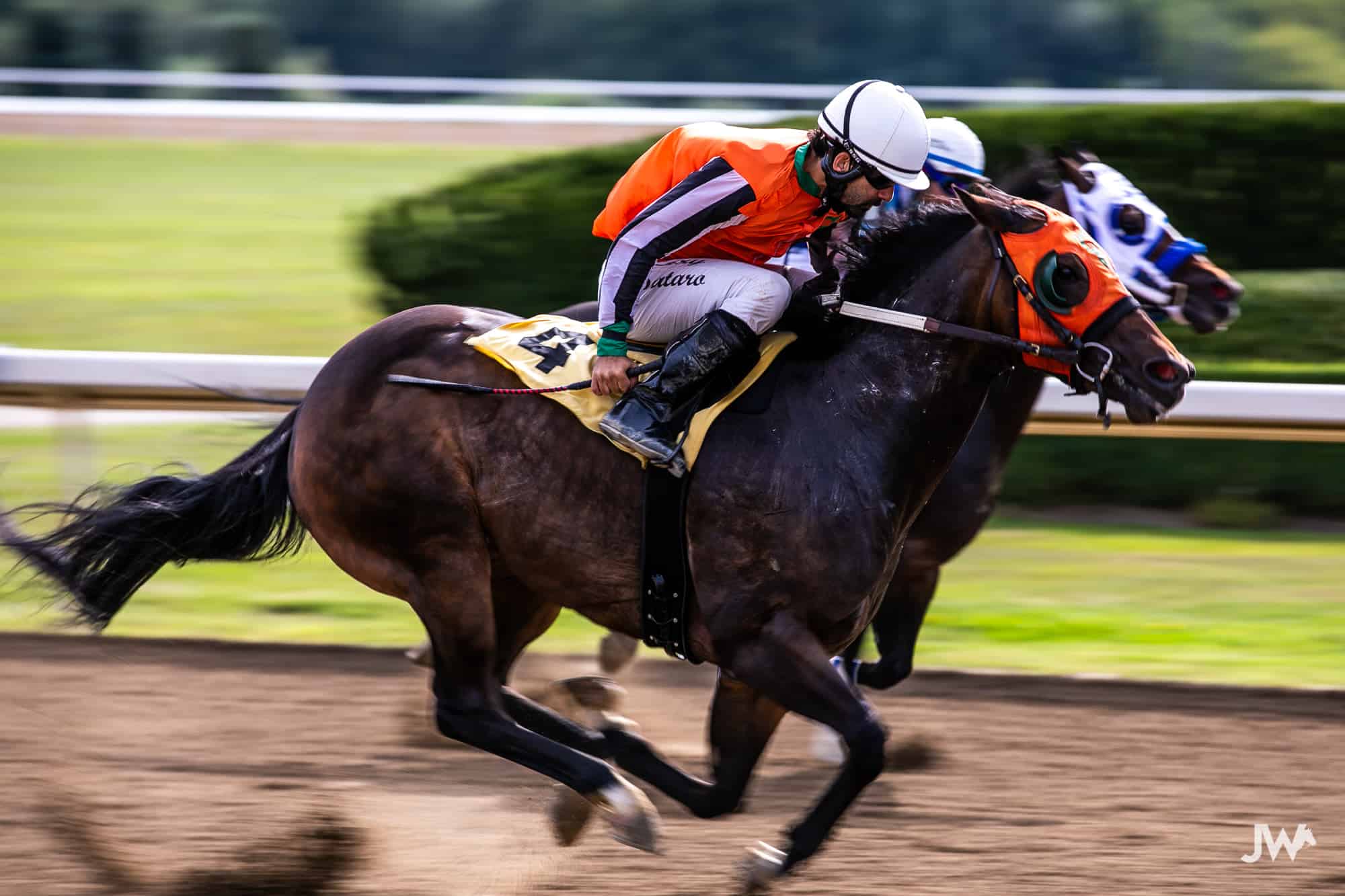 Cory Spataro had a good day Wednesday with a couple of wins to earn his first leading rider title. Spataro finished with 32 wins on the season, highlighted by two four-win afternoons, the Princess Derby on Jessaprimadonna and track-record setting stakes wins on Had to Be Ivory and Jess a Sweet Suprize.

Spataro, who is from Innisfil, has been among the leading riders at Ajax Downs for most of the last decade.

“I felt like I worked hard, persevered and had a whole lot of positivity and confidence,” said Spataro, whose main client in 2021 was owner and trainer Craig Spada, who won a career best 18 races to be second-leading trainer at Ajax Downs. “I also had the support of many people who believed in me.”

Jockey Ismael Mosquiera had his best season at Ajax Downs with 27 wins for second place.

Milena Kwiecien of Burlington won her first owner’s title with 20 wins from stakes stars such as Maryland Magic, Spy for the Senate and Countryfried Chicken while Picov Cattle Company led breeders with 13 winners.

The champion horses and horse people by QROOI racing points including Spataro, Pascoe and Kwiecien, will be honoured at the QROOI awards banquet in Ajax on March 5.

Ajax Downs’ simulcast and off-track betting area will be open throughout the winter. Quarter Horse racing is set to resume in May 2022.