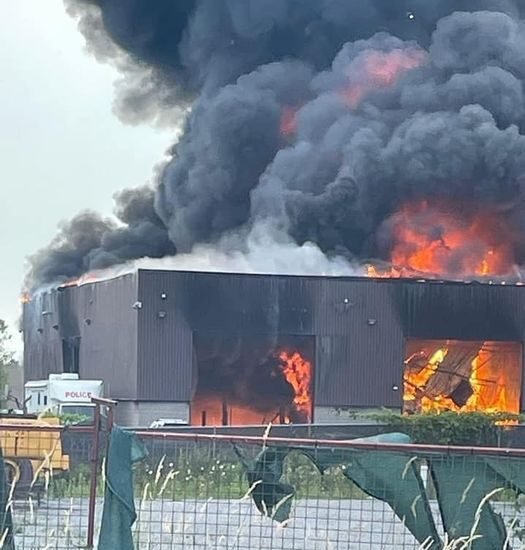 Durham Regional Police have come to the conclusion that the recent fire in their Clarington vehicle lockup was not an act of arson.

Police received the call about a fire in one of their own buildings around 6 p.m. July 18. By the time they and fire crews and arrived the building, a storage centre for evidence vehicles, was completely engulfed.

Hwy 401 was shut down as fire crews worked for hours to contain the inferno. When the blaze was finally out, the entire vehicle bay and all the cars were completely destroyed.

Luckily, no one was trapped inside the building and no one was hurt in the fire.

Later on, police and the Ontario Fire Marshall began an investigation into the origins of the fire. While the Marshall’s investigation is ongoing, police have declared the fire is not considered suspicious.

Work is underway to determine if the remaining structure is safe to enter. Until then the full extent of the damage will remain unknown. However police describe that damage as “extensive.”

Police expect it to take three to four weeks before they’ll be able to get inside the building to assess the damage and recover what they can.

The storage facility housed numerous vehicles needed as evidence in ongoing court cases. DPRS and crown prosecutors are working together in relation to that evidence. Police have not shared how many cases will be impacted by the loss of evidence.

“We want to assure the public that while this has been a challenge to the Service,” DRPS said “it has not impacted our ability to provide policing services to our community.”