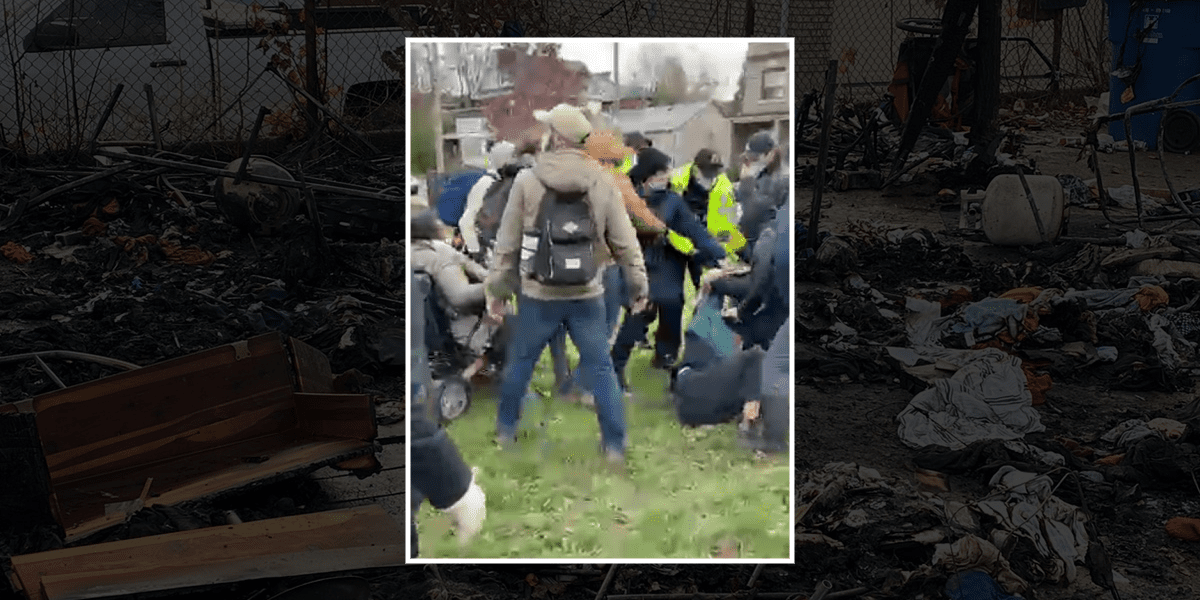 Hamilton police made arrests Wednesday (Nov. 24) after protestors clashed with officers at the site of an encampment at JC Beemer Park. (Photo credit @HamOntESN on Twitter)

Hamilton police made two arrests Wednesday (Nov. 24) after protestors clashed with officers at the site of an encampment at JC Beemer Park.

The series of events began shortly before 6 a.m. when encampment residents were awoken by a fire that led to multiple explosions.

Early in the morning, JC Beamer residents were woken up by a large fire that destroyed most of their possessions and tents. The cause of the fire is still being investigated by Hamilton Fire Department, but residents tell us they don’t know how the fire was started. pic.twitter.com/6BCeerEX1Y

The advocacy organization, Hamilton Encampment Support Network (ESN) tweeted that “most of their possessions and tents” were destroyed.

Encampment residents told the ESN they don’t know how the fire was started at JC Beemer Park, located at the corner of Wilson St and Victoria Ave.

“Residents were not offered permanent housing solutions, and the options that were offered were more than inadequate,” said the ESN in a media release. “The shelter-hotels offered were locations where some residents have restrictions or have experienced past violence, and the crisis center ‘beds’ are an interim stay of five days.”

Two individuals were arrested during the protest; a 33-year-old male was charged with obstruct police and a 27-year-old female for assault police officer.

The ESN called the arrests “violent.”

In the video, posted by ESN, a protestor can be seen charging toward an officer before another individual is dragged by police.

We are defending the JC Beemer Encampment please head down! https://t.co/jdgzXsIDFt

Hamilton Police says it will remain in the area as municipal law enforcement works to clean up the site.

Advocates say they will continue to hold space at the park overnight as encampment residents refuse to leave.