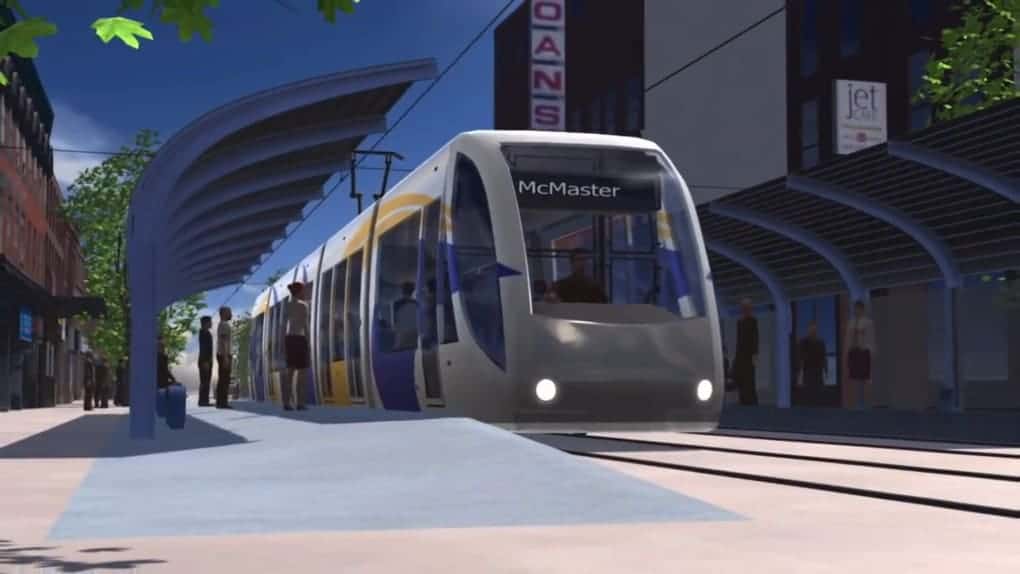 Hamilton’s Light Rail Transit (LRT) project is officially a go with the federal and provincial governments announcing Thursday (May 13) that matching $1.7 billion investments would go towards its construction.

The $3.4 billion LRT line will go from McMaster University, through downtown, to Eastgate Centennial Park in Stoney Creek. It will cover 14-kilometres with 17 stops.

“This historic transit agreement between the federal and provincial governments will have a transformative impact on the Hamilton community,” said David Farrar, President and Vice-Chancellor at McMaster University. “The Hamilton LRT will be critical to helping McMaster University’s students, staff, and faculty move seamlessly throughout the city. This will support local business, fuel regional economic growth, and ensure that our students are able to enjoy everything Hamilton has to offer.”

The long-term transit project, which has been recommended to City Council through multiple independent reports and studies, will not need a new environmental assessment and shovels are expected in the ground by 2023.

“On behalf of the Hamilton business community, I would like to extend tremendous gratitude to Minister Mulroney and the Ford government for collaborating with their federal counterparts to deliver a once-in-a-lifetime transit investment in our city and across our region,” said Keanin Loomis, President & CEO, Hamilton Chamber of Commerce.

“The job creation, economic development, infrastructure, intensification and environmental impacts of this LRT project will greatly accelerate Hamilton’s transformation as we emerge out of the pandemic.”

The funding announcement was made by Caroline Mulroney, Ontario’s Minister of Transportation, and Catherine McKenna, Federal Minister of Infrastructure and Communities.

“From our original $1 billion capital commitment for the project to our strong calls over the past two years for a federal funding commitment, we have remained focused on delivering rapid transit for the people of Hamilton,” said Minister Mulroney.

“Ontario has increased our investment to $1.7 billion to ensure that we can get Hamiltonians a 14-kilometre line that connects Eastgate Square through to McMaster University, and to ensure that we can get shovels in the ground as soon as possible for this critical transit project. The LRT will improve connectivity and create thousands of sustainable jobs for the future.”

Hamilton’s LRT project is part of the “BLAST Network” — a rapid transit strategy conceived as part of the City’s 2007
Transportation Master Plan, and further developed in the 2008 Rapid Transit Feasibility Study and 2011 Rapid Ready report.

The BLAST Network would include:

Former premier Kathleen Wynne had committed $1 billion to Hamilton LRT in 2015 but it was cancelled by Doug Ford’s government four years later.

Earlier this year, the province said it would fund a smaller, nine-kilometre line if the federal government agreed to kick in money.

Under the Investing in Canada Infrastructure Program, the federal government will also contribute 40 per cent of funding to these priority subway projects.