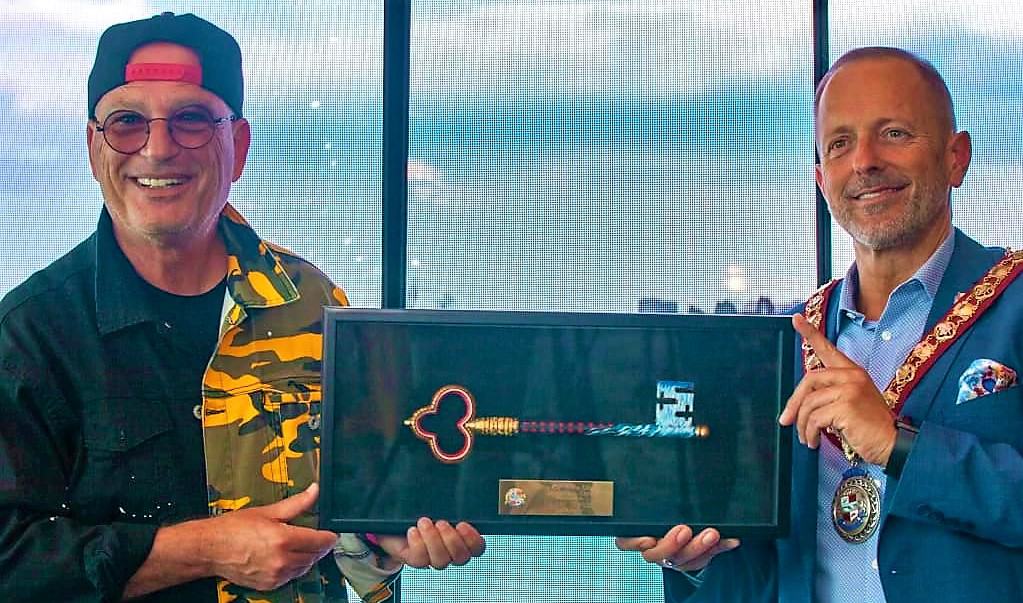 Comedian-TV personality Howie Mandel is presented with his Key to the City of Niagara Falls last night by Mayor Jim Diodati. (Photo: Facebook)

However, he wasn’t there looking for a building permit or anything quite that mundane. Mandel was there to accept the Key to the City of Niagara Falls from Mayor Jim Diodati.

In town as a judge on the TV show “Canada’s Got Talent,” being filmed at the Niagara Falls Convention Centre, Diodati said, “It was my special honour to welcome Howie Mandel home to Ontario to present him with a Key to the City of Niagara Falls this afternoon!”

“We’re thrilled to present this Key to Howie so he will always know that he has friends, fans and supporters in Niagara Falls and is welcome back anytime!”

The ceremony was filled with laughs as the comedian fired off zinger after zinger.

That said, the comedian, born in North York, clearly has a special place for Canada – and more specifically, Niagara Falls – in his heart.

After accepting the key, he said, “All kidding and acting aside, this does mean a lot to me. Canada has always been… and I’ve talked about it in many interviews, I’ve always resented the fact that I had to leave this county to go make a living.”

“I would have loved to have lived here. I’m from this province and my favourite place, just about every weekend, we used to come to Niagara Falls. This was really our fun spot.”

Almost already a favourite in the many Los Angeles comedy clubs in the late 1970s and early 1980s, Mandel rose to prominence when he played the role of the rowdy ER intern Dr. Wayne Fiscus on the TV show, “St. Elsewhere,” which first aired in 1982.

He kept busy with countless performance in movies, TV and stage before exploding in the public realm in 2008 as host of the five-day-a-week syndicated daytime version of the game “Deal or No Deal” which offering up a top prize of $500,000.

Out of all judges on the show, Mandel currently has the longest tenure than any other judge or host, spanning thirteen consecutive seasons (season 5–present).

In October 2021, it was announced that Mandel will be a judge on the second season of “Canada’s Got Talent,” filming in Niagara Falls since the beginning of this year – though there was a brief hiatus when pandemic restrictions cracked down, stalling production.

And as Diodati reminded everyone at the ceremony yesterday, “Don’t forget to tune into the Canada’s Got Talent finale tomorrow, Tuesday, May 17th at 8 pm on City TV.” 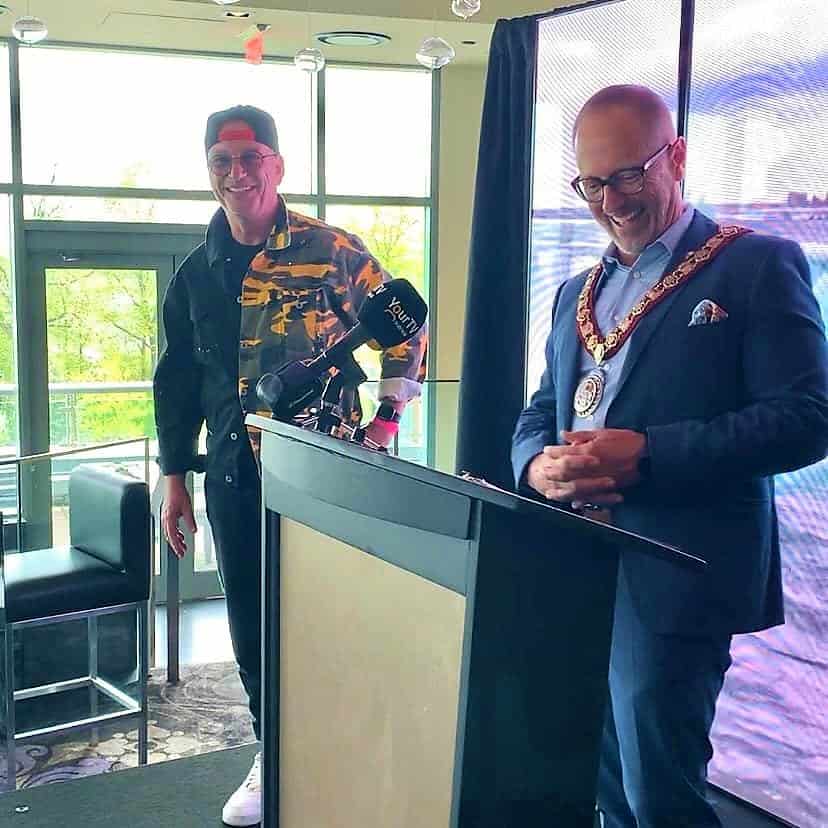 It was a ceremony filled with laughter as Niagara Falls Mayor Jim Diodati presented comedian Howie Mandel with a Key to the City Of Niagara Falls yesterday. (Photo: Facebook) 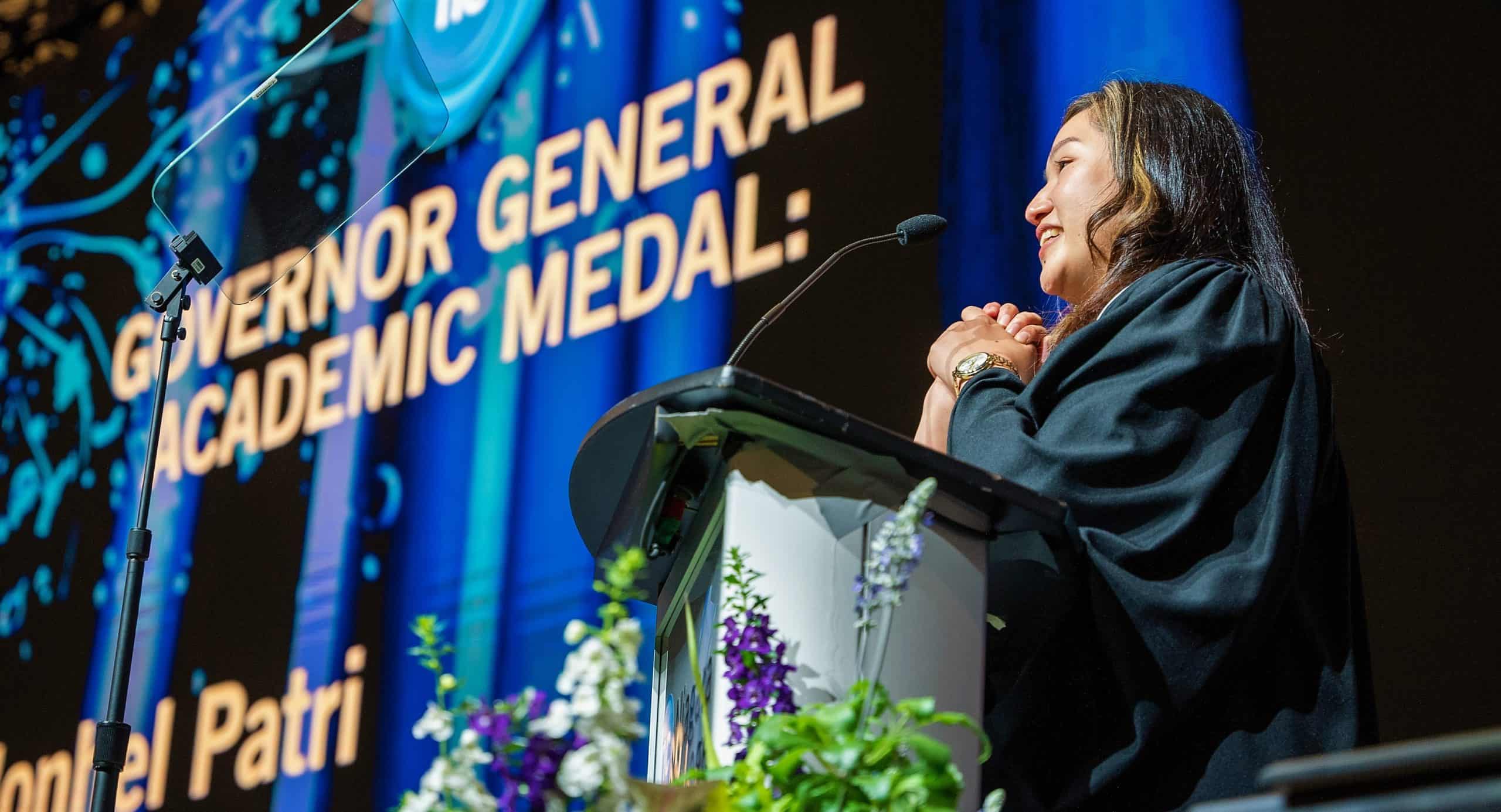