While many people are aware that Mississauga has a rich local arts scene, not everyone is aware of how innovative—not to mention creative—it can truly be.

Anyone who regularly stays in town to enjoy theatre productions (and we know you're out there, because A Christmas Carol sells out every year) should note that the Living Arts Centre (LAC) is about to host a very unusual production.

A production that will take place on a city bus. 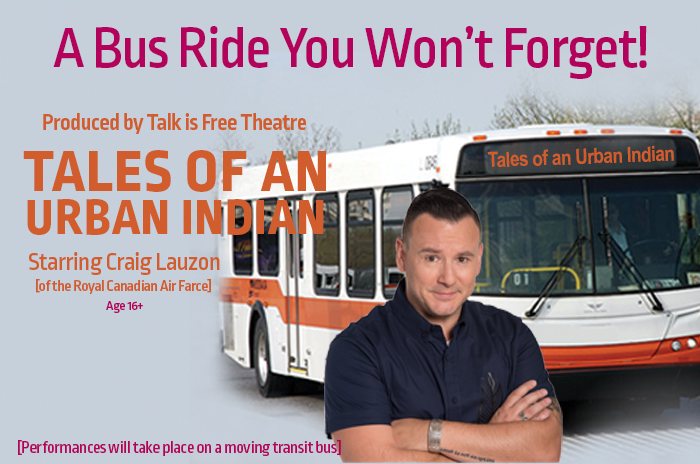 Tales of an Urban Indian, written by Darrell Dennis (Teen Nick/ YTV series Open Heart and the APTN/ HULU series Blackstone) and directed by Herbie Barnes (The Remember, Someday, and Dinky), is offering viewers the opportunity to "hop on for a one-of-a-kind bus ride you won't want to miss."

The production also stars Craig Lauzon, a Canadian actor, writer and comedian of Ojibwa descent who is best known for his work on Royal Canadian Air Farce.

Tales of an Urban Indian, a production created by accomplished First Nations artists, is a semi-autobiographical story of Simon Douglas, a contemporary First Nations man raised on the reserve in British Columbia and the streets of downtown Vancouver.

LAC says the play, described as a dark comedy, unfolds on a City of Mississauga MiWay transit bus as it makes its way in downtown Mississauga, stopping at key points on the journey.

"I wanted to tell a story in which an Indigenous character is not defeated by his victimization, but rather, comes to the realization that all human beings possess the power of choice when reacting to their life experience. It was also important, in dealing with the difficult subject matter...to approach it from a humorous point of view, since humour is perhaps the most important and prevalent survival mechanism in Indigenous society."

What's most interesting about the play, besides the timely subject matter, is the fact that the one-man show literally takes place on a moving MiWay bus.

After viewers are picked up at the Living Arts Centre, they are thrown into what the LAC describes as "a comedic yet touching performance, traveling to locations in Mississauga that tie-in to the story."

The LAC points out that the level of intimacy the audience will experience will be unlike anything else they've experienced during a traditional theatre production.

"While fully scripted, every performance will be played in a different environment. It gets dark at different times and traffic volumes are different so no two experiences will be entirely the same," the LAC says.

After the play, the bus will return to the Living Arts Centre and viewers will be able to participate in a Q & A session with various members of the production.

The production is recommended for viewers 16 and over.