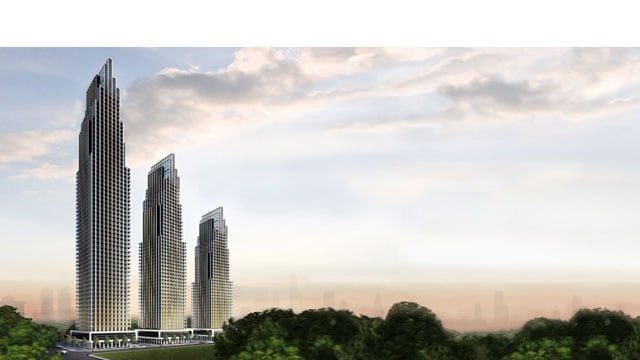 I know, I know — everyone hates condos. To some residents, they’re nothing but gargantuan eyesores that infest the skyline and rob the city of its precious green space.

Earlier this year, Solmar Development Corp. was given the go-ahead to construct its super-sexy Edge Tower Condos and, judging from the artistic rendering (see cover photo above), they’re going to be a tremendously cool addition to Mississauga’s evolving skyline.

Back in June, the city of Mississauga approved a slightly different project than the one the developer initially proposed (see an earlier rendering below). According to this report, the mixed-use condo development is slated to take shape in City Centre (City Centre has been getting a lot of development announcements recently). The towers will sit at 24-64 Elm Drive and 3528-3536 Hurontario. 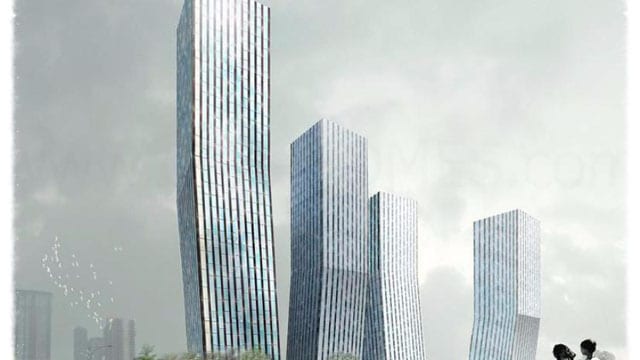 The proposed project consists of three residential buildings that are 35 to 50 storeys in height and a city park. In terms of commercial use, there will be space for retail/commercial businesses and a daycare. There will also be a 0.68 acre park in phase 1.

Initially, Solmar proposed a four-tower development with more residential units. As of June, the project consists of three towers, more ample green space in the form of an urban park and the inclusion of ground floor retail with offices above at the intersection of Elm and Hurontario.

As for when the project will break ground, it’s too early to say. The proposed development is currently before the Ontario Municipal Board, so information on potential starting and completion dates is not available at this time.

So while you might be fatigued of high-rises, the hyper-contemporary condos will, much like the Absolute (Marilyn Monroe) towers, add a little glamour to the skyline and will likely benefit the city as it urbanizes and grows. With the LRT and a host of other projects coming to Mississauga, it’ll be nice to see creatively constructed condos that beautify the landscape and make the city a little more iconic.

Correction: An earlier edition of this article incorrectly stated that there would be four towers and omitted the inclusion of green space. We regret the error.