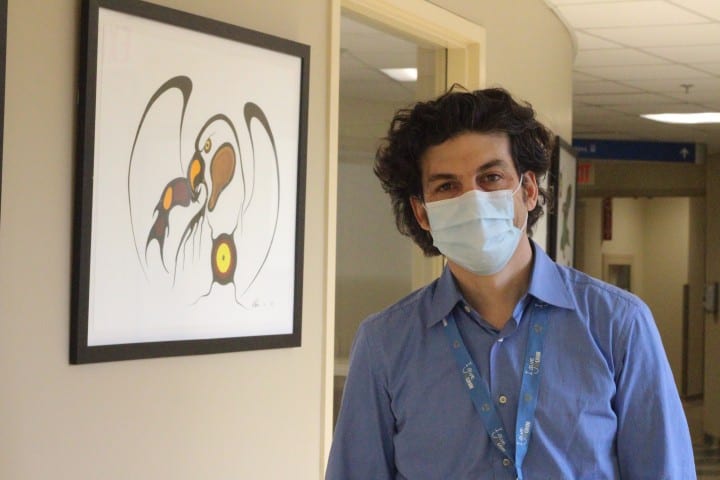 TORONTO — More than a year after COVID-19 emerged, few therapies exist and many that do are expensive, cumbersome and unproven, say experts who suggest disjointed data, funding and communication are derailing efforts to tamp down disease.

The urgency for effective drugs has only become more intense amid Canada’s vaccine deployment debacle and the rise of more infectious variants, adds Feld, whose research into a promising antiviral treatment was recently published in Lancet Respiratory Medicine.

“It would have been nice to have seen a little more co-ordinated effort to try to develop antiviral therapies early on, and that’s probably hampered all of our efforts at developing therapeutics,” says Feld, calling for more national and global co-ordination of clinical studies and data sharing.

Feld’s research centres on a protein that can activate cellular pathways to kill invading viruses. Early data on injecting the drug, called peginterferon-lambda, into COVID patients found it significantly sped recovery for patients enrolled in a small Phase 2 clinical trial.

The 30 participants who received the experimental drug were four times more likely to clear the infection within a week than those in the placebo group.

But all were planned independently when a shared effort could have allowed scientists to collaborate on trial design and divide work based on expertise and local situations, he says. He envisions an approach similar to the Manhattan Project, which was a Second World War-era effort to develop an atomic weapon.

“The fact that we have millions and millions of patients across the world and our clinical trial data is still only coming out with thousands of patients’ experience is an absolute shame,” says Chagla, an associate professor of medicine at McMaster University.

“We should have had more patients enrolled in clinical trials to robustly answer these questions of what therapies worked or didn’t work.”

Dexamethasone, given to hospitalized patients who need help breathing, has been among the most significant therapies to tackle COVID-19 in a field littered with false promises.

Feld points to hydroxychloroquine as the poster child of misguided, politically motivated treatment bids, while more recently, unproven hype has surrounded the anti-parasitic drug Ivermectin. Premature promotion does all scientific research a disservice, he says.

“That probably actually hinders studies from being done, because when people feel like it’s good or bad – and especially if that changes with their political leanings – that may really affect the way you get people enrolling in a trial or not enrolling in a trial,” says Feld.

On top of that, Chagla says it’s been hard to keep some clinicians from giving unproven therapies to suffering patients with no other options.

“That was the issue in the beginning, for sure – people felt uncomfortable having a patient on a ventilator without giving them hydroxychloroquine or giving them some other drug to make it feel like they’re doing something based on a few case reports and a few theories.”

Just last week, the Quebec government cautioned clinicians against embracing colchicine as a COVID-19 therapy after the Montreal Heart Institute touted the common gout medication as “a major scientific discovery.”

Quebec’s National Institute for Excellence in Health and Social Services acknowledged the institute’s study showed positive results, but said the benefit was too small.

While a number of Canadian study sites are part of a World Health Organization trial known as Solidarity, Chagla says data from every Canadian COVID-19 patient should be shared for vital learning along the lines of the U.K.’s national clinical Recovery trial.

“We don’t know other than dexamethasone whether or not these therapies work in significant numbers. Remdesivir maybe, but it’s still even controversial there. Why are we not doing this now, 11 months later? We have the talent, we have the personnel, we have the patients, we have the health-care staff,” says Chagla.

“We should be able to be co-ordinating such that every patient that’s hospitalized for COVID-19 receives a therapy that informs practice for the next patient.”

Health Canada has authorized just two drugs specifically for COVID-19 treatment – Gilead Sciences’ remdesivir and Eli Lilly’s bamlanivimab – and is fast-tracking the review of others.

But while bamlanivimab claims to ease and prevent COVID-19 symptoms among mild-to-moderate cases, there’s limited safety data, it costs US$1,250 per dose and is difficult to administer because it involves an hour-long intravenous infusion which could redirect front-line medical staff.

Dr. Niall Ferguson, head of critical care at the University Health Network and Sinai Health System, sees potential in early data for tocilizumab, approved for use in Canada to treat rheumatoid arthritis.

Although evolving data has been mixed and is still emerging, Ferguson notes the monoclonal antibody is already being used off-label for some severe patients.

“It’s happening on a bit of an ad hoc basis when patients are caught at the right time and look like they may have a bit of additional inflammation going on that could be set aside with this drug,” says Ferguson, who looks after the most severe COVID-19 cases Toronto General Hospital.

Ferguson is also bullish on a global study that suggests blood-thinners can prevent some moderate patients from deteriorating further, expecting to see “widespread use of anticoagulation in just a few weeks” once findings are released.

Therapies have gained ground in the past year, Ferguson insists, crediting lower hospital mortality rates to various lessons learned, including better supportive care, earlier interventions, and the reversal of well-meaning strategies early in the pandemic that actually did more harm than good. That included the overuse of mechanical ventilators and a misguided belief that steroids should be avoided in severe COVID-19 cases, he says.

While the pandemic now includes worrying new variants, Feld says peginterferon-lambda activates multiple antiviral pathways, making it “exceedingly unlikely” for a virus to become resistant to all of them at the same time.

It’s best deployed as early as possible to cut not only the chance of severe illness but possible spread to others, he says, envisioning the day someone might get an injection the moment a point-of-care test revealed COVID-19.

“Vaccines are great for preventing people from getting the infection, but for those who do still get the infection it’s important to have therapeutics to treat them,” he says.