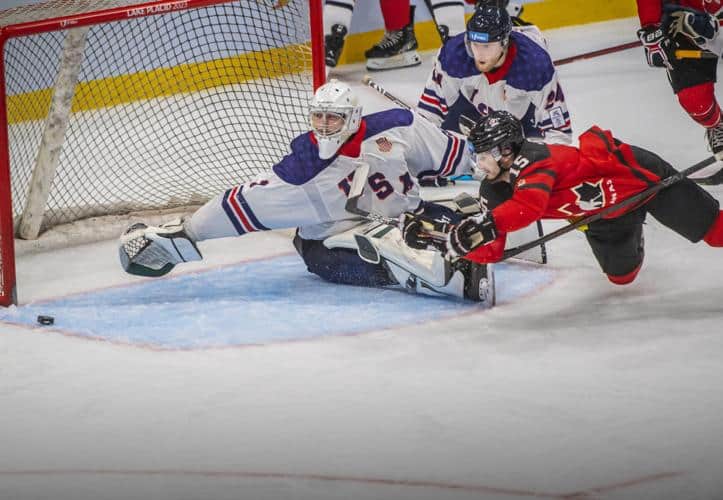 For the first time since 2013 Canada has won gold in men’s hockey at the FISU World University Games. Capping a dominant performance that saw them outscore their opponents 48-8, the Canadians topped rival USA 7-2 Sunday in Lake Placid, New York.

“It’s an amazing feeling. When this group came together two weeks ago, this is what we wanted,” said University of New Brunswick forward Austen Keating. “We had guys coming from all over the country, and they are all top three or top six guys on their teams. Everyone sacrificed what they do on their school teams, and we finished with a gold medal. It’s an amazing feeling.”

Playing in front of a sold-out crowd of 6,000 at the historic 1980 Arena, the Canadians looked to hush the American fans who wasted no time with the “USA, USA, USA” chants.

“When we came out for the first period, the barn was rocking,” said Keating. “There is a lot of history, and we knew they were coming. Our start was huge.”

Early in the first, it was the Canadians hopping all over the American defence, hemming in the Americans and testing netminder Ryan Kenny. Canada broke through on their eleventh shot when Keating tipped a Justin Bergeron point shot past Kenny, delighting the Canadians in attendance.

Canada continued to dictate play, with Trois Riviere’s Zachary Lavigne and Toronto Metropolitan’s Kyle Bollers – a former Oshawa General and the OUA’s leading scorer with 27 points in 16 games – getting breakaway chances, but both were thwarted by Kenny. Then, at 6:55 of the period, Manitoba’s Brett Davis took a Bergeron seam pass and made no mistake burying his seventh of the tournament.

Canada went into the intermission up 2-0 and holding a decisive 18-3 advantage in shots and took the game completely away from the Americans in the second. Canada made it 3-0 when UPEI’s TJ Shea broke up a play and found Bollers for the tap-in finish and less than a minute later, it was Lavigne tipping in a Noah King shot, making it a four-goal game. Late in the frame, the United States would get one back, scoring shorthanded to give the fans something to cheer about. But less than 30 seconds later, New Brunswick defender Adam McCormick silenced the crowd when he scored on the man advantage. 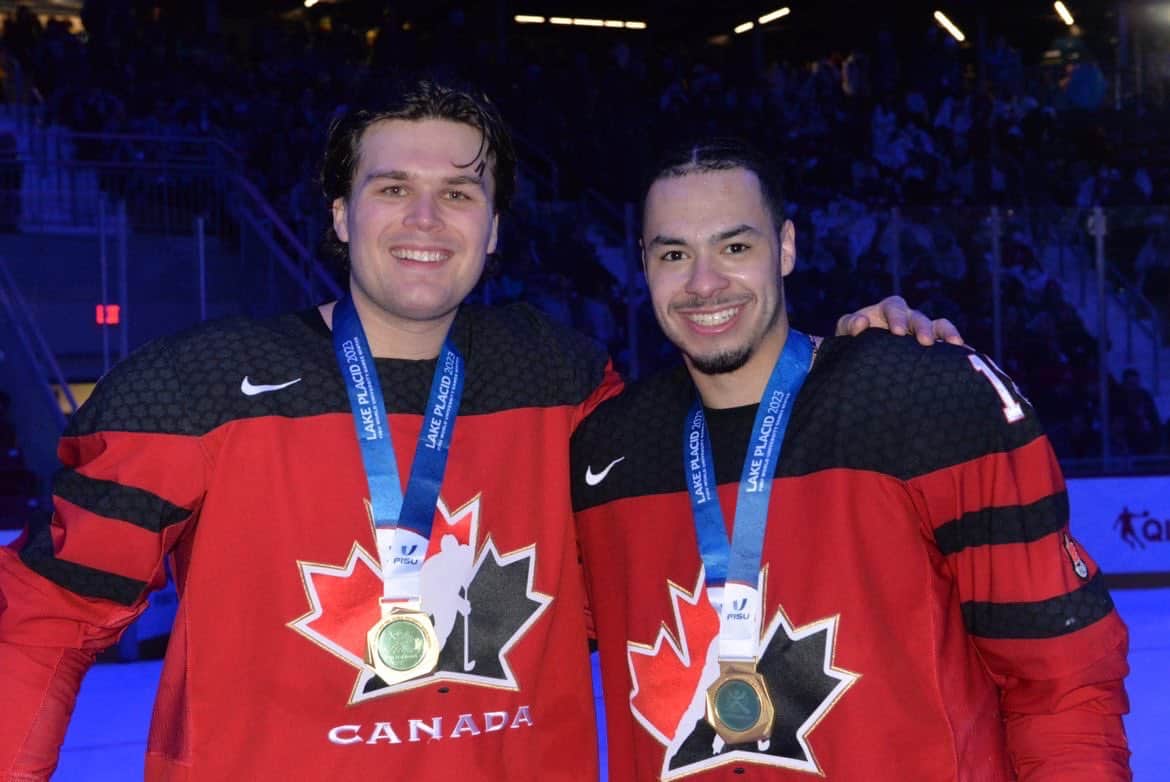 Though USA cut into the lead late in the game, the Canadian got an insurance goal when Concordia winger Tyler Hylland – playing in memory of his mother – put the exclamation mark on the game and the tournament in the last minute to make the final 7-2. The final shots were 47-19 for the Canadians as Canada played suffocating defence, led by another former General, Matt Brassard.

In true team fashion, 12 players on the roster hit the scoresheet, underlining the team’s depth.

“We have grown so close within these last two weeks. It has been an amazing experience,” said Keating, postgame. “This is something we will all remember forever.” 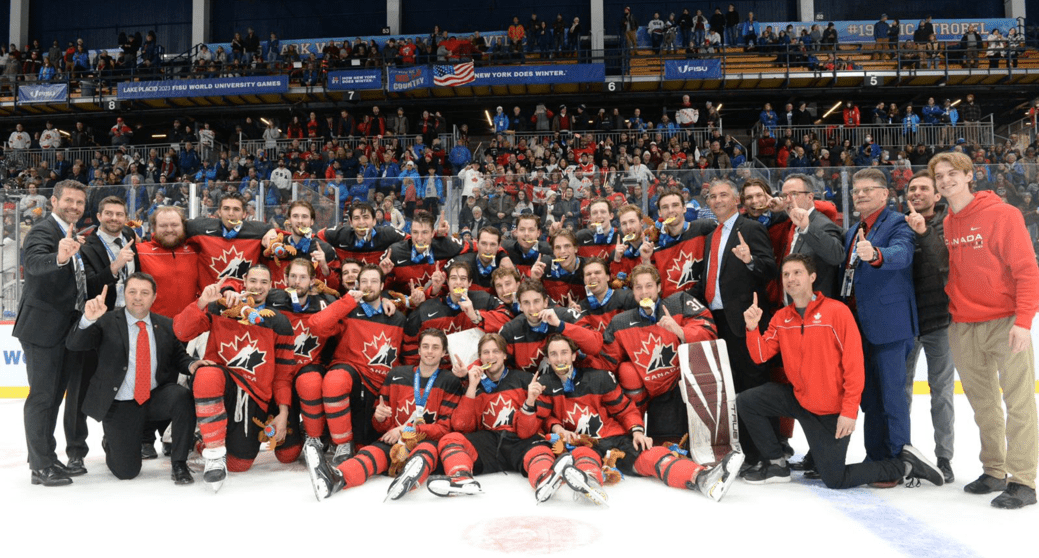 On the women’s side Canada was just as dominant, going 5-0 on their way to the championships and a Canadian sweep of the gold medals in hockey.

The U Sports women defeated Japan 5-0 in the final Saturday night. 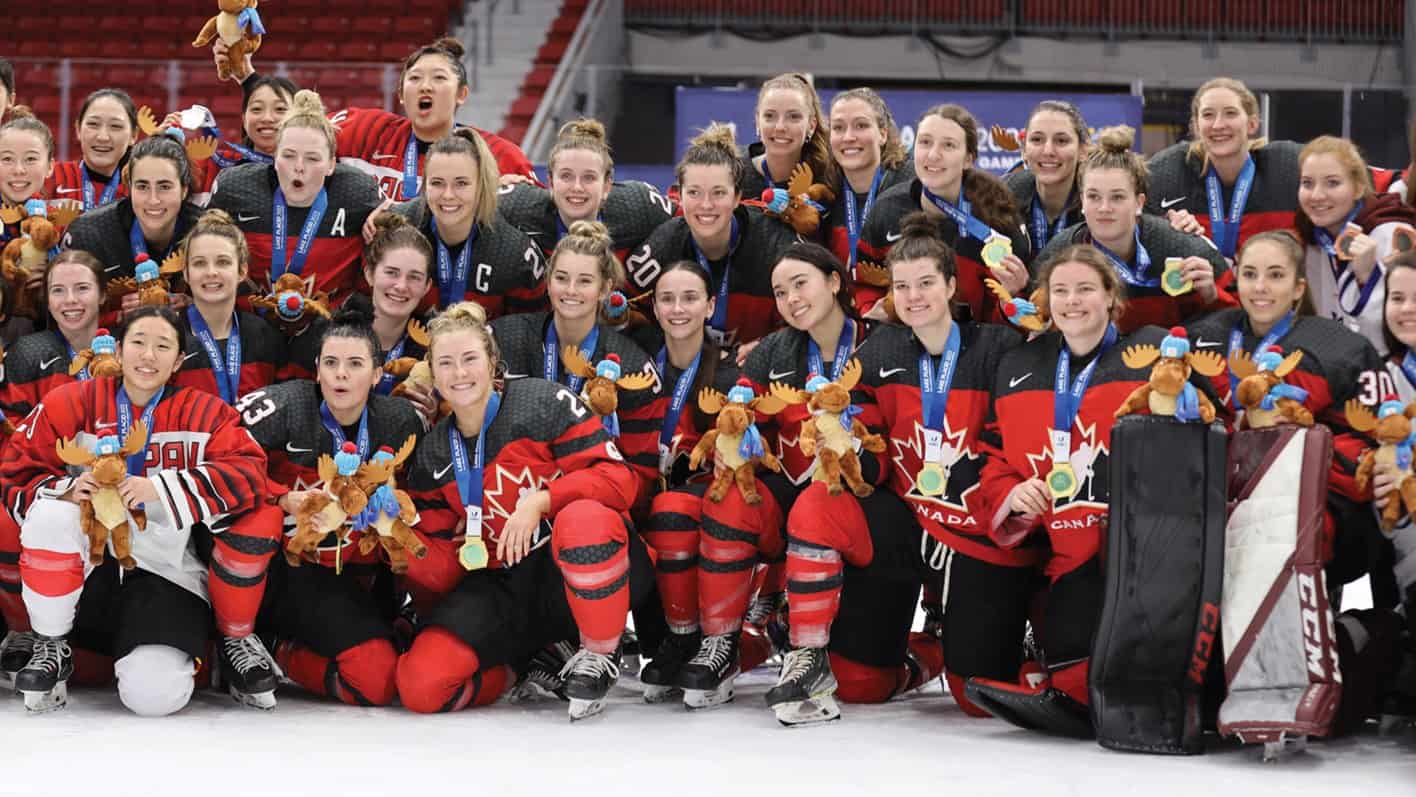