Before you run you must learn to walk, as the saying goes. In the case of a major development planned for Oshawa’s long-suffering First Avenue neighbourhood, landowners First Oshawa Holdings know that before they build, they have to clean up the site first.

To that end, the developers are undertaking environmental assessments for soil and groundwater sampling for the two properties involved: 144 and 155 First Avenue.

The lands, home to a glass factory for a century and directly across the street from the planned new central Oshawa GO Station, will eventually host a massive mixed-use development, including multiple residential towers with a variety of commercial uses at street level, an urban park and a pedestrian promenade.

The EAs, which will cost approximately $21,500 (144 First Avenue) and $39,500 (155 First Avenue) will be partly funded by a pair of grants from the City of Oshawa that will allow First Oshawa Holdings to recover half the costs.

It’s early days for the development – no formal applications for redevelopment have been submitted – so other details and timelines have not yet been revealed. Preliminary work has already begun on the GO Station immediately to the north, with the optimistic expectations having the new station up and running in about three years.

News of any development in the area has been a long time coming for residents of the area, who saw the Knob Hill Farms grocery outlet – at one time the largest grocery store in the country at 226,000 square feet – leave town in 2000 and the glass factory follow nine years later.

When Metrolinx finally gave the green light to the construction of four new stations – including the long-awaited central station at the Knob Hill Farms site – it was only a matter of time before the other dominos would fall on First Avenue, which has sat forlorn and forgotten and a far cry from first for the last 20 years.

Which is why Oshawa Councillor John Gray was excited when plans for the development at 144/155 First Avenue were announced last spring. “It’s all driven by the GO Station,” he said, adding that it will lead to a major renewal of the area. “That’s what makes it so exciting.” 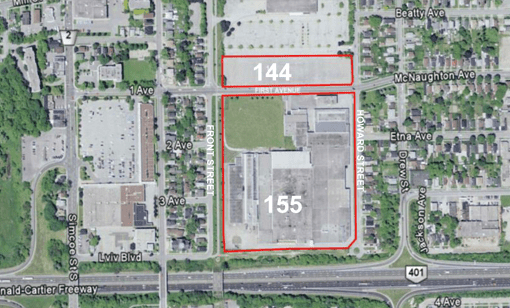