Electric Buses Are Coming to Brampton 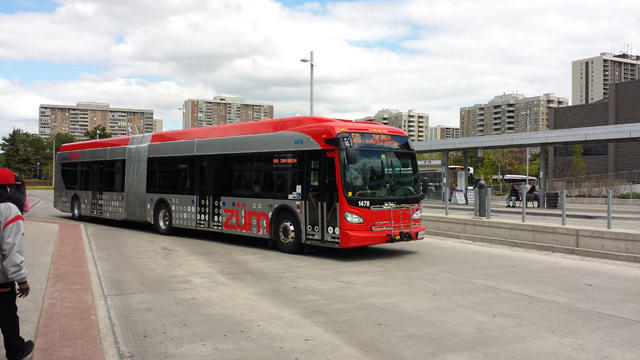 In a city where transit–or aspects of transit, to be fair–has been exceedingly contentious, it’s nice to read some exciting news on that file.

In a city where transit–or aspects of transit, to be fair–has been exceedingly contentious, it’s nice to read some exciting news on that file.

The electric buses could hit city streets as early as spring 2018.

“The Pan-Ontario Electric Bus Demonstration & Integration Trial is a unique partnership model that is the first of its kind; involving multiple levels of government, bus manufacturers, system integrators and funding partners collaborating in an unprecedented way on breakthrough technology to improve the environment,” a city release reads.

While Brampton won’t be the first city to embrace electric public transportation, it’s never too late to tackle innovation–especially when environmental consciousness is top of mind.

Electric buses benefits cities simply by decreasing fuel consumption and reducing greenhouse gas emissions. According to the city, the vehicles proposed for the trial will take approximately three to five minutes to receive a full charge from the high powered overhead chargers.

“As a fast-growing Canadian city undergoing major urban intensification, Brampton’s public transit users expect and deserve leading-edge technology and superior services,” says Brampton Mayor Linda Jeffrey. “We are excited that Brampton is the host for the electric bus pilot project that is based on an innovative partnership model. This initiative demonstrates our world leading commitment to bringing strategic, future-ready transit solutions that are environmentally friendly and help move our people more efficiently.”

According to the city, the electric buses will be launched on two existing conventional routes in Brampton: routes 23 Sandalwood and 26 Mount Pleasant. New overhead charging stations will take shape at the Mount Pleasant Village terminal, the Queen Street/ Highway 50 Züm station and the Sandalwood Transit Facility.

As far as money goes, total capital costs for the project are anticipated to reach about $13.6 million. The city expects the costs to be offset through funding from other levels of government.