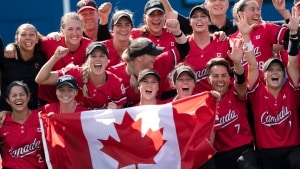 Canada’s Women’s Softball team won their first ever medal in the sport with a 3-2 victory over Mexico in Yokahoma to take the bronze.

Host Japan outhit the favoured Americans 8-3 and outscored them 2-0 to win the gold.

Canada, with four players still with the team from a heartbreaking fourth-place finish 13 years ago in Beijing – the last time the sport was in the Olympics – won in a driving rain, thanks mostly to a two-out, two-run single by Emma Entzminger in the bottom of the second.

Beaverton veteran sparkplug Joey Lye came off the bench for most of the tournament, earning a start in the final preliminary match against Italy.

In women’s soccer, Canada tied Great Britain in the final pool game to finish second in the group with a 1-0-2 record.
They will play Brazil in the quarter-final game on Friday.

Stephanie Labbe was back in net for this game, replacing Whitby’s Kailen Sheridan, and Pickering’s Jayde Riviere got the start at fullback alongside star defender Kadeisha Buchanan.

Nichelle Prince (Ajax) came on in the 54th minute and that seemed to spark the Canadians as Adriana Leone opened the scoring a minute later.

Caroline Weir responded for the Brits in the 85th.

In the women’s Mountain Biking Cross Country event, muddy conditions played havoc with the route and caused problems with many of the pre-race favourites, including Canada’s Catherine Pendrel, who finished 18th.

The Swiss completed an historic 1-2-3 finish to sweep the medals.

In Field Hockey, Canada dropped a 4-2 decision to the Netherlands to fall to 0-3 in the tournament. Pickering’s Keegan Pereira has been one of Canada’s bright spots up front, scoring against Germany in the tournament’s opening match.

And in Badminton, Pickering’s Nyl Yakura and partner Jason Ho-Shue dropped a 21-15, 21-13 decision to a Malaysian duo in mixed doubles.

The Canadian pair dropped to 0-3 and were eliminated.