Over the past year or so, the city of Mississauga has conducted numerous public open houses and meetings on the future of Dundas Street.

Over the past year or so, the city of Mississauga has conducted numerous public open houses and meetings on the future of Dundas Street. The initiative has been labeled “Dundas Connects” and the purpose of the meetings has been to solicit feedback from residents and others on how best to utilize the 17 km of Dundas Street within Mississauga that stretches from the border of Oakville to the western edge of Toronto at the Etobicoke border.

The final public meeting on Dundas Connects recently took place at the Living Arts Centre. City staff and consultants presented their recommendations on the future of the Dundas Street corridor to the public. These recommendations will be drafted into a report over the summer for presentation to Mississauga City Council in the fall of 2017.

The slides for the final presentation from last week’s public meeting can be seen here, and it centres on three key areas:

Based on all the prior public meetings conducted, the presenters distilled the main points of what people liked and didn’t like about the current Dundas Street:

The overall vision is to develop Dundas Street into an urban, rapid transit-served street; something walkable and bikeable that’s accessible and affordable. Basically, a request that Dundas become a street for everyone. Dundas will also be a place that will see targeted growth in population and employment with protected and stable residential neighbourhoods and heritage assets. Finally, it should be a corridor that has public spaces, community services, and facilities that support a high quality of life.

The plan is not calling for intense densification along every inch of the 17 km stretch of Dundas. The plan calls for buildup in certain main intersections along Dundas, such as Dixie, Cawthra, the Cooksville area, Erindale, and Erin Mills, as the diagram shows below:

Dundas Connects calls for “transformational” build up of various nodes along the corridor, from the dour suburban landscape it currently is (not that there aren’t amenities, mind you!) into something that is more interconnected by modifying existing and building new streets. For example, here is the Dixie-Dundas intersection as an example of how to change it using the right land use policies and urban design: 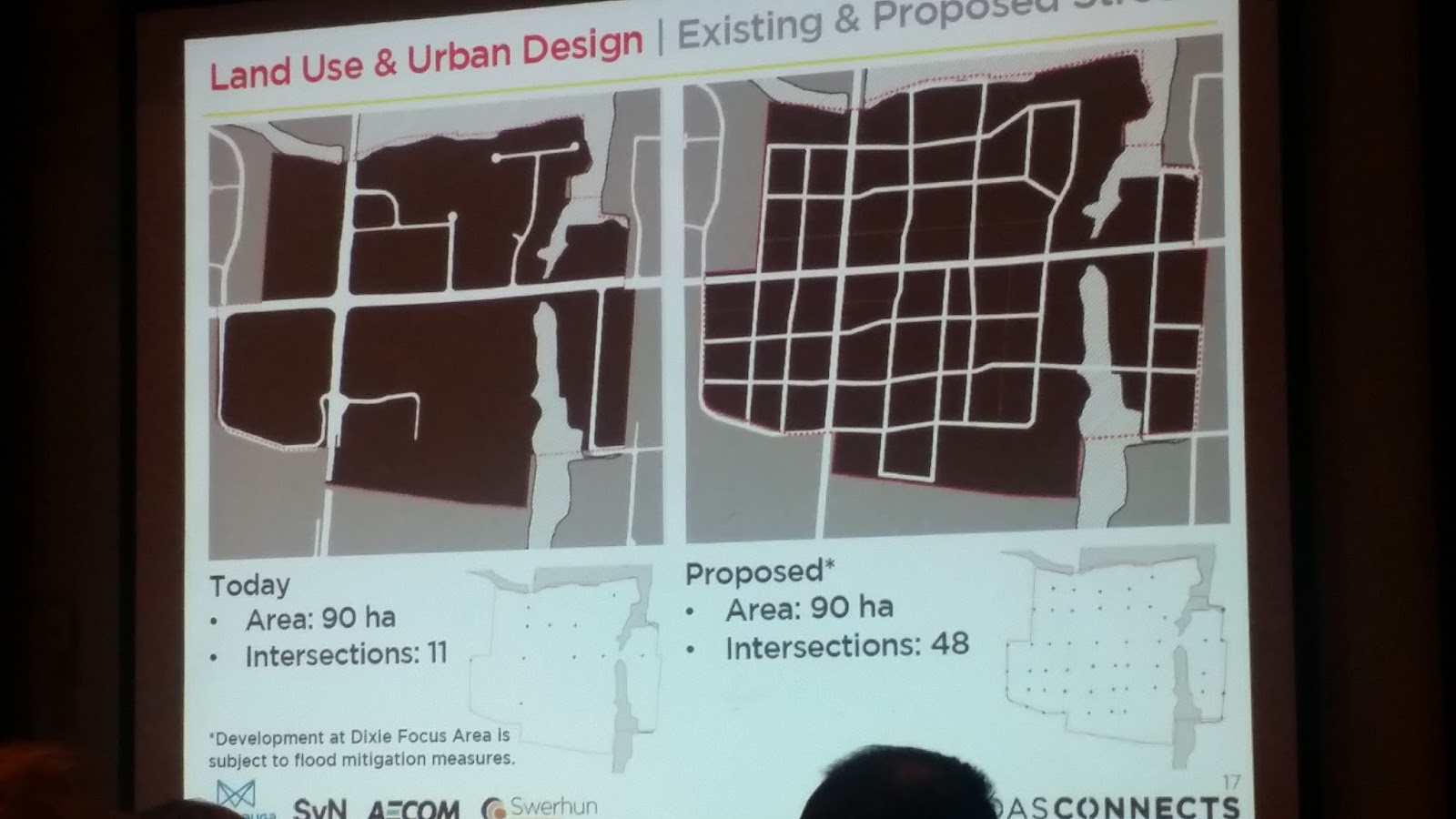 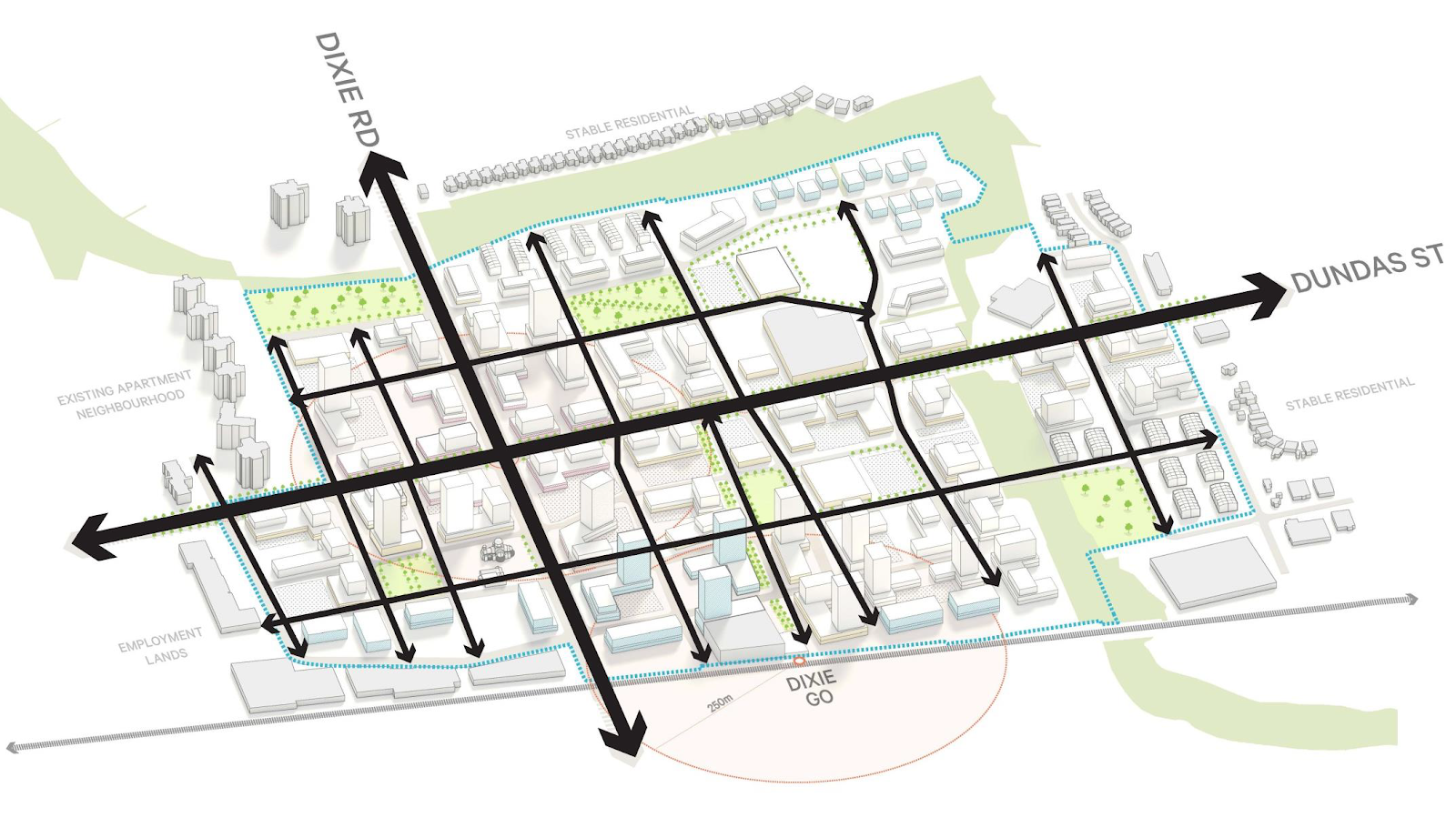 Of course this planned interconnectivity of streets between the Dundas corridor at the designated nodes is not some kind of “one size fits all” template. Here is a proposal for the intersection at Dundas & Erindale Station Road, which is more residential than Dixie and Dundas, hence had less additional side streets: 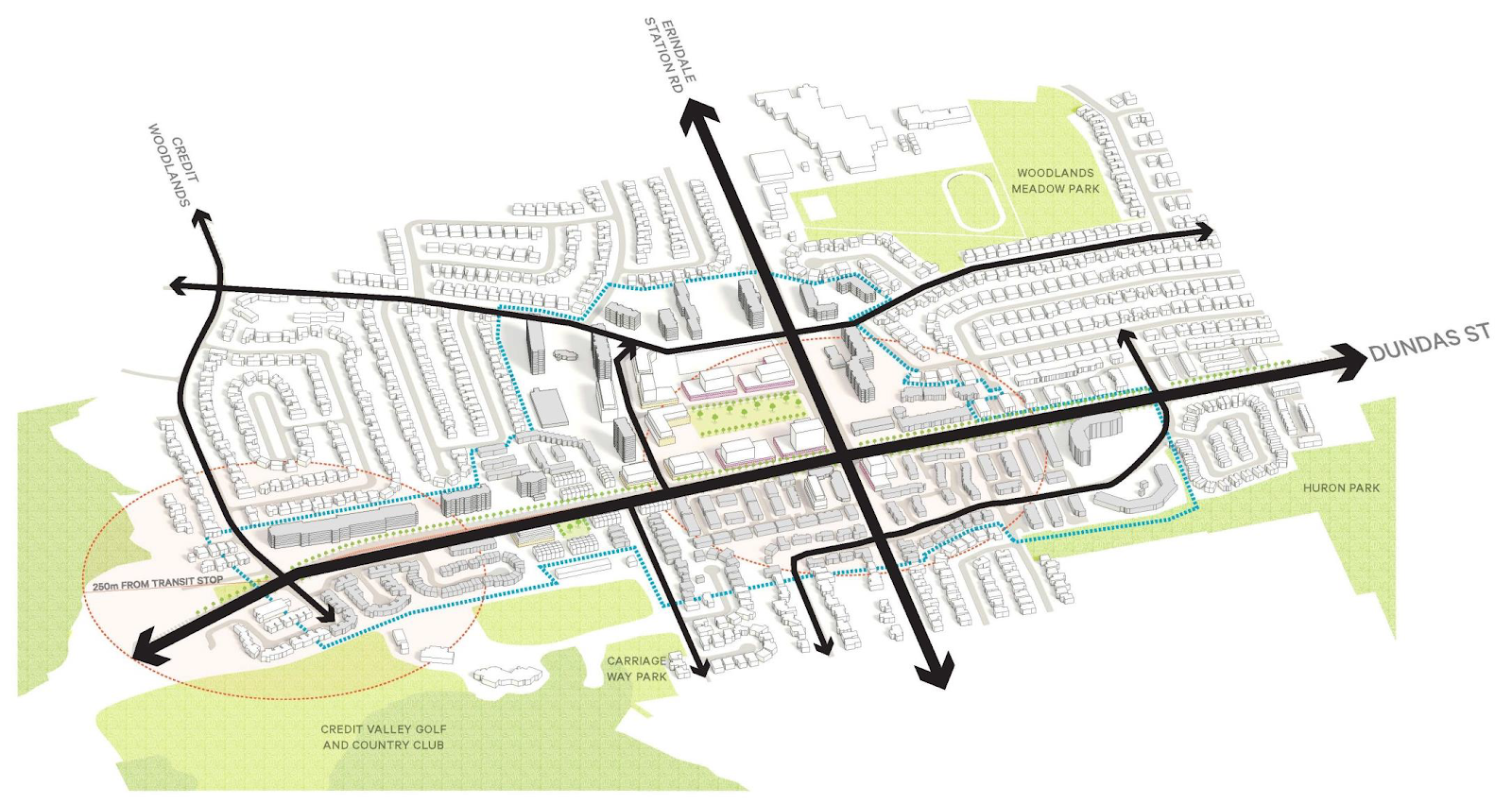 The big takeaway from Dundas Connects was what kind of transit mode would service the corridor. After looking over the alternatives of doing nothing, LRT, subways and even skytrains (modeled after Vancouver), Dundas Connects settled on putting BRT along the Dundas corridor for the following reasons: 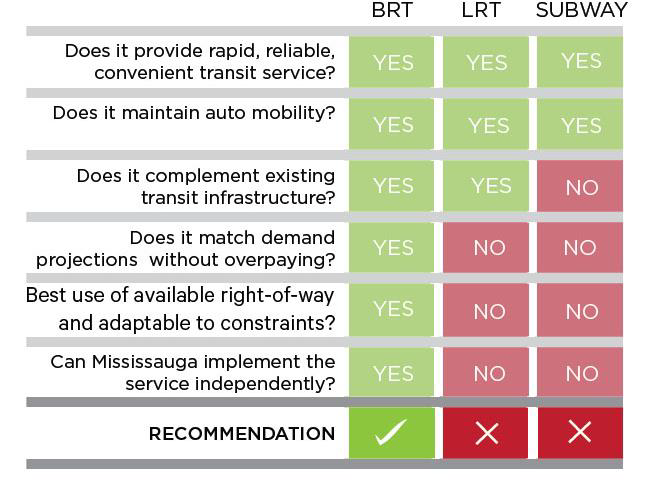 Based on the various criteria that were used to measure against the various transit options, the Bus Rapid Transit (BRT) option was the only one that met all those criteria. If you need to see what vision they had in mind when it comes to a Dundas BRT, here’s a video of what York Region has been doing with dedicated bus lanes:

But through all the statistics showing that bus rapid transit along Dundas was the most viable mode to implement, there were people raising the inevitable spectre of a subway. Why is a subway not as viable as BRT? I guess Insauga’s little April Fools prank was taken a tad more seriously than we realized.

One important thing to know about this proposed BRT is that there is a section along the line known as “BRT Reversible” which as you can see below is around the stretch of Dundas nearby the Erindale Village neighbourhood. This is to allow what is known as a lane reversal, which is an arrangement where traffic is permitted to flow in different directions during different times of the day, as this traffic management page from the City of Calgary explains.

City staff replied that after analyzing current capacity they did not see the ridership enough to justify a subway. Another issue was maintenance; subways also tend to break down more easily than buses do. If you think about it, when a subway breaks down then the whole line is stalled, whereas a bus can be pulled over to the side so as not to impede other bus along a BRT from moving along.

The last main takeaway of the Dundas Connects plan is to beautify Dundas with trees, bike lanes and pedestrian walkways, as this above graphic shows. More artistic renderings are shown below: 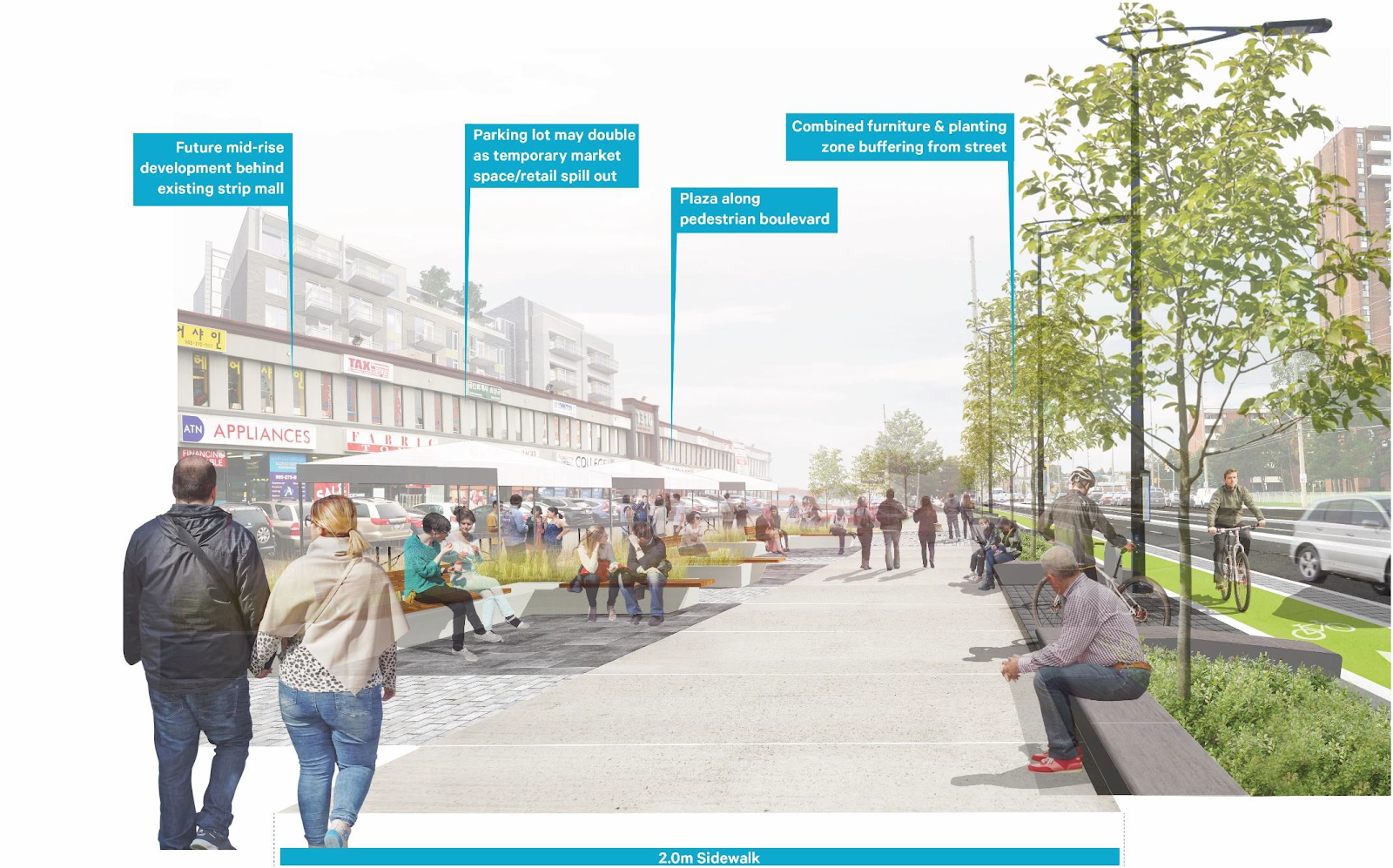 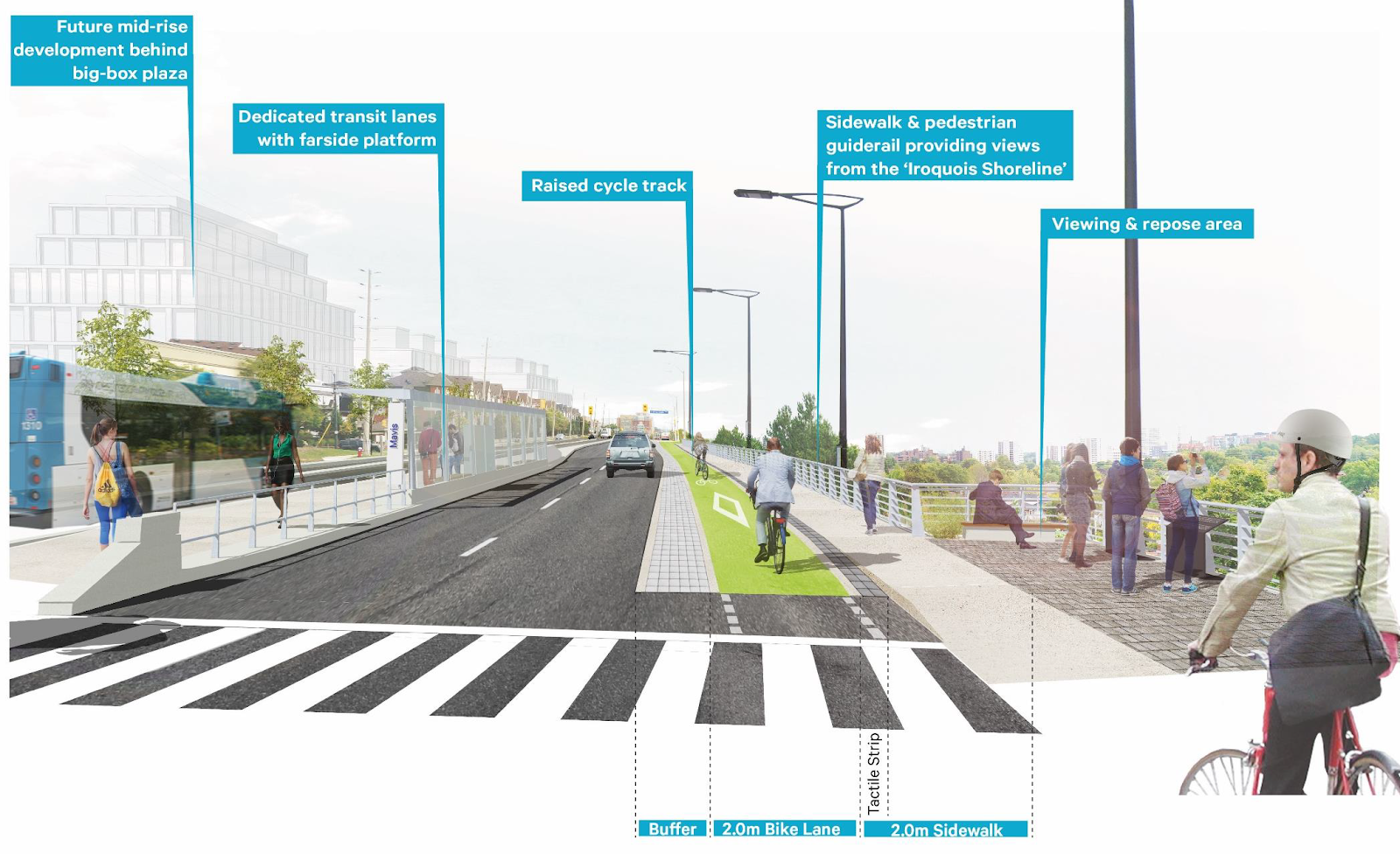 There hasn’t been much indication that Mississauga City Council has much objections, if any, regarding such proposals for Dundas. These specific ideas, BRT, intensification and building a “complete street” that is not primarily for car users but diversifies the street’s function for all transit modes. Barring any unforeseen circumstances, it looks like Dundas Connects will become a reality.