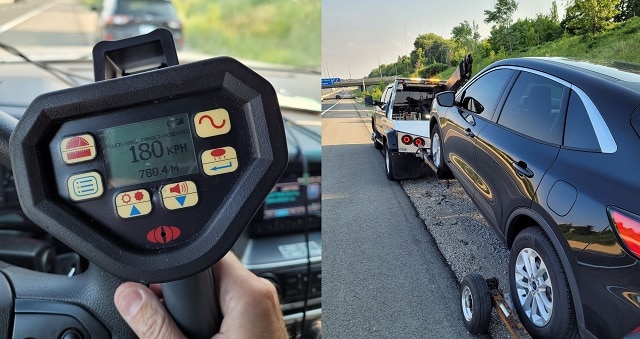 A kickboxing enthusiast had a heavy foot on Highway 407 on Tuesday night.

The Burlington division of the Ontario Provincial Police says it nabbed at a 42-year-old driver travelling at 180 km/h on the 407 on Tuesday (July 6). They were charged with stunt driving, which means the automatic impoundment of their vehicle and the suspension of their driver’s licence.

“(The driver) will be using their legs a whole lot more for the next week or two,” a tweet from the OPP’s Highway Safety Division quipped.

#BurlingtonOpp stopped a 42 yr old driver on #Hwy407 this evening, apparently late for a kickboxing class. Driver will be using their legs a whole lot more for the next week or two. Charged #StuntDriving ^kw#SlowDown #ArriveAlive pic.twitter.com/ViUeAjJfOM

The driver’s charge comes less than a week after Ontario’s stiffer stunt driving penalties took effect. As of July 1, a roadside licence suspension was increased from seven days to 30, and the vehicle impoundment was increased from seven days to 30. The threshold to trigger a stunt driving charge is now travelling 40 km/h above the speed limit, down from 50.