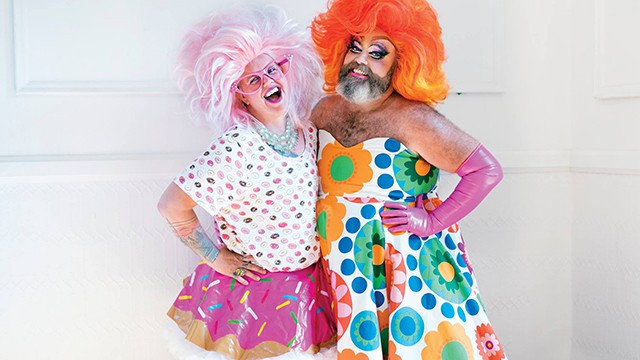 At a time when the province is reverting back to a curriculum that critics say does not adequatly address crucially important LGBTQ issues, inclusivity is still front and centre at a regular children’s event run by the Art Gallery of Mississauga (AGM).

For some time now, drag queen storytime events have been gaining traction in libraries in Toronto and other major cities, and now a well-known duo is getting ready to read to children and their families in Mississauga.

For those who have never heard of the growing trend, you’ve been missing out.

In June 2017, even the iconic Royal Ontario Museum became one such North American venue to host Drag Queen Story Time.

According to NOW Magazine, the initiative came to Toronto about two years ago when Fay Slift and Fluffy Soufflé got wind of the inaugural Drag Queen Story Hour in San Francisco.

Now, Fay and Fluffy are making an appearance at the AGM Tot Spot event on Friday, September 21.

“Drag stars Fay Slift + Fluffy Soufflé invite you and the kids in your life to a special event with books and fun,” the AGM wrote on the event’s Facebook page. “Fay & Fluffy’s Storytime is great for kids and adults of all ages.”

According to Fay and Fluffy’s website, Fay (JP) and Fluffy (Kaleb) are both drag performers and experienced child educators.

JP is an educator with the Toronto Distric School Board and Kaleb is currently an independent cultural producer, as well as a child care provider who has worked as a “manny” for years and operated a home daycare.

The website says events typically include readings of the duo’s favourite books and a Fay + Fluffy-led activity (such as a dance, drama performance or creative activity).

“We want to support families with LGBTQ2S parent(s) and gender variant children, and read culturally diverse books, by providing a supportive and inclusive environment focused on fun,” the duo writes on their website.