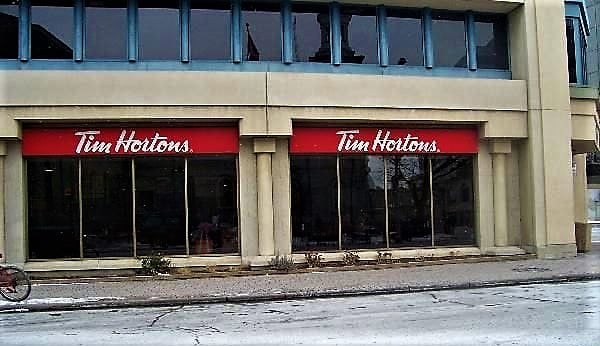 Caffeine lovers will need to find another place to get their fix in downtown St. Catharines.

The only Tim Hortons location in downtown at 70 James St shuttered its doors last week.

The restaurant had been operating at reduced hours since the beginning of the pandemic and as of last week, there’s been a sign on the front door directing customers to their location at 333 Ontario St, more than two and a half kilometres away.

Inquiries to the Tim Hortons’ head office by InNiagaraRegion have gone unanswered.

However, the company, as ubiquitously Canadian as maple syrup and hockey pucks, has seen some major shake-ups in the past decade.

Restaurant Brands International, in turn, is majority-owned by Brazilian investment firm 3G Capital, which made it an easy target for the company’s critics, both those angry about its treatment of workers or those underwhelmed by the food.

As of March 2022, there were 4,949 Timmies outlets in 15 countries around North American and the world. It is unknown how many are still in operation as 3G Capital has a reputation of cutting costs at every corner, though the number is likely still above 4,900.