Downtown Port Colborne just got a lot more colourful as it unveiled a brand new rainbow crosswalk at the corner of West Street and Clarence Street.

Back in June, the Downtown Port Colborne BIA brought a report to Council, suggesting the need to be the next “Safe Space” landmarked in Niagara by a rainbow crosswalk.

With Council’s approval, the rainbow crosswalk was installed recently, showcasing the community’s commitment to celebrating diversity, inclusiveness, and equality with the LGBTQ2+ community.

“Port Colborne is a destination worth exploring, and the Downtown Port Colborne BIA is confident this show of support will draw in social and economic benefits to the city,” said Jesse Boles, Downtown BIA president.

She then thanked the partners in the project, such as Port Cares, Positive Living Niagara, Reverend Jody Balint of St. James and St. Brendan’s Anglican Church, and local real estate agent Carlie Smith from Royal LePage, for “being advocates of this rainbow crosswalk.”

She added a special thank you to Meridian Credit Union “for being the title sponsor. Meridian’s contribution to this project acknowledges their commitment to inclusivity and diversity in Port Colborne, and we’re lucky to have them in our business community.”

“We’re proud to be unveiling the rainbow crosswalk this morning and look forward to celebrating the LGBTQ2+ community. This was a collaborative effort by the Downtown BIA and City staff, and I thank everyone involved in making this project a reality.”

The crosswalk was installed using pre-formed thermoplastic material; a heavy-duty, durable, intersection-grade product which is applied with an adhesive to the asphalt and then heated using a propane torch essentially melting it into the road surface. The method creates a much more durable surface, lasting six to eight times longer than traditional traffic paint. 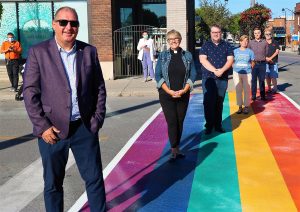