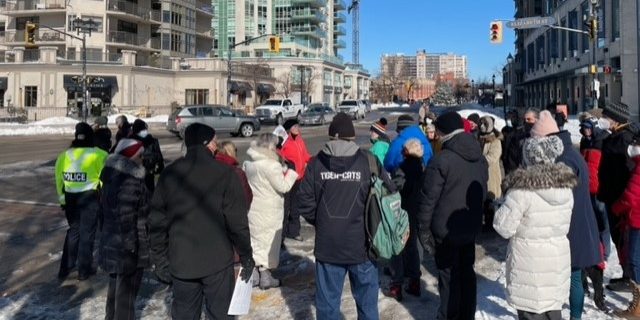 A second walking tour of downtown Burlington development proposals was another success, according to Lisa Kearns, Ward 2 councillor.

About 35 people showed up for the event, fewer than the 60 who turned out the first time it was held in November. But severe cold weather might have have something to do with that.

The goal of the event is to provide real-life examples of where future development is planned, rather than just a static point on a map.

“People learn in different ways, and this hands-on example will allow them to explain to other people what it happening. It will bring about a richer community conversation.”

The tour kicked off at the Waterfront Hotel Lands, which abuts the east end of Spencer Smith Park. With public meetings about both the general site and specific development proposal scheduled over the next couple of weeks, it’s the development highest on city council’s agenda.

“Generally, the comments were similar to what many of us already think. Participants said the proposal is too big, it should be reduced in height and set back more to allow additional greenspace.”

According to Kearns, the three proposals that are furthest along the development application process are:

Kearns couldn’t give a time estimate on when any of the projects might see a shovel in the ground as the application process can take plenty of twists and turns along the way to fruition.

With the success of now two walking tours, Kearns said consideration is already being given to making this a regular event, perhaps quarterly going forward, with the next one tentatively being planned for early April.

More details about Ward 2 planning projects can be found on the city’s website.