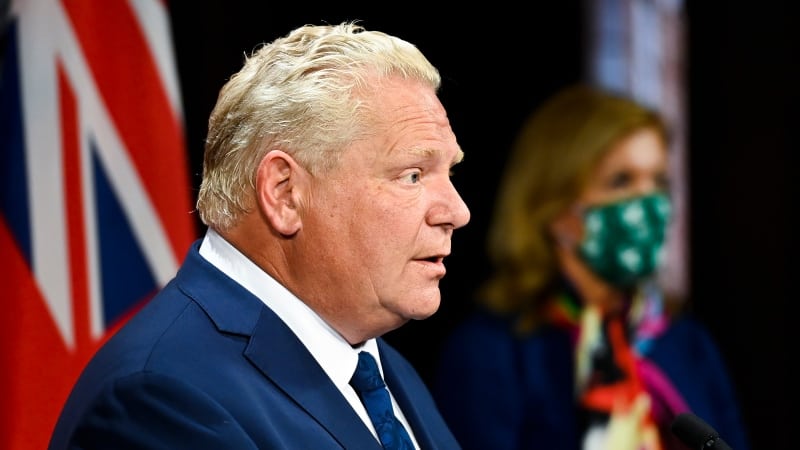 At an Oct. 30 press conference, Ontario Premier Doug Ford said that the province’s health table is looking at ways to ease restrictions on businesses in Peel (Mississauga, Brampton and Caledon), Toronto, York and Ottawa in the not-too-distant future.

The restrictions, which came into effect in Peel, Toronto and Ottawa on Oct. 10 after a record number of new cases of COVID-19 were reported in the regions, prohibited restaurants and bars from offering indoor dine-in service and forced gyms to close completely.

Today, Ford signalled that the province is looking at reopening shuttered or restricted businesses in modified Stage 2 regions when the 28-day rollback expires on Nov. 6. He also suggested that health experts are looking at taking a more “surgical approach” to setting restrictions, adding that some parts of Toronto have much higher case counts than others.

That statement came one day after Ford talked about the impact on Caledon, a Peel town with a low case count that was tossed into Stage 2 simply because it was part of the Peel Public Health unit.

Mississauga city councillors have also called for a more data-focused approach, arguing that blanket restrictions across Peel are harming businesses in wards with low case counts and driving residents to nearby Halton to eat-in and workout.

The announcement comes just one day after new data released by the province revealed that bars, restaurants and gyms were not a huge driver of new COVID-19 infections in the hard-hit regions.

The data also suggests that Ontario has, so far, avoided a worst-case scenario in terms of hospitalizations and deaths.

While the restrictions have been in effect for almost three weeks in Peel, Toronto and Ottawa, a high number of new cases are being reported every day–particularly in Toronto and Peel.

The recent uptick in cases has been attributed to private indoor gatherings over the Thanksgiving long weekend.

Public health officials, including Peel Medical Officer of Health Dr. Lawrence Loh, have encouraged families to exercise precautions this weekend in order to prevent a Halloween-related surge in new cases.

Earlier this month, Ontario’s Chief Medical Officer Dr. David Williams recommended against trick-or-treating in Peel and other hotspot regions but stopped short of calling for an outright ban. Loh and other officials have cautioned against Halloween parties and gatherings and have asked people to celebrate only with members of their immediate households.

As of now, private gatherings are restricted to 10 people indoors and 25 people outdoors.