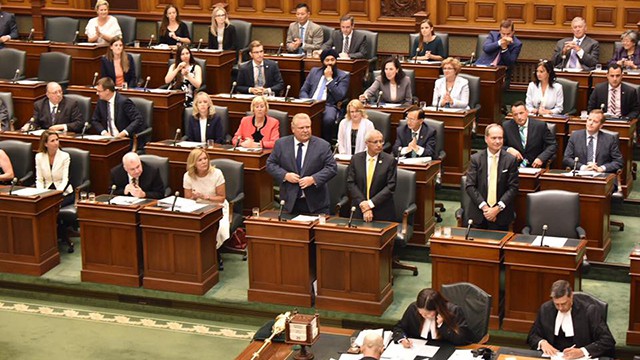 The newly elected PC government recently announced that it would reform social assistance in the province and “wind down” Ontario’s basic income pilot project.

The province says the reforms will “help more people break the cycle of poverty, re-enter the workforce and get back on track.”

“We need to do more than just help people remain mired in poverty,” said MacLeod. “We’re going to hit the pause button on the previous government’s patchwork system and replace it with a system that helps stabilize people in need and support them to succeed.”

MacLeod said that Doug Ford’s government has set an accelerated 100 day deadline to develop and announce a social assistance program that “focuses on helping people lift themselves out of poverty.”

The basic income pilot project is a little over a year old.

Back in April, the provincial government, then led by Kathleen Wynne, said that a total of 4,000 participants are enrolled in the basic income pilot in Lindsay, Hamilton, Brantford and Brant County and Thunder Bay.

Here’s how much the 4,000 basic income recipients are currently getting under the program:

Participants were chosen based on a few factors, including if they were between the ages of 18-64, and if they were living on a low income (under $34,000 per year if single or under $48,000 per year as a couple).

The pilot was considered fairly groundbreaking and was recognized internationally as a finalist in the Fast Company’s World Changing Ideas Awards.

In the intermediate term, the PC government says it will provide current Ontario Works and Ontario Disability Support Program recipients with a 1.5 per cent increase in support rates.

MacLeod says the basic income wind down will allow the province to “focus resources on more proven approaches.”

“Our plan will help get people back to work and keep them working, while supporting people with disabilities to work when they are able and participate in their communities,” said MacLeod.

The government argues that current social assistance programs are perpetuating the cycle of poverty, adding that one in five Ontario Works participants stay in the program for five or more years.

It is not yet clear what the reform will look like.