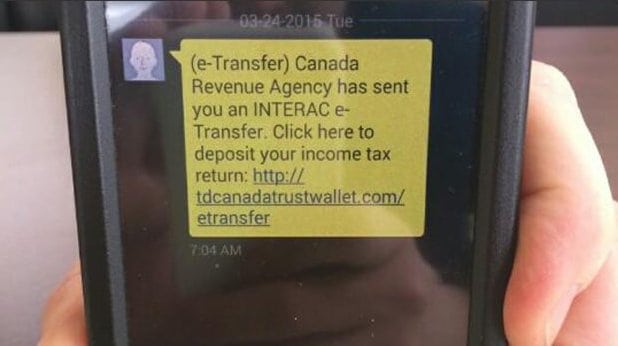 Police are warning residents in Mississauga and the Peel Region not to fall for any text message scams.

Citizens have been receiving suspicious texts claiming that the Canada Revenue Agency (CRA) has sent them an Interac e-Transfer for their income tax returns, along with a link to claim the money.

Peel Regional Police have declared this to be a phishing scam, and are reminding the people who get this message that the CRA will never actually send you an email money transfer.

Sadly, this isn’t the first kind of CRA-related scam Mississauga has seen. We wrote earlier about another scam in which people were supposedly getting phone calls from the CRA, demanding tax payments to be made via iTunes gift cards.

Knowing the tricks and tactics these scams use will greatly reduce your chances of falling for one. Be wary of anything that seems suspicious, and if you have information concerning a scam, report it to the police immediately.