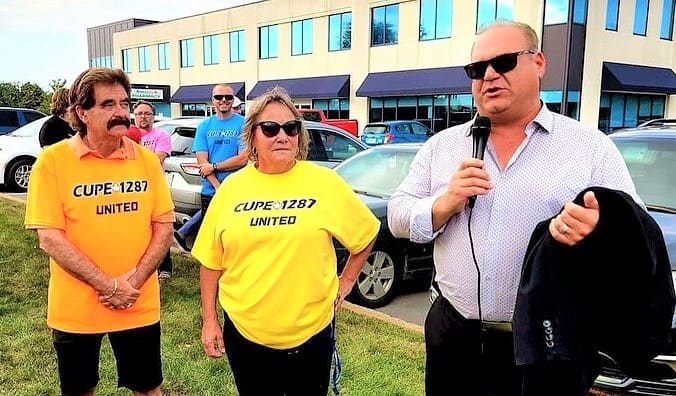 Hundreds of CUPE 1287 municipal employees gathered on the front lawn of Niagara Regional headquarters in Thorold prior to yesterday’s (August 25) council meeting to voice their disapproval over plodding contract negotiations.

However, the union members brought along a mascot – a donkey named Amigo with a blanket over his back bearing the union’s name – and he expressed himself with a little more clarity.

When security spotted the donkey, they asked his handler to take him back outside. The handler did precisely that but as he turned Amigo around to head back out the door, the donkey dropped a fresh pile of “number two” on the lobby floor.

The mess was quickly cleaned up by headquarter custodians but it was at least one light-hearted moment in an otherwise contentious situation.

When the CUPE 1287 contract ended December 31, 2021, it looked like the two sides had successfully renegotiated back in March.

However, union members turned thumbs-down on the initial offer and subsequently, CUPE 1287 authorized their members to take strike action if a fair deal cannot be reached during ongoing negotiations.

Region of Niagara’s municipal employees represented by CUPE 1287 have authorized their union to take strike action if a fair deal cannot be reached during ongoing negotiations.

“Our goal has always been to negotiate a fair contract that allows us to continue providing high-quality public services to Niagara residents,” said Murray, a wastewater operations clerk.

“We are not asking for much – we simply want the employer to prioritize employee well-being and workforce stability.”

Niagara has a total of 3,500 employees, making CUPE 1287 the second largest bargaining unit.

Murray explained that in the pandemic the Niagara municipal workforce were often asked to make sacrifices, including taking on jobs that they had no prior experience of, such as performing COVID-screening at senior homes, and aiding in the COVID vaccination program.

“As municipal workers, we try our best to provide services that people rely on and we accept that our jobs entail some level of sacrifice,” Murray said.

“But we also expect fair treatment from our employer. Unfortunately, we have endured a frustrating round of bargaining whereby the Niagara management team has failed to acknowledge our efforts, sacrifices and commitment.”