Does Mississauga Have a White Supremacist Problem?

At first, that sounds like a ludicrous question. Canada is not the United States; we have not yet had a massive right wing, neo-Nazi gathering like Charlottesville, Virginia or other racially charged incident like south of the border, nor do we have a political leader seemingly paying lip service to the KKK. We have this inherent sense that we are more socially progressive than the United States.

But even in Mississauga, Canada’s sixth largest city and one of the most diverse communities in the country, we have had incidents lately that are quite troubling. There was this contentious Peel District School Board (PDSB) meeting where a man from a group called Rise Canada said Muslim students weren’t even Canadian. Another school board meeting over accommodating Friday prayers for Muslim students saw a man rip up the pages from the Qu’ran, declaring Islam an evil religion. It also got to a point where Islamophobic protests were being held outside a Mississauga high school.

With hate crimes being on the rise in Canada and the police showing concern, this prompted a conversation, if you will, on a rather contentious topic: Does Mississauga have a white supremacist problem? This “Community Conversation” was organized this past week by Studio 89 and featured a panel of three individuals who have experienced racism, discrimination and who work in the area of advancing human right and standing up for racialized communities experiencing such discrimination.

Malia is currently a student attending University of Toronto Mississauga, and is also a member of the UTM Muslim Students Association. Gilary Massa is a community activist from Toronto, and the GTA Advisory Coordinator for the National Council of Canadian Muslims. Charlotte Lake is also from Toronto, and was introduced as a transgender and anti-transphobia activist.

The first point raised before the presentations was that discrimination takes many forms, such as anti-blackness, indigenous violence, anti-semitism, homophobia, transphobia, anti-immigrant/refugee, and anti-migrant worker. But because they have been prevalent in the news media, this talk centred around white supremacy in relation to Islamophobia.

During the introductions, there was a short slideshow about various examples of the rise of white supremacy, namely the infamous Charlottesville “Unite the Right” rally and NDP leader Jagmeet Singh’s recent confrontation with an anti-Islamic protester. But there was one slide of a painting from renowned Indigneous Canadian artist Kent Monkman depicting how Canada was founded when white settlers colonized and took over Native territory. 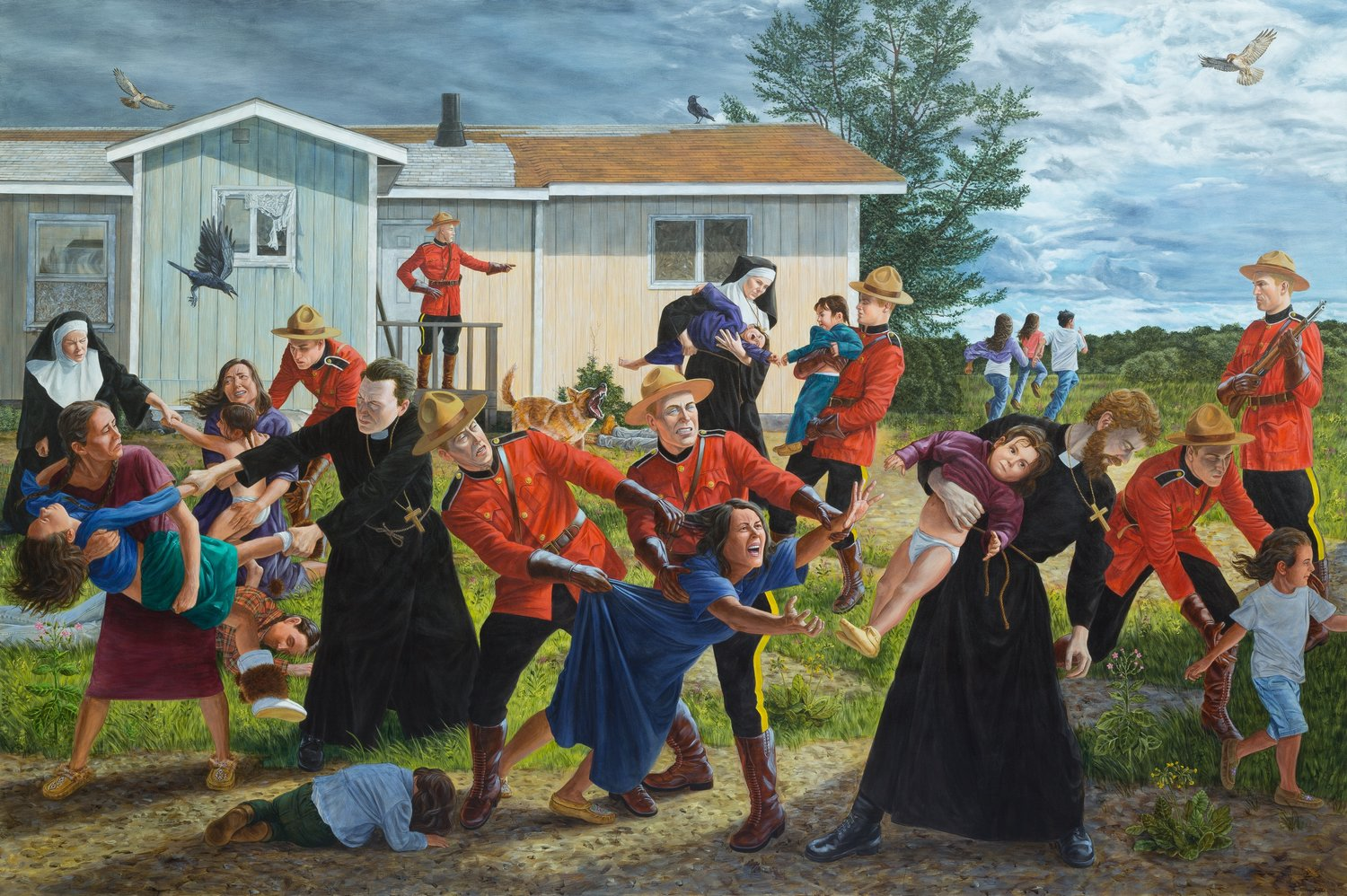 The Scream, by Kent Monkman

The point behind Monkman’s work is that because the country was founded on colonialism, that legacy lives on in the way race relations have unfolded in Canada. In terms of how this has affected Muslims in Mississauga, Malia recalled how students at those Islamophobic protests outside their school were told by protesters “I’m gonna rape you.” This happened right in front of police officers–officers who allegedly did nothing.

Malia said she did not have a high expectation of anything positive coming from Peel Police Chief Jennifer Evans or others, saying there is hypocrisy when politicians and other public officials come out to events to shake their hands and take pictures, but do nothing concrete for the communities when it’s most needed. She also recalled how in Grade 5, a student grabbed the back of her head on her hijab, telling her he was checking to see “if there were any bombs in there,” and the teachers didn’t do anything to reprimand that student.

While no arrests were made at the protests targeting Islamic students, Peel police did eventually arrest and charge a former Mississauga mayoral candidate active on the anti-Islam file in July with hate-motivated crime.

Is there a reason for this seeming inaction on Islamophobia by people in positions of authority, however? Perhaps it is just an inherent trait in white culture that they do not know, at least with Islamophobia, how to properly respond to it. Malia even shared some criteria from the RCMP on how they determine whether someone is getting radicalized. Two of which were watching too many Islamic videos and taking too many trips to a mosque…which, if you’re a young Muslim, is a perfectly normal thing to do.

The next speaker was Gilary Massa from the National Council of Canadian Muslims. She said Canada does have a white supremacist problem, but it was not so much to do with individual white people, but rather a sense of privilege that has been ingrained throughout generations. It is a system where white people believe they have this system they benefit from. As an extreme example of this viewpoint, Massa played a voicemail her organization received talking about the Syrian refugees.

Someone should tell the woman that her assertion that Muslims and Islam were the only source of terrorism in human history is patently false. It’s funny how no one is asking all Catholics to take responsibility for the crimes committed by the Irish Republican Army (IRA), but the double standard for Muslims seems to apply.

But according to Massa this is a familiar form of rhetoric that has been deployed in order to provide some form of justification for this type of viewpoint. She also noted that the so-called Alt-right groups proliferating today have adopted the tactics of white supremacists, employing this racial rhetoric, but not calling themselves that in order to hide behind a curtain of normalcy.

Charlotte Lake then gave some information about the tactics that white supremacist groups use and how people should confront them on their racism, reminding everyone that not all white people are racists. But with the recent events in Charlottesville, it showed that these Alt-right groups are getting more bold and gathering in public places to see what how far they can push the envelope to see what they could get away with doing.

Lake also suggested that simple actions could do much to de-escalate racism, such as removing racist graffiti before anyone sees it. But it also requires people fighting racism to take certain risks, and confront racism when they see it playing out right in front of them.

The forum then moved into the Q&A session. I posed the question of how can people who have genuine questions about Islam or the Muslim community ask them without being perceived as being racist. One such example is what is termed as barbaric cultural practices, such as female genital mutilation (FGM). Massa replied that Islamophobia relies on an archetype, an artificial framing of a stereotype, in order to fuel it. She said FGM is a cultural practice, not a religious one, and FGM is not mentioned anywhere in the Qu’ran.

Massa then said it’s similar to how the media has framed ‘honour killings’ for Muslims. When you see a non-Muslim husbands kill their wives for alleged unfaithfulness, that is termed as ‘gender based violence’, but Massa asked isn’t that also a form of honour killing? After all, the man’s honour was affected. But the media does not frame it that way and a double standard gets applied for Islamic communities when they get the ‘honour killing’ label, though this is by no means justification for such crimes.

Frankly, this whole discussion is the most important to young Muslims who are either in high school or university, and most of those in attendance were of that demographic. One student said she was asked by the PDSB to sign a form when she wanted to pray on Fridays, highlighting bureaucratic hurdles she and others like her have to do in order to engage in their religious practices.

We should all be vigilant that in 2017, racism is still alive and well and despite the fact we live in one of the more diverse and open communities in Canada, we should not be complacent if we see this kind of white supremacist activity occurring in Mississauga.