Does Mississauga Do Enough to Recognize Black History Month?

Recently, I attended a Black History Month event hosted by Mississauga Centre MP Omar Alghabra. He invited one of his fellow Liberal colleagues, Whitby MP Celina Caesar-Chavannes, to have what was billed as ‘a frank conversation about issues of race and stereotypes’ at the Noel Ryan Auditorium in the Mississauga Central Library. Alghabra, who is currently the Parliamentary Secretary to the Global Affairs Ministry focusing on Consular Affairs, has experienced his share of trolling on social media, such as the bizarre accusation that he’s an “an Islamist,” or somehow in league with radical Islam. The most prominent criticisms come from Ezra Levant, the founder of the controversial Rebel Media. His Twitter feed is also inundated with hateful replies to his tweets, which Alghabra has somehow managed to respond to in good nature.

As for Caesar-Chavannes, being a black woman elected to the House of Commons has unfortunately led to some experiences of discrimination and ‘micro-aggressions’ on Parliament Hill, which she outlined in a recent Facebook post.

A lot of people in attendance outlined their own experiences as well, such as an elderly black woman who told the crowd that one time when she was staying at a hotel, another guest asked if she could get a fresh towel for her room, while other people asked what kinds of programs are available to educate the public about racial discrimination. Most of the educational component resides in provincial jurisdiction, so there was nothing concrete from the federal MPs in terms of answers to those questions.

But while this was an event which more or less offered a more candid discussion about race and discrimination during BHM, it was organized only by a federal MP representing a constituency in Mississauga. There was also a panel discussion on BHM hosted by Dixie Bloor Neighbourhood Centre on the same day, and a group called the Citizens for the Advancement of Community Development is hosting a BHM of their own on February 27. 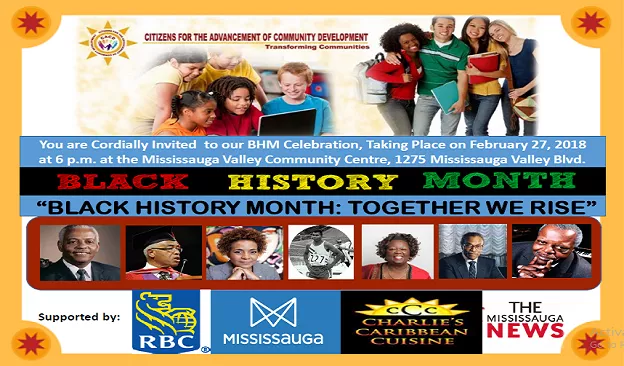 However, this is all basically a patchwork of Black History Month events around the city, and some were wondering if there was anything more centrally coordinated by the city. According to this tweet by Mayor Bonnie Crombie, in response to a constituent asking for more support for the black community, the city does not host events for any other group; all BHM events in Mississauga have been hosted by libraries, museums and art galleries:

For context, we do not do host city-sponsored events for any other groups either. The Great Hall and many of our facilities are used for celebrations, which the Mayor and Councillors attend. Our libraries, museums, and art galleries do offer #BHM programming.

In comparison, the City of Toronto, besides having events hosted at libraries and museums, does have official events recognizing BHM at their respective civic centres.

Even in Oakville, a smaller municipality with fewer revenues than Mississauga, there was an event to mark BHM sponsored by the Canadian Caribbean Association of Halton, which featured a number of musical and cultural performances. Based on these examples, perhaps this is something worth exploring while not costing too much money for Mississauga to invest money in.

Could Mississauga support a more central event, like in Toronto and Oakville, and create a dedicated webpage to highlight existing plus future events and resources?

Then again, when you have a predominantly Caucasian composition on Mississauga City Council, the real life experiences and needs of black Mississauga residents are more often than not missing from the wider conversation in regards to how city policy gets implemented.

Maybe it’s time some people of colour get elected to City Council.

A major clothing brand is closing in Mississauga, Oakville and Burlington malls
If you regularly shopped at Topshop/Topman, a UK-based brand located inside various Hudson's Bay stores in Mississauga and Halton, you might be sad to hear that the company will be exiting Canada f
END_OF_DOCUMENT_TOKEN_TO_BE_REPLACED