The classic look of Triumph from the 1980s. From left, Gil Moore, Rik Emmett and Mike Levine

Mississauga-based power trio Triumph created a sensation in rock and roll with a combination of music and their pyrotechnical shows. Now fans of the band and the musical industry will see what created that magic power through a documentary.

Triumph: Rock and Roll Machine will debut at the Toronto International Film Festival on September 10 and tells the story of drummer/singer Gil Moore, bassist/keyboardist Mike Levine and guitarist/singer Rik Emmett and how they became so prevalent in Canada and the United States in the 70s and 80s.

The documentary begins with how Moore and Levine were looking for a guitarist/singer in 1973 and found Emmett and what evolved from there. The trio were interviewed collectively and individually but have not seen the finished production, only some rough cuts.

“When you watch in a long format it’s different than a single memory because it’s a collection of memories and they are all real, even though there’s three lenses into what happened,” Moore said.

“The why part for the idea is you start to realize there’s a lot of history there and it’s kind of cool to capture it. You’re thinking of your own kids and how this would be really cool for them, and then you think about the fans, and then in terms of the band’s perspective. When I talked to Mike and Rik they said it would be fun to do it, too. We had a lot of laughs doing it.” 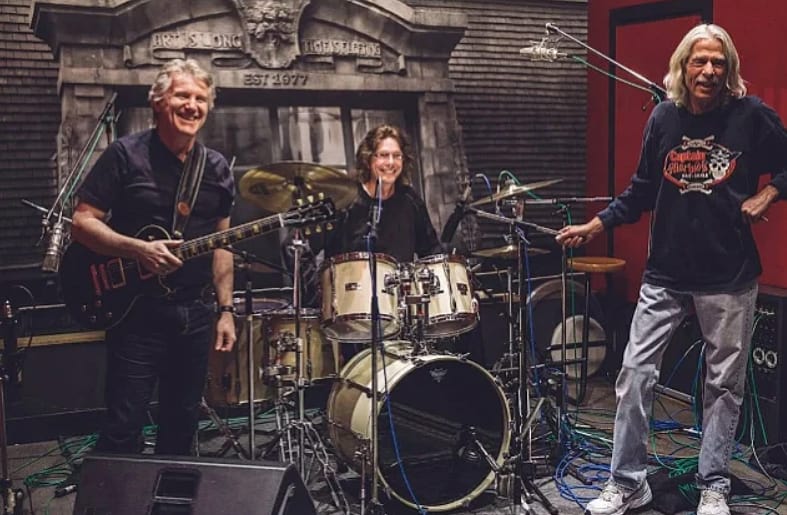 Moore said he developed the idea for a documentary six years ago and approached Ron Suter, Executive Vice-President of NBC Universal, seeking and receiving some funding. Moore subsequently approached Don Allan of Revolver Films to direct it.A concept was developed and that led to additional funding from Slaight Music, Bell Media, Rogers Media, Round Hill Music and Live Nation.

“Money wasn’t an issue; it was just a matter of getting it shot,” Moore said. “I’m grateful to all the financiers that funded it and all the people that worked on the film.”

The documentary addresses the on-going question of why Triumph quit during its peak in 1988, 13 years after the band began, theirindividual stories afterward and how they reunited for some shows in 2008.

Emmett, who left to pursue his own musical interests, revealed in the documentary he realized he broke the hearts of his band mates with his departure. But Moore publicly indicated for the first time he was caught up in a blur at the time because of the passing of his father, whom he admits was his best friend.

“It was hard to talk about it, but the director was asking us to be forthcoming with some things that really explained what happened,” Moore said. “I’ve watched many documentaries where the person being interviewed is kind of obfuscating. Those documentaries are bad.”

The band was inducted into the Canadian Music Industry Hall of Fame in 2007, the Canadian Music Hall of Fame in 2008 and Canada’s Walk of Fame in 2019. The documentary features footage from Triumph’s Superfan Fantasy on November 16, 2019 at MetalWorks Studios, which Moore founded and ownsin Mississauga. Invitations were granted to 150 fans, and it was Burlington’s Nancy Inch, a self-described Triumph Superfan, who handpicked the invitees. Inch sent Moore a letter asking if a tour of MetalWorks could be provided for 50 fans. That led to the fan event a year later and the concert featuring the songs – When The Lights Go Down, Lay It On The Line and Magic Power – that are captured in the film. The band practiced about 10 times for their first live performance in 11 years.

“To see them playing, there’s really no words to describe it other than absolute magic,” Inch said.

The obvious question is, will Triumph reunite for a tour? Moore said the MetalWorks Production Group is pursuing technology using three-dimensional projection to do a Triumph tour employing actors in what would be like a biopic movie.