Do You Watch the Steelheads in Mississauga? 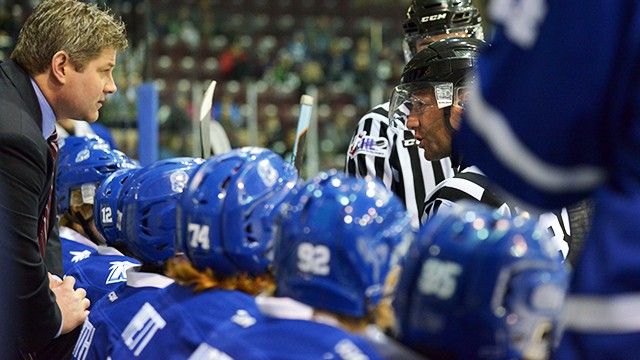 It’s no secret that Mississauga–much like many other 905 municipalities–has what we commonly refer to as a “Toronto problem.”

It’s the challenges the city faces when it attempts to highlight and attract people to more local teams, organizations and attractions. With a world class city right next door–one with internationally renowned sports teams, theatres, museums, galleries and more–it’s hard for Mississauga to carve out a niche and keep people in town for big events.

In fact, the owner of the Mississauga Steelheads, the city’s very own Ontario Hockey League (OHL) team, is working to renew the team’s contract with the Hershey Centre (soon to be renamed the Paramount Centre) for five years.

“The Hershey Centre has always been their home arena,” says Elliott Kerr, owner of the team and Landmark Sport Group.

Kerr is open about how difficult it can be to operate an OHL team in a city close to TO–even when that city has well over 700,000 people. That said, he’s never backed away the from the challenge.

Kerr initially bought the team, then known as the Mississauga St. Michael’s Majors, from Ottawa Senators owner Eugene Melnyk about six years ago.

“I purchased the team and changed the name,” he says. “I wanted the name to connect with the local community. Every year, the steelhead salmon go up the Credit River. We also wanted to be kid and family-friendly, our mascot is a steelhead salmon.”

Right now, Kerr is negotiating the lease–which ends this year–with the city.

“We’re getting close, and I’m very comfortable saying that we will be in the Hershey Centre next year. We have some issues relating to the length of the agreement. We’re looking at a five year extension, but it’s the parameters of the deal,” he says, adding that the parameters are financial in nature.

The city expects negotiations to wrap up by April 30.

“The City negotiated a memorandum of agreement on key terms of a new agreement with the Steelheads last fall,” says Shari Lichterman, director, Recreation. “We are currently working through the details of a full agreement based on that MOA. We expect to have that completed by April 30. The discussions have been around a five-year term.”

And while Kerr is confident that the Steelheads will continue to call the Hershey Centre home, he’s candid about the challenges inherent in “getting butts in seats,” (so to speak) and open about how creative the team has to be to remain a focal point in the community.

He’s also happy to say that more people are coming out to watch their local team.

“Our attendance is up, which we’re thrilled about. Our corporate sponsorships are up, all our revenue factors are improving. Our local and community support is improving,” he says.

Still, he has his work cut out for him.

“It’s always challenging in this marketplace with a population of close to 800,000–there’s no daily newspaper, no news station, no radio station. It’s a task that we’re up for and we engage the community. We have school programs, our minor hockey programs, our corporate hockey programs. It’s multi-pronged and it’s a lot of grassroots marketing,” Kerr says.

The team does indeed have to find ways to stay top of mind–and it does so by appealing to local families.

A few weeks ago, the Steelheads invited families and their furry friends to the Hershey Centre to watch the team’s Pucks ‘N’ Paws game. Attendees who purchased tickets for the designated dog-friendly area were allowed to bring their dogs at no additional charge.

In fact, the event actually featured a dog dropping the puck at centre ice.

The team also stays on top of major movements and events.

“We had Pink the Rink in support of breast cancer [research], a School Day Game with 6,000 kids in our building, we had a Family Day game on Family Day, we had a Teddy Bear Toss at Christmas for underprivileged families,” he says.

Kerr also emphasizes the success of many Steelheads players.

“A number of our players have been first round NHL draft choices,” he says. “We’ve had a lot of players that are heading into successful careers.”

As for what the future holds, Kerr is optimistic.

“We’ve put in place many building blocks over the past years. I’m encouraged by where we are and I’m optimistic about where we’re going. We’re very active on social media. We’ve got lots of new things planned for next year, stay tuned.”